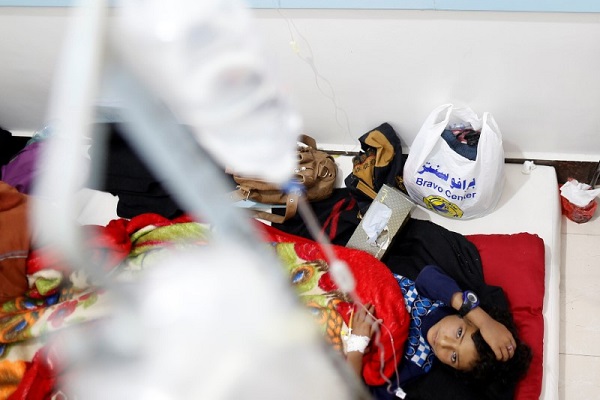 A boy infected with cholera lies on the ground at a hospital in Sanaa, Yemen May 7, 2017. REUTERS/Khaled Abdullah

SANA’A — The World Health Organization says a rapidly spreading cholera outbreak in Yemen has claimed 1,500 lives since April and is suspected of sickening 246,000 people.

WHO representative in Yemen Dr. Nevio Zagaria said in a news conference in Sanaa on Saturday that the number of suspected cases in the country’s second outbreak of cholera in six months has multiplied tenfold in the last two months.

The death toll rose from 1,300 as announced two weeks ago by WHO, which put the number of suspected cases at 200,000 at the time. The organization said that a quarter of those killed by the disease in the war-torn country are children.

A two-year Saudi-led campaign against Houthi rebels has damaged infrastructure and caused medicine shortages in the Arab world’s poorest country.