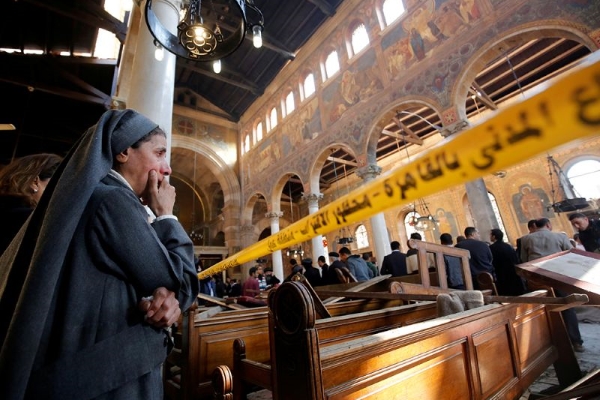 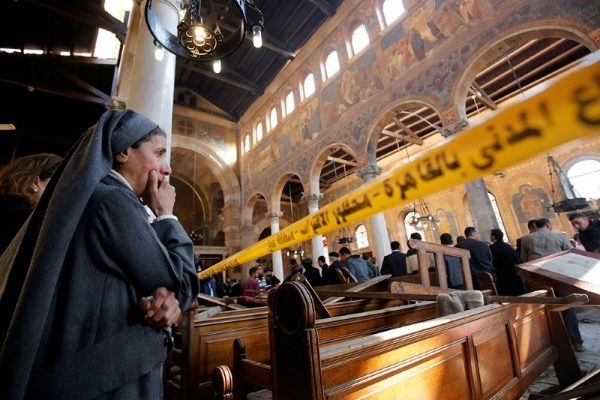 The attacks in the Nile Delta cities of Tanta and Alexandria followed a Cairo church bombing in December and came weeks before a planned visit by Catholic Pope Francis intended to show support for Egypt’s Christian minority.

Sisi declared the “three-month” state of emergency, which he must present to parliament within a week, during a defiant speech warning that the war against the jihadists “will be long and painful”.

The first bombing at the Mar Girgis church in Tanta city north of Cairo killed 27 people, the health ministry said.

Emergency services had scrambled to the scene when another blast rocked St Mark’s church in Alexandria where Coptic Pope Tawadros II had been leading a Palm Sunday service.

Seventeen people including at least four police officers were killed in that attack, which the interior ministry said was caused by a suicide bomber who blew himself up when prevented from entering the church.

The ministry said Tawadros was unharmed, and a church official said he left before the explosion.

The private CBC Extra channel aired footage of the Alexandria blast, with CCTV showing what appeared to be the church entrance engulfed in flame and flying concrete moments after a guard turned a man away.

Eyewitnesses said a police officer detected the bomber before he blew himself up.

At least 78 people were wounded in Tanta and 40 in Alexandria, the health ministry said.

Egyptian officials denounced the violence as an attempt to sow divisions, and Francis sent his “deep condolences” to Tawadros.

Egypt had been ruled under emergency law — which allows police expanded powers of arrest and surveillance — for decades before 2012.