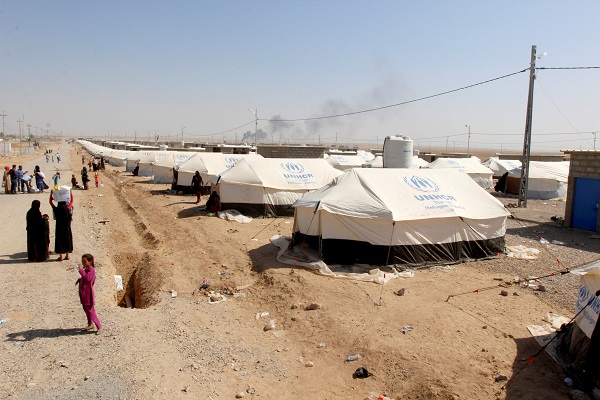 People who fled the Islamic State's strongholds of Hawija and Mosul, receive aid at a camp for displaced people in Daquq, Iraq, October 13, 2016. REUTERS/Ako Rasheed

The devastating conflicts gripping the Middle East and North Africa have left 30 million people unsure of their next meal, the UN Food and Agriculture Organisation said, according to AFP.

“Food security and nutrition levels in the Near East and North Africa have sharply deteriorated over the last five years,” the agency said in a report released Monday, March 27.

“The prevalence of severe food insecurity in the adult population… was close to 9.5 percent in 2014-2015, representing approximately 30 million people,” it said.

“Countries such as Iraq, Sudan, Syria and Yemen have rates that are among the highest in the world, reflecting the devastating impacts of the ongoing conflicts on their food security and nutrition situation.”

FAO Assistant Director General and Regional Representative Abdessalam Ould Ahmed said that conflict was hampering efforts to cope with the severe water shortages affecting agriculture in many countries in the region.

“A peaceful and stable environment is an absolute precondition for farmers to respond to the challenges of water scarcity and climate change,” he said.

Yemen, which is the Arab world’s poorest nation and has seriously depleted its underground water sources, has seen food security deteriorate dramatically since its civil war escalated two years ago with the intervention of a Saudi-led coalition.

A third of its 22 provinces are on the brink of famine, the UN World Food Programme warned on Friday, adding that 60 percent of its population of 17 million was going hungry.

The FAO said that the six-year-old civil war in Syria was also having a devastating effect on access to food for civilians.