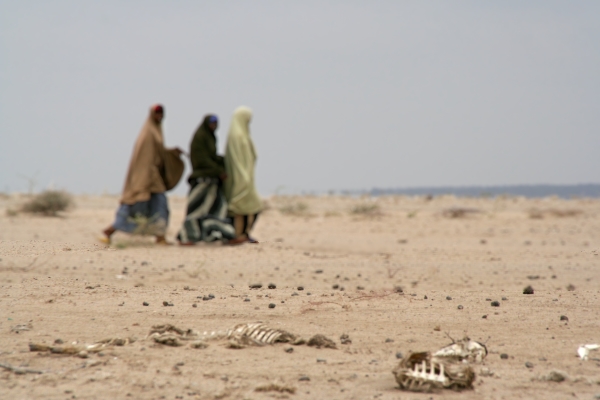 A group of women travel through the desert in Kenya. Short rainfall from October to December of 2005 caused Kenyans in the Horn of Africa to experience a severe drought throughout early 2006. Some 2.5 million people were affected and required immediate humanitarian assistance. 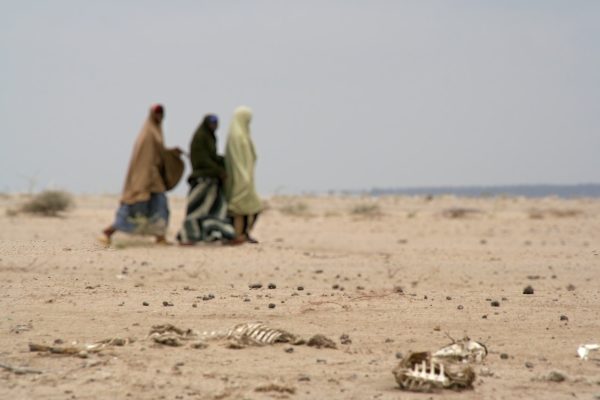 Somalia’s new president declared a national disaster Tuesday, February 28 for a drought that threatens millions of people and is creating fears of a full-blown famine, The Associated Press reports.

The statement from the office of President Mohamed Abdullahi Mohamed said he has appealed for help from the international community and Somalia’s diaspora of 2 million.

Combating the drought is a priority for Mohamed, who was elected this month to lead this fragile Horn of Africa nation also coping with attacks by the Islamic extremist group al-Shabab.

The United Nations humanitarian office estimates that 5 million people in Somalia, or nearly half the country’s population, need aid.

Thousands have been streaming into Somalia’s capital, Mogadishu, in search of food aid, overwhelming local and international aid agencies. Over 7,000 internally displaced people checked into one feeding center recently.

Because of a lack of clean water in many areas, there is the additional threat of cholera and other diseases, UN experts say.

The government earlier this month said the widespread hunger “makes people vulnerable to exploitation, human rights abuses and to criminal and terrorist networks.”

The UN humanitarian appeal for 2017 for Somalia is $864 million to provide assistance to 3.9 million people. But last month, the UN World Food Program requested an additional $26 million plan to respond to the drought.

Somalia was one of four regions singled out by the UN secretary-general this month in a $4.4 billion aid appeal to avert catastrophic hunger and famine, along with northeast Nigeria, South Sudan and Yemen. All are connected by a thread of violent conflict, the UN chief said.