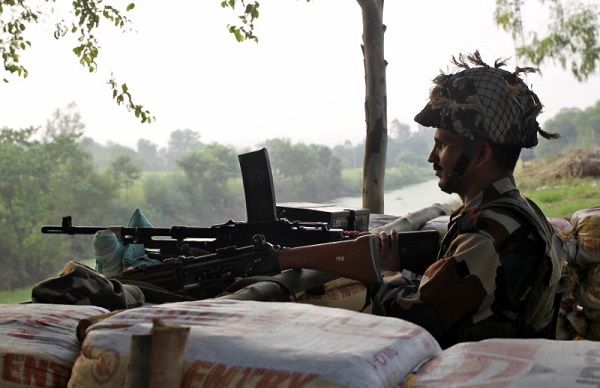 An Indian army soldier keeps guard from a bunker near the border with Pakistan in Abdullian, southwest of Jammu, September 30, 2016. REUTERS/Mukesh Gupta

India’s newly appointed army chief has said the military is “prepared for a two-front war” with Pakistan and China if a conflict breaks out with both the countries simultaneously. General Bipin Rawat said the armed forces will not hesitate to use force in any form whenever it is deemed necessary.

“The fact that terrorists infiltrating from adversary’s side means that they are getting support from them [Pakistani forces],” Rawat said in an interview with an Indian news channel. “We also have to think ahead, and the ball has already rolling in that direction.”

Rawat, a counter-insurgency specialist, took over as the army chief at the start of the year after superseding two senior officers triggering a brief controversy over the appointment. The government has defended Rawat’s choice.

He has been giving interviews to local channels spelling out his priorities. He told broadcaster NewsX: “As far as the armed forces are concerned, we are tasked to be prepared for a two-front war and I think we are capable of carrying out our task in whatever manner that we may be asked to do by the political hierarchy.”

Rawat, however, emphasised that armed confrontation with neighbouring nations should be the last option and said differences need to be ironed out through cooperation. He said meetings of border personnel are being held at the frontier positions with China so as to maintain the channels of communication with Beijing’s forces. “This is to ensure that while we may be competing with each other for space, economic development and prosperity, there are also areas of cooperation,” said Rawat.

India has seen tensions rise frequently both with China and Pakistan in the past few months over a series of cross-border incidents.
Tags: china General Bipin Rawat India Kashmir Pakistan partition Peace