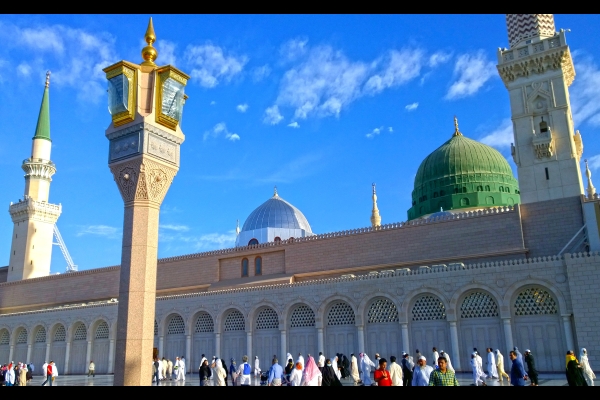 However, while the fact of this love has not changed, its nature has. It has taken different forms than what we find in the early generations. The Companions were the special people who came in direct contact with Allah’s Messenger, Sall-Allahu alayhi wa sallam, learned from him, joined his struggle, gave the most sacrifices for it, devoted their lives for his mission, and earned the credentials for being the model disciples, followers, and devotees.

Among them was Sayyidna Mus’ab ibn Umayr, Radi-Allahu anhu. As a young pagan in Makkah, he was the best dressed, the best cared for youth. Clad in the most expensive silk and wearing the best perfumes, he would leave a trail of fragrance wherever he passed by. Then something happened. He met the Prophet, Sall-Allahu alayhi wa sallam, and his message penetrated the depth of his heart. Life changed drastically. His pagan mother, who used to love him before, now despised him and began to punish him severely. His was a transformation from riches to rags. Once the Prophet, Sall-Allahu alayhi wa sallam, saw him covering his body with a patched up old hide and showing the signs of rough life that he had embraced. He said, “I saw this young man some years ago in Makkah. There was none at that time who was more handsome, was living a more luxurious life, or was better dressed than him. But today he has sacrificed all the comforts of this life for the love of Allah and his Prophet.” He was the first teacher of the Ansar in Madinah and the standard bearer of the Muhajireen in Badr. When he was martyred in Uhud, there was not enough cloth to cover his body completely; grass was used to supplement the small burial cloth. According to some reports, the Prophet, Sall-Allahu alayhi wa sallam, stood by his body and recited the verse: “From among the believers there are some men who fulfilled their pledge with Allah.”

Among them was Sayyidna Sa’d ibn Mu’az, Radi-Allahu anhu, the leader of the Ansar. The Ansar had provided hospitality and protection to the Prophet, Sall-Allahu alayhi wa sallam and the Makkan Muslims, but soon they faced a bigger challenge. Would they be ready to fight against the much larger and better equipped Makkan army? His powerful words in the meeting before Badr captured the spirit of their commitment. “O Rasulullah, we have believed in you, affirmed your Prophethood, and pledged obedience. By Allah, who has sent you as a Messenger, if you were to command us to jump into the ocean we will do that. Not one soul among us will remain behind. Insha-Allah you will find us steadfast in the battle.”

Among them was Sayyidna Jareer ibn Abdullah, Radi-Allahu anhu. Once he sent his servant for buying a horse. The servant made a deal for three hundred dirhams and brought the seller with him so he could be paid. Sayyidna Jareer ibn Abdullah, Radi-Allahu anhu, looked at the horse and realized that the seller had undervalued it. “Would you sell it for four hundred?” he asked. The seller agreed. “How about five hundred?” he continued his unusual “bargaining” and finally bought the horse for eight hundred dirhams. He was later asked why he did so. “The seller was not aware of the true value of this horse, ” he explained. “I have simply given him a fair price because I had promised to Prophet Muhammad, Sall-Allahu alayhi wa sallam, to always be sincere and well-wisher for every Muslim.”

Among them was the unnamed person who was wearing a gold ring. It is prohibited for Muslim men to wear gold. The Prophet, Sall-Allahu Alayhi wa sallam, took his ring and threw it on the ground, saying it was like wearing burning charcoal from Hell. Later on people suggested to him to pickup the ring as it could be used for other legitimate purposes. But he refused saying: “No, by Allah, I will never take it, when it has been thrown away by the Messenger of Allah.”

These are just some random glimpses into the lives and minds of the great Companions. Their life accounts are full of such examples. They accepted his Prophethood from the bottom of their hearts, knowing fully what that means. From that point on, their lives revolved entirely around this belief. They loved the Prophet, Sall-Allahu alayhi wa sallam more than anybody else in the world. They intently observed his actions and listened to his words. They remembered him all the time. They obeyed each and every one of his commands. They never said, “This is only a Sunnah,” meaning it can be ignored. They never asked why a command was given. They never sought excuses. Within the home and outside it, in business or on the battlefield, in their private gatherings or in the courts of kings and emperors, everywhere they were the most obedient servants of Allah and the most obedient followers of the Prophet, Sall-Allahu alayhi wa sallam.

None of them ever celebrated Prophet’s birthday. They did not need to have a day or a month devoted to the Prophet, Sall-Allahu alayhi wa sallam, because they had devoted their entire lives to him.

Today our lives and our outlooks bear little resemblance to theirs. We praise but do not listen to him; we claim to love, but refuse to follow; we claim to believe but lead lives like those who don’t. We emphasize what the Companions ignored and ignore what they emphasized.

They loved the Prophet, Sall-Allahu alayhi wa sallam, and had their lives to show for it. And we? Can we honestly say that we love the Prophet as he should be loved?