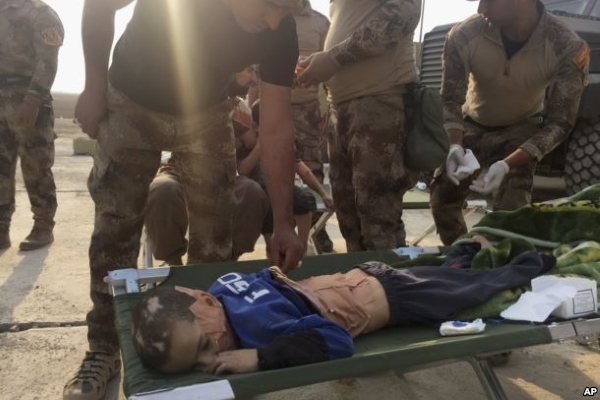 Soldiers give the first aid to a boy injured during the clashes between Iraq's elite counterterrorism forces and Islamic State militiants in the village of Tob Zawa, about 9 kilometers (5½ miles) from Mosul, Iraq, Oct. 25, 2016. Source: VOA News

The International Organization for Migration says more than 10,000 Iraqis have been displaced since the start of an operation to retake the northern city of Mosul from ISIS militants.

The United Nations warned last week that as many as 200,000 people could be displaced in the initial weeks of the fight for Mosul, and that humanitarian groups would initially be able to handle about 70,000 people in need of aid.

Iraq’s displacement and migration ministry said Wednesday the number of displaced was increasing, and that on Tuesday there was a “big wave” of 3,300 people in what was considered the largest number of people fleeing since the Mosul operation began.

The United Nations said Tuesday it had preliminary reports of extrajudicial killings and summary executions by ISIS fighters around Mosul, including the militants using civilians as human shields.

U.N. human rights spokesman Rupert Colville told reporters in Geneva the reports have not been fully verified, but include ISIS killing 50 former Iraqi police officers they had been holding in a building outside Mosul, and in the village of Safina fighters killing 15 civilians and throwing their bodies in a river.

Colville said there were also reports of Iraqi forces finding the bodies of 70 civilians with bullet wounds in an area south of Mosul, but that it was unclear who was responsible for the killings.

He reiterated calls for Iraq and allied forces to make sure their fighters to act according to international humanitarian law. On Monday, U.S. officials said Iraqi forces had regained more than 800 square kilometers of territory from ISIS around Mosul.