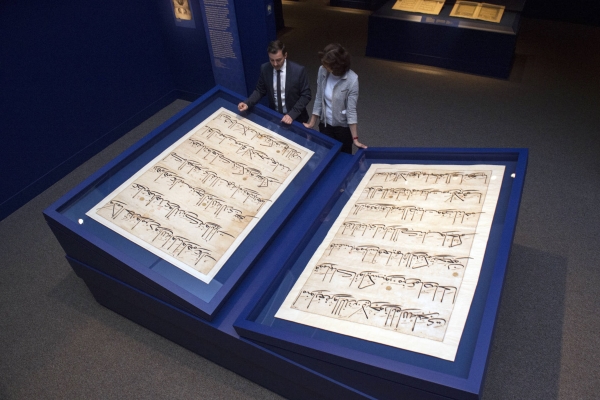 Simon Rettig, left, and Massumeh Farhad, curators of the exhibit "The Art of the Qur'an: Treasures from the Museum of Turkish and Islamic Arts," look at pages from a 5-foot by 7-foot Quran displayed as part of the exhibit, at the Sackler Gallery in Washington, Thursday, Oct. 20, 2016. (AP Photo/Molly Riley)

WASHINGTON (AP) — Books come in all sizes, but one 15th century Quran was so enormous, it’s said that a wheelbarrow was needed to carry it.

Two consecutive pages of this Quran will be on display during the show “The Art of the Qur’an: Treasures from the Museum of Turkish and Islamic Arts,” which opened Saturday at the Arthur M. Sackler Gallery.

The sprawling pages, each measuring 5 feet by 7 feet, have rows of calligraphy standing 8 to 9 inches high. They date from about 1400, and have been on long-term loan with the Smithsonian museum.

The passage on display is from a chapter explaining that “signs of God and evidence of His goodness are all around,” according to Simon Rettig, assistant curator of Islamic Art. It also deals with the refutation of materialistic views, the history of some ancient peoples, warnings to those who go astray and encouragements to forgiveness.

“If anyone does a righteous deed, it ensures to the benefit of his own soul; If he does evil, it works against his own soul,” one passage reads.

Like many items in the exhibit focused on the Muslim holy book, these pages come with a story — this one involving the feared nomadic conqueror, Timur, who ruled a huge empire based in central Asia.

As the story goes, Timur — also named Tamerlane by Europeans — was unimpressed by the artistry required to create a Quran tiny enough to fit inside a signet ring. So this calligrapher, Omar Aqta’, gave it another try, this time going large to show off his “incredible talent.”

While the feat of creating a tiny Quran likely required more skill, it is amazing that the calligrapher had the “bravery to attempt something like this,” said Massumeh Farhad, chief curator at the Sackler and Freer and curator of Islamic art.

Omar Aqta’ returned with a Quran so large, it was carried to the palace in a wheelbarrow, and she said, Timur, “a man who loved big things,” was so pleased that he rewarded the calligrapher handsomely.

While it was not unusual for Qurans to be broken up, it’s not clear whether the folios of this Quran were ever bound into one volume, Farhad said. There would have been thousands of pages, but most have been lost to history, with only about 10 surviving. The two pages on display were among those found by a British traveler in a mausoleum in eastern Iran in the 19th century.

The show brings together manuscripts and folios from the museum in Istanbul with manuscripts from the collection of the Sackler and Freer Gallery of Art, which together form the Smithsonian’s Asian art museum.

Though the Arabic text of the Quran was fixed as early as the late 7th century, the exhibit showcases the variety of styles of calligraphy and illumination employed over the centuries. The works span nearly a millennium, dating from the late 7th or early 8th centuries (not long after the time of Muhammad) to the 17th century.