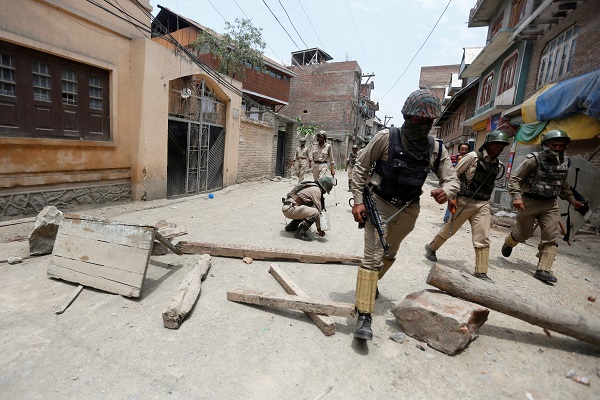 Indian policemen chase away protesters during a protest against the killing of Burhan Wani, a separatist militant leader, in Srinagar, July 10, 2016. REUTERS/Danish Ismail

India stepped up patrols along its de facto border with Pakistan on Monday, September 19 after gunmen killed 18 soldiers at a nearby army base, as Prime Minister Narendra Modi’s administration weighed its response to an attack India blames on its neighbor, Reuters reports.

The assault, in which four commando-style gunmen burst into the brigade headquarters in Uri at 5.30 a.m. (1 a.m. British time) on Sunday, was among the deadliest in Kashmir and has sharply ratcheted up tension between the nuclear-armed rivals.

Army officials said some of the critically wounded had been flown to a hospital in New Delhi and one had died while undergoing treatment. Most of dead and wounded suffered severe burns after their tents and temporary shelters caught fire from incendiary ammunition while they were sleeping.

Pakistan accused India of apportioning blame before it had properly investigated.

“Pakistan categorically rejects the baseless and irresponsible accusations being levelled by senior officials in Prime Minister Modi’s government,” the foreign affairs adviser to Pakistan’s prime minister said in a statement late on Sunday, according to Reuters.

The army said that India was promoting a “hostile narrative”.

Kashmir, divided between India and Pakistan since 1947, is at the heart the neighbors’ seven decades of mutual distrust. Two of their three wars since independence from Britain have been fought over the region.