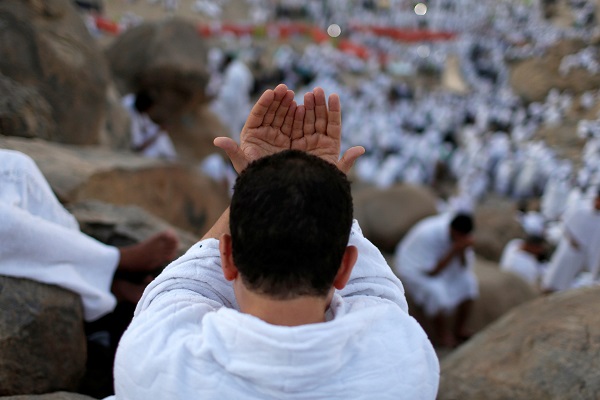 A Muslim pilgrim prays on Mount Mercy on the plains of Arafat during the annual haj pilgrimage, outside the holy city of Mecca, Saudi Arabia September 11, 2016. REUTERS/Ahmed Jadallah

Once again more than one and a half million believers were honored to become the “Guests of Allah” and through Divine Guidance have completed the rituals of Hajj with great love and enthusiasm. How fortunate are those souls who are blessed with the following words from Rasulullah (Allah’s peace be upon him):

“Whoever performs Hajj for the Pleasure of Allah and therein utters no word of evil, nor commits any evil deed, shall return from it (free from sin) as the day on which his mother gave birth to him.” (Bukhari, Muslim)

“Verily there shall be no reward for a Mabroor (Accepted) Hajj except Jannah.” (Bukhari, Muslim)

It is hoped that all the Pilgrims were sincere in their intentions and had travelled thousands of miles only to secure the Pleasure of Allah by fulfilling the obligation laid down upon them. May Allah the Almighty grant all the Pilgrims acceptance and grant them opportunity again and again to visit the Sacred Land. Ameen Ya Rabbal A’lameen.

Nevertheless, we wish to draw the attention of the Pilgrims towards certain points that are necessary and of utmost importance to observe about which many Pilgrims seem to attach little importance.

Firstly, the sincerity of intention should remain even after the performance of Hajj. There should be no pomp or show. One should not wish to be called or recognized as a Haji. Many people adopt the habit of talking frequently about their journey in order that people may come to know of their Hajj. They talk about the expenses incurred in the way of Allah, their charity amongst the poor and needy, their devotion and worship, their assisting the weak and old, etc. and all this is mentioned with the intention of gaining fame. This is a deceit from Shaytan who ruins the Ibadah (worship) of the person who is unaware of it. It is therefore of great importance that the Pilgrim does not talk about his/hers Hajj without necessity as it may lead to Riya (show, insincerity). However, if necessity arises and one must talk about his/hers Hajj then he/she is at liberty to do so. But, the Pilgrim must not indulge in this type of conversation unnecessarily.

Secondly, it is noted through experience that many Pilgrims return with nothing but the sad memories to reflect upon and this darkness filters through their tongues to the extent that they talk only about the hardships they have encountered during Hajj. The Pilgrims should strictly refrain from this. On the contrary, they should talk about the greatness of the Sacred Places, the spiritual gains, the enjoyment in devotions of Haramayn – Umrah, Tawaf, Salam on the Sacred Grave, Salah in Masjidul Haram and Masjidun Nabawi etc. If one looks at his/hers journey of Hajj carefully he/she will find that the spiritual benefits far outweighs the physical hardships. Every second spent in these Sacred Places is incomparable with anything in the world.

The journey to Hajj is a long journey; one has to travel by air, pass the immigrations, go through the customs, encounter people who speak foreign languages, etc. In these circumstances, difficulties are certain to arise. When we travel in our country, do we always travel with comfort and ease? Do we never encounter difficulty? Do we not find ourselves held up in traffic for hours on a Motorway? Considering the fact that 3-4 million Pilgrims perform the rituals of Hajj at one time, in one place and that they all come from different countries and backgrounds and that many of them have never before used or seen the facilities available to them, we think the difficulties encountered are insignificant. Moreover, the Pilgrims are rewarded abundantly by Almighty Allah upon every difficulty encountered in their journey whereas the same is not the case whilst we undertake other journeys.

Those people who engage in these types of conversation become the cause of discouragement to others who have not yet had the opportunity to perform Hajj. These unfortunate Pilgrims fall into the category:

“…and who stop (men) from the way of Allah, and from the Sacred Masjid,…”

mentioned in Surah Al-Hajj (22:25) in the Holy Quran. They should take heed that if people are discouraged by their conversation and postpone their Hajj then those who have discouraged them will be in part responsible.

Thirdly, the sign of a `Mabroor Hajj‘ or `Accepted Hajj‘ is that upon one’s return, his/her life changes from worst to good. He/She becomes totally punctual in fulfilling the commands of Almighty Allah. His/Her love and inclination towards the Hereafter increases and love for the worldly pleasure decline. Therefore, it is essential that the Pilgrim is watchful over his/hers actions and conversations and should try his/her utmost to instill in himself/herself good characters and refrain from all types of evil. He/She should endeavour to fulfil the obligations laid down by Almighty Allah and avoid all the things forbidden by Him.

He should be punctual with the recitation of the Holy Quran and in performing his five times Salah with Jama’ah in the Masjid.

Fourthly, the Pilgrim should adopt the Sunnahs of our Prophet Muhammad (Allah’s peace be upon him) especially with regards to males appearance i.e. his clothes, his beard, and so on.

The ladies must also dress according to the Laws of Islam, especially the wearing of the Hijab.

Finally, those who have returned from Hajj should encourage and persuade other relatives and friends upon whom Hajj is compulsory (Fardh) to start making preparations from now and to go and perform this great duty of Hajj next year.