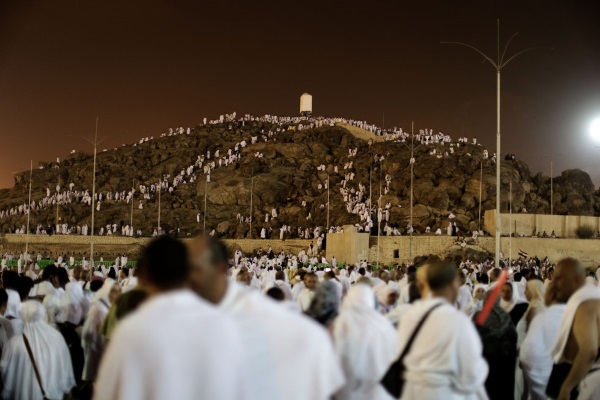 Muslim pilgrims walk toward Mount Arafat ahead of the hajj main ritual at Mount Arafat in the holy city of Mecca, Saudi Arabia, Wednesday, Oct. 24, 2012. Saudi authorities say around 3.4 million pilgrims — some 1.7 million of them from abroad — have arrived in the holy cities of Mecca and Medina for this year's pilgrimage. (AP Photo/Hassan Ammar)

Sayyidi al-Habib Umar bin Hafiz (may Allah preserve him) reminds us that the linguistic meaning of Hajj is seeking or intending. Thus the people of Allah are constantly performing Hajj because they are constantly seeking Allah. Just as their whole year is Ramadan, likewise their whole year is Hajj. Just as those performing Hajj respond to the call of Allah by saying “labbayk” they are swift to respond to the call of Allah.

They take themselves to account and leave that which is disliked and dubious in all their states and actions. They reject the desires of their lower selves and they are the furthest of people from that which is prohibited. They constantly receive new blessings from their Lord so they constantly renew their ihram.[1] Day and night they make tawaf around the House of their Lord, the One to Whom they turn themselves with absolute sincerity until nothing remains in them which is directed to other than Allah.

The bounty of Allah is available at all times of the day and night. This is why Allah swears by the morning light (duha) and by the night that He has not forsaken His Beloved (may Allah bless him and grant him peace), nor is He displeased with him.

If the Hajj has not been made possible for you, join with those making Hajj and share in their reward: by spending your wealth for the sake of Allah on your relatives, on the needy, by turning to Allah with your whole being. Make numerous your footsteps to good places, especially at the time of Fajr, and you will receive glad tidings from the Messenger of Allah (may Allah bless him and grant him peace):

“Give glad tidings of complete light on the Day of Judgement to those who walk constantly to the mosque in the darkness.”[2]

Those whose light is complete will no doubt be in his company (may Allah bless him and grant him peace) on the day on which Allah does not disgrace the Prophet and those who believe along with him. Their light stretches out in front of them and upon their right sides.[3]

Ask to be present with them, and thank Allah for allowing our spirits to be with them. So many hearts in the far East or the far West receive the gifts of `Arafat and Mina because of their truthfulness with Allah.

Actions that carry the reward of Hajj

Nothing of course can equal actually performing the Hajj and worshipping Allah in those blessed places. However, since Allah knows that many people long to make Hajj every year but are unable to do so out of His generosity He made the reward for certain actions similar to the reward of a supererogatory Hajj.

1.      Remembering Allah from Fajr until Ishraq. The Messenger of Allah (may Allah bless him and grant him peace) said: “Whoever who prays Subh (Fajr) in congregation and then sits in the place where he prayed remembering Allah until the sun rises and then prays two rakats has the reward of a complete Hajj and `Umrah.” He repeated “complete” three times.[4]

2.      Attending a gathering of knowledge. The Messenger of Allah (may Allah bless him and grant him peace) said: “The one who goes out to the mosque wanting only to learn good or teach it has the reward of a complete Hajj.”[5]

6.      Fulfilling the needs of your brother or sister. Hasan al-Basri said: “Going to fulfil the need of your brother is better for you than performing Hajj after Hajj.”

7.      Being good to your parents. The Prophet (may Allah bless him and grant him peace) commanded one of the Companions to be good to his mother. If you do so, he said: “You are a Hajj pilgrim, a person performing `Umrah and someone striving for the sake of Allah (mujahid).”

8.      Performing obligatory actions. The slave can only draw near to Allah by performing supererogatory actions after first having performed that which is obligatory. This includes purifying one’s heart from forbidden attributes and guarding one’s tongue and limbs from committing forbidden actions. All of this is much harder on the lower self than many supererogatory acts of worship.

Finally there is no action more beloved to Allah on the Day of Eid than making a sacrifice. The Messenger of Allah (may Allah bless him and grant him peace) told his beloved daughter Sayyida Fatima al-Zahra that she would be forgiven for her previous wrongdoings with the first drop of blood to be shed from the sacrificed animal. She asked if this reward was specifically for the household of the Prophet and he replied: “For us and for all the Muslims.”

[1] The state of sanctity in which the pilgrim approaches Allah