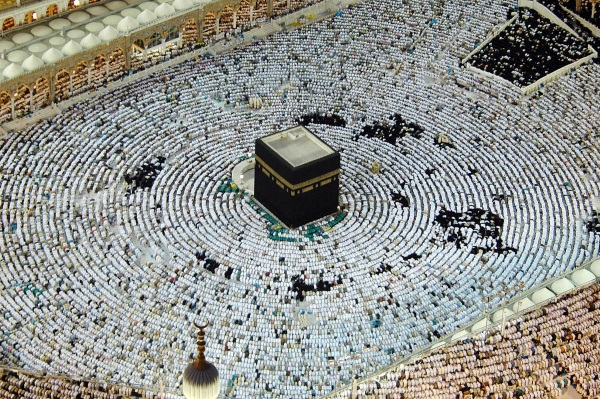 When educated Jews learn about the wonderful festivities of the Muslim Hajj, with its spiritual uplift that occurs when millions of people from all over the world travel to one holy place and join together in a traditional religious ceremony: they realize just how much we Jews have lost.

In the centuries after the second Jerusalem Temple was destroyed by the Romans in 70 CE; Jewish pilgrimage ceased. Today the overwhelming majority of Jews outside the Land of Israel live in Protestant countries where pilgrimage plays little or no role in religious life. Thus, it is very hard for most Jews to feel the tremendous spiritual uplift that occurs to pilgrims on the long path to, and amidst the mass tumult of, a very special holy and sacred place.

Both the Holy Qur’an and the Holy Bible stress the religious importance of an annual pilgrimage (Hajj in Arabic, Hag in Hebrew) to a sacred location. The Qur’an states: “So keep the three Haj (Pilgrimage) days and seven fasts when you return.” (2:196) and the Torah states: Three times a year all your men are to appear before the God of Israel. (Exodus 34:23)

The Torah also declares, “Celebrate Haj Sukkot for seven days after you have harvested the (fall) produce of your threshing floor and your winepress. Be joyful at your festival—you, your sons and daughters, your male and female servants, Levites, foreigners, orphans and the widows who live in your towns. For seven days celebrate the (pilgrimage) festival to the Lord your God… Three times a year all your men must appear before the Lord your God at the place He will choose: at the (Passover spring) Haj of Matzot, the Haj of Weeks (seven weeks later), and the (fall) Haj of Sukkot. (Deuteronomy 16:13-16)

There are several similarities in practice shared by the Muslim Hajj, and the Biblical Haj of Haj Sukkot. As Prophet Muhammad said: “It is the Sunnah of your father Ibrahim.”

On each of the first six days of Haj Sukkot it was Jewish tradition to circle the Temple alter once while reciting psalms of Prophet David. On the seventh day of Sukkot the custom was to circle the Temple alter seven times. The Oral Torah says: “It was customary to make one circumambulation around the altar on each day of Sukkot; and seven circumambulations on the seventh day.”  (Mishnah Sukkah 4:5).

Each of the seven circles done on the seventh day is done in honor of a prophet; Abraham, Isaac, Jacob, Joseph, Moses, Aaron and David, all of whom both Jews and Muslims revere.

Islamic tradition urges one who goes on Hajj to remember his or her parents and other close relatives who have passed away with pious prayers; and make-up for them if they could not fulfill their obligations for hajj.

And Jewish tradition has a special service on the last day of Haj Sukkot and Haj HaMatzot (Passover) called Yizkor; to remember parents and other close relatives who have passed away with pious prayers.

The ritual slaughter of Qurbani (Korban in Hebrew) Halal/Kosher animals toward the end of all the ritual reenactments comes to teach everyone that: “Their flesh and their blood do not reach Allah, but the devotion from you reaches Him.” (Quran 22:37). This is the same basic understanding that the Hebrew Prophets and the Rabbis gave to the offerings in the Temple of Solomon.

Thus we can understand why “Prophet Muhammad was once asked by his Companions: “O Prophet of Allah! What is this qurbani?” He replied, “It is the Sunnah of your father Ibrahim.” (Ahmad, Ibn Majah)

With the destruction of the Second Temple by the Romans in 70 CE, the pilgrimage aspect of the week long harvest festivals of Haj Sukkot and Hajj HaMatzot began a gradual decline in the spiritual consciousness of the Jewish People.

Two generations after the destruction of Jerusalem and its Holy temple, following a second major Jewish revolt (132-135 CE) in the land of Israel, the Romans rebuilt Jerusalem as a pagan city filled with idols. That stopped all Jews from coming to the ruined site of the Jerusalem Temple – Beit HaMiqdash  or Bayt al-Maqdis.

But even centuries after the destruction of the Temple, and the end of pilgrimage, generations of Jews repeated wonderful tales about their ancestors’ pilgrimage experiences in Jerusalem and its Holy Temple.

Crowded as Jerusalem was, there always seemed to be enough room to squeeze everyone in. Indeed, every year it seemed a continuing miracle that pregnant woman didn’t suffer a miscarriage, a rain shower never quenched the fire on the alter, the wind never blew smoke from the fire into the crowds of worshipers, and no one was ever bitten by a scorpion or a snake. Most amazing of all, no one complained: “It is difficult for me to find lodging in Jerusalem”. (Pirkay Avot 5:8) Also the wonderful fragrance of the Temple incense was so widespread throughout the city that brides in Jerusalem did not need to use perfume. (Yoma 39b)

Most Jews do not think that the Jerusalem Temple–Bayt al-Maqdis/Beit HaMiqdash will be rebuilt prior to the coming of the Messiah.

But it is still possible that Christian, Jewish and Muslim pilgrims will, in the future, return in peace and brotherhood to Jerusalem on Haj Sukkot as foretold by Prophet Zachariah: “In that (future) day all the survivors of the nations who came against Jerusalem will go there from year to year to worship the King, the LORD of Hosts and to observe Haj Sukkot -the (pilgrimage) Festival of Sukkot. (Zachariah 14:16)

And Prophet Isaiah predicted “In that day there will be a highway from Egypt to Assyria. The Assyrians will go to Egypt and the Egyptians to Assyria. The Egyptians and Assyrians will worship together. In that day Israel will be the third, together with Egypt and Assyria, a blessing on the earth. The Lord Almighty will bless them, saying, “Blessed be Egypt my people, Assyria my handiwork, and Israel my inheritance.”  (Isaiah 19: 23-25)

Please God, may it happen soon.