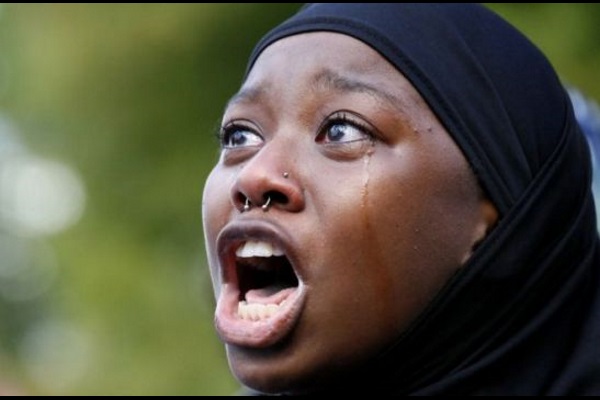 Because of her headdress, the video of Barnes became popular among American Muslims. Although Barnes is a member of the Israelite faith and not Muslim, many Muslims still connected to her words and pain. - Source: MuslimARC #BlackLivesMatter Toolkit

While reading online articles, watching video clips, and scrolling through social media, it is easy for us to forget that resistance against oppression and the struggle for equality comes with real-life consequences and perils. Many of the people embroiled in social protests, even the more peaceful ones, often find their liberty and personal safety in jeopardy.

Recently, a video of a young Black woman named Coco Barnes’ passionate speech against police brutality and the murder of unarmed Blacks in the country became viral on social media. On the video, Barnes refuses to stand down at a protest. Barnes and protestors stand in front of police in riot gear. The 17-year-old shouts, with tears in her eyes, about the pain that Blacks in this country undergo.

“I am not standing down,” says Barnes, “I am Black, and I’m proud, and I am strong! Together we are strong!”

Barnes then leads a chant of “No Justice, No Peace, No Racist Police” with protestors.

Police arrested Barnes and charged her with “resisting arrest,” “inciting a riot” and “simple obstruction of a highway”. Consequently, she now needs thousands of dollars in legal fees. The young student also became the target of numerous threats and lost her job because of them.

Barnes represents a continuum of Black women, arguably the most oppressed demographic in the United States, who risk their revenues and lives in their undertakings for justice. Their bodies are at the forefront of many social justice endeavors, and they stand in solidarity with various marginalized groups.

The United States has a historical tradition of coercion, dehumanization, and the exploitation of the legal system to flatten the lives and vigor of those who stand against injustice and oppression. When testifying before the Credentials Committee at the 1964 Democratic National Convention about her experiences after attempting to register to vote, Fannie Lou Hamer described a litany of intimidation tactics to which she was subjected. When returning home, the owner of the land on which she lived evicted her family, and Hamer was arrested and severely beaten while in custody.

Although some may argue that things are not as bad as they were back in Hamer’s time, tenacious conventions remain that demonize and victimize social protestors as they engage in fighting against our country’s racial, classist, xenophobic, and other oppressive systems. Not everyone gets to throw his or her placards in the back of the car and go home after a protest. Many protestors are harassed, assaulted by counter-protestors, arrested, and face ramifications in their daily lives because they seek to make this nation more equitable.

Because of her headdress, the video of Barnes became popular among American Muslims. Although Barnes is a member of the Israelite faith and not Muslim, many Muslims still connected to her words and pain. NbA Black Muslim activist and co-founder of Equality for HER (Health Education Rights) Blair Imani initiated the Support Peaceful Protester Coco Barnes LaunchGood project in cooperation with the Muslim Anti-Racism Collaborative to acquire funds to help Barnes get her life back.

On the LaunchGood page, Imani explains, “Coco’s charges prompted her employer to terminate her from her position. As it stands, Coco is unemployed and unable to support herself or replace her cell phone taken from her while she was in custody. This is the plight of so many of those in the movement.”

The frontlines of the fight for justice and equality are not pleasant places. Often, the most vulnerable of social justice fighters like women of color and the economically disadvantaged are subjected to numerous oppressive tactics that imperil their liberty and lives. Therefore, it is our responsibility as supporters to provide moral and financial backing to mitigate the effects of the suppression measures they encounter and not limit it to social media likes and shares.

Presently, funding is a major challenge in the resistance against injustice. For example, while other LaunchGood endeavors raised hundreds of thousands of dollars, the “Support Peaceful Protestor Coco Barnes” LaunchGood has yet to raise the modest $4,000 objective, despite appeals to donate as little as $5. The lack to efficiently fund Coco and other social justice fighters demonstrates a complacency about the significance of their work and the peril in which it frequently places them, and this needs to be rectified.

During the Civil Rights Movement, bail funds and other financial support available to those imprisoned, displaced, and who lost their sources of income helped to alleviate the resulting punishment for standing up. Similar measures are vital to continue present-day resistance against inequality. Considering Islamic teachings about helping the oppressed[1] and the placement of oppression as more heinous than slaughter[2], Muslims should feel especially compelled to subsidize calls to action that will assist social justice fighters regardless of their religion, race/ethnicity, national identity, orientation, or socio-economic background. Allah (SWT) and His Messenger (SAWS) do not apply such stipulations when it comes to oppression – neither should we.

[1] Our Noble Prophet ﷺ said,”Help the oppressed and guide those who have lost their way” (Book 41, Number 4799: Sunan Abu-Dawud).

[2] Allah (SWT) says, “And slay them (who fight against Allah’s cause) wherever you catch them, and turn them out from where they have turned you out; For persecution and injustice are worse than killing.” (Al-Quran, Suratul-Baqarah, 2:191)