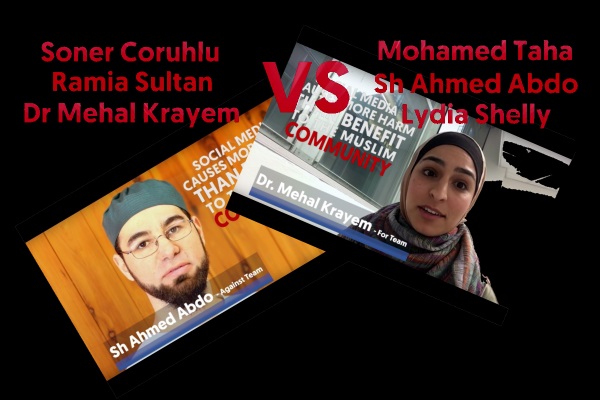 In this world of mass communication, we have never been exposed to so much information in our daily lives. Social media has changed the way people communicate with each other. It has changed the political landscapes of many countries and in some cases has brought about revolutions.

Social media has brought about much harm and benefit to the Muslim community. On the one hand, it is a great platform for communication, raising awareness, and calling people to Islam. On the other hand, social media has been the cause of several societal illnesses. Argumentation, conflict, misunderstanding, and extremism are some of the harms that comes about with social media. 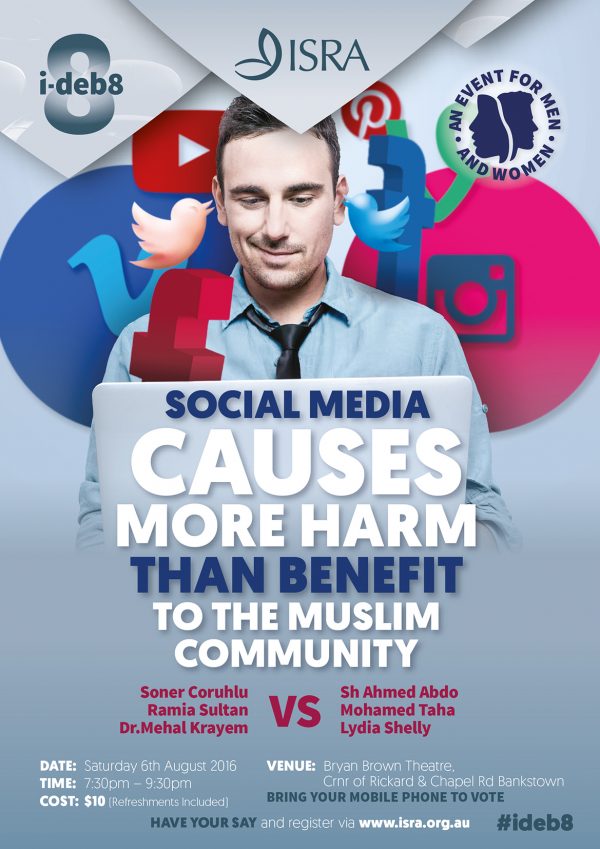 With this in mind, does social media bring about “more” harm to the community? Join us in this educational debate where some of the well-known members of the Muslim community take to the podium to debate this topic.

We have on the affirmative side is Dr. Mehal Krayem, Soner Corohlu, and Ramia Sultan. On the negative side we have is Sh. Ahmed Abdo, Mohamed Taha, and Lydia Shelly. Each one of these speakers will bring their own unique perspectives on social media as they are involved in different areas of society and they will help you decide whether social media causes more harm or benefit.

Dr. Mehal is adamant that social media is much more harmful and says, “The events of the last few weeks prove that.” Shaykh Ahmed Abdo nevertheless wants to adapt to the reality of today’s world and says, “Social media is here to stay”.

This is the latest discussion topic for ISRA’s i-deb8 series and promises to be one of the best yet. Each new debate brings to the fore an important issue facing the Australian Muslim community.

This eighth debate in the series brings together an excellent line up of speakers and promises to sharpen the mind and deepen thought. Critical thinking is advised and a great night out is guaranteed.

See the trailer here and register your interest here fast!

Make sure to bring your mobile phones as the audience will get to vote at the end based on the arguments presented by the speakers!