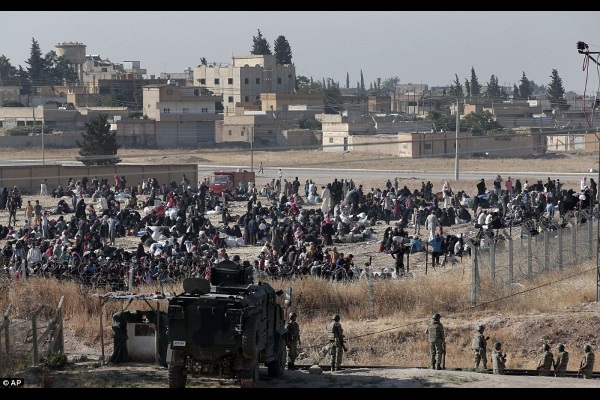 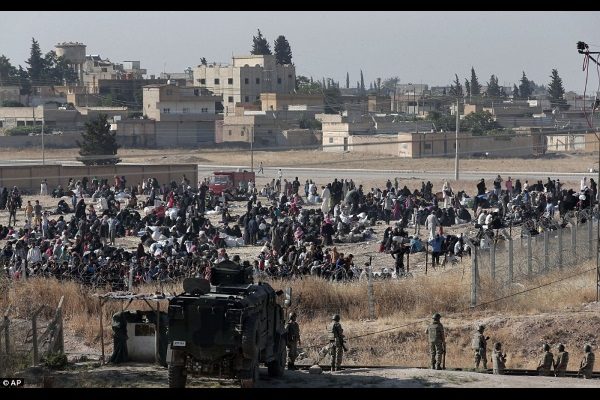 ISTANBUL – Concern mounted Monday for the fate of tens of thousands of displaced Syrian civilians caught in the middle of a desperate fight in the countryside north of Aleppo.

Days of clashes between moderate and Islamist rebel factions and the Islamic State group, which has mounted a fierce offensive on two key border towns, imperils rebel resupplies from Turkey.

The battles have drawn in Turkish and U.S.-coalition warplanes and Kurdish militiamen from the People’s Protection Units (YPG) in a multisided fight in an area measuring only 25 by 55 kilometers.

Kurdish spokesmen say they have opened closed roads to allow about 6,000 fleeing civilians into their border canton of Afrin.

Turkish officials aslo said their warplanes and artillery have struck multiple IS targets in the past three days, including four Katyusha rocket firing positions and two ammunition depots after the jihadists on May 27-28 lobbed rockets over the border hitting a district in southern Gaziantep province and the town of Kilis.

U.S.-led anti-IS coalition warplanes carried out at least three airstrikes this weekend on IS positions, U.S. officials said, more in support of the Turks than of embattled Free Syrian Army and Islamist rebels, who have complained they’re not receiving the close air support from the coalition that YPG fighters get in neighboring Raqqa province.

“If we had the support the YPG gets, we would not be in such a desperate position,” said Zakaria Malahefji of the 3,000-strong Fastaqim Kama Umirt, a brigade aligned to the rebel alliance Jaish al-Mujahideen (Army of Holy Warriors).

Earlier this month under pressure from Moscow, the International Syria Support Group, the 20-power group that includes the U.S. and Russia, warned armed groups that they could be excluded from the cessation of hostilities agreement, which is only partially functioning, if they work with al Nusra or other factions deemed terrorists.

Confusion on the ground

Last week in Washington, U.S. State Department spokesman Mark Toner told reporters that in and around Aleppo, “there is a certain amount of overlap, commingling, whatever the heck you want to call it, among these groups; and it’s incumbent on them and absolutely vital that they separate themselves so that we can clearly delineate where Nusra is and where the credible opposition is.”

With IS on the offensive in the northern Aleppo countryside that challenge will become greater.

Rebel commanders say they have no choice but to work with al-Nusra on occasion when they are being hard-pressed by IS or the Assad regime, which they argue is doing all it can to push factions opposed to President Bashar al-Assad into the arms of al-Nusra in order to paint them as terrorist in nature.

Activists say that since March al-Nusra has been gaining on average 200 to 300 new recruits a month.

Over the weekend the al-Qaida affiliate said it was mobilizing to support rebel factions battling to retain control of the strategically-vital border towns of Azaz and Marea, the onetime HQ of the FSA in Aleppo province.

Kurdish propagandists claim Nusra fighters are already engaged in the battle but this is denied by FSA commanders.

The battles for the towns of Azaz and Marea have flared and ebbed since February, but the IS push this time has been more determined — possibly to compensate for the recent loss of territory in Raqqa province.

Marea and Azaz fell to opposition forces in 2012 and are vital stops along a rebel supply route from Turkey to districts the rebels hold in Aleppo, which the government has been trying to encircle for months.

The pro-opposition monitoring group, the Britain-based Syrian Observatory for Human Rights, which relies on a network of activists on the ground for its information, said the fighting in the area is the heaviest in months and that the offensive amounts to the most significant advance near the Turkish border for IS in two years.

The medical charity Médecins Sans Frontières (MSF), or Doctors Without Borders, evacuated most of its staff and patients from al-Salamah hospital near Azaz on Friday.

“We are terribly concerned about the fate of our hospital and our patients, and about the estimated 100,000 people trapped between the Turkish border and active front lines,” Pablo Marco, MSF operations manager for the Middle East, said in a statement.

Marco added: “There is nowhere for people to flee to as the fighting gets closer.”

Most of displaced Syrians in or near the current fighting fled into the area from a blistering Russian-backed Assad regime offensive in February.

Turkish officials refused to allow displaced civilians to cross into Turkey. European appeals for the border to be re-opened fell on deaf ears.

“Officially we are still pressing the Turks to allow them in,” says a European diplomat, who asked not to be identified. “Unofficially we aren’t anymore,” he lamented.