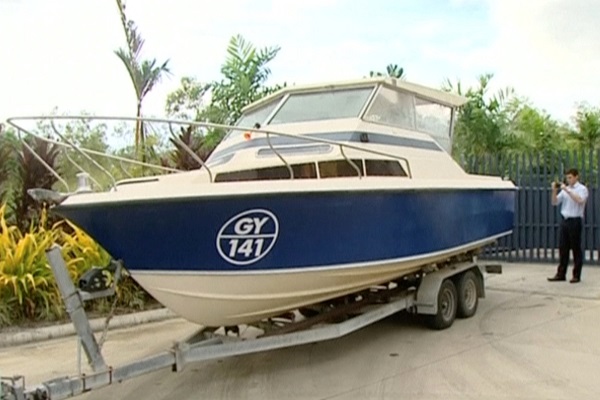 An officer takes pictures of a boat, which Australian police have seized in Cairns, Queensland, Australia in this still image taken from video, May 11, 2016. Australian Broadcasting Corporation/Handout via REUTERS TV

SYDNEY (Reuters) – Australian police have detained five men suspected of planning to sail a small boat from the far north to Indonesia and the Philippines en route to joining Islamic State in Syria, officials said on Wednesday.

The men were held on Tuesday after towing the seven-meter boat almost 3,000 km (1,865 miles) from Melbourne to Cairns in Queensland state, police said.

Australia has come under criticism for its tough immigration policies aimed at stopping asylum seekers taking boats from Indonesia to Australia, but few are believed to have attempted the journey in the opposite direction.

“We’re investigating the allegation they were planning to make their way through Indonesia to the Philippines, with a view to ending up in Syria,” Victoria state Deputy Police Commissioner Shane Patton told reporters in Melbourne.

“It’s not a common occurrence, I would suggest, people trying to get to Syria via boat, but I don’t have the exact figures for sure.”

The five had not yet been charged. Under tough new security powers passed in 2014, Australian face up to a decade in prison for overseas travel to areas declared off limits, which includes the province of Raqqa in Syria, a key strategic hub for Islamic State militants.

Australia, a staunch U.S. ally, has been on heightened alert for attacks by home-grown radicals since 2014 and authorities say they have thwarted a number of potential attacks, while there have been several “lone wolf” assaults, including a cafe siege in Sydney that left two hostages and the gunman dead.

Police said it was unclear where the men, aged between 21 and 33, had planned to put the boat in the water. Indonesia and Australia share a maritime border, but it spans several hundred kilometers of open sea at its narrowest point.

The Australian Broadcasting Corp said that Melbourne-born radical preacher Musa Cerantonio, a vocal supporter of the Islamic State who was deported from the Philippines to Australia in 2014, was among those detained.

Cerantonio, who converted to Islam from Catholicism at 17, was believed to be planning to join Islamic State when he was deported for having “invalid travel documentation”. He was placed under surveillance but not arrested upon his return.