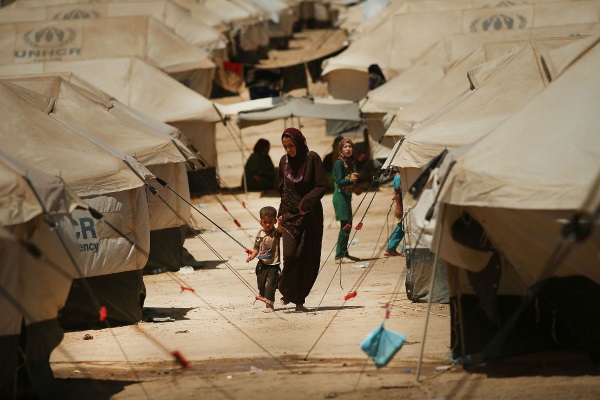 WASHINGTON – A new report says the number of people throughout the world who were uprooted from their homes due to conflicts and natural disasters stood at a record 40.8 million last year, the highest figure ever recorded.

The report found an average of 66,000 people were uprooted daily in 2015, enough last year to equal the combined populations of New York City, London, Paris and Cairo.

“The world is in a tremendous displacement crisis that is relentlessly building year after year, and now too many places have the perfect storm of conflict and/or disasters,” said Jan Egeland, secretary general of the council.

Sixty percent of the 8.6 million people displaced by conflict were in the middle eastern countries Yemen, Syria and Iraq. The Arab Spring uprising in 2010 and the growth of Islamic State, which is waging war in Syria, Iraq and in other countries, were the primary reasons for the displacements.

The report said the number of people displaced by conflict who remained in their native countries was double the number who sought refuge in other countries.

“They are not crossing borders, mostly because they can’t. They don’t have the means or the borders are closed,” Schembri said.

There is no military or humanitarian solution to the displacement crisis in the Middle East, said Schembri.

“It is only a politically negotiated solution that leads to long-term peace. All warring sides have to be involved,” he said. “And countries that have influence, rather than fueling the flames as they’ve been doing, should actually get their act together and stop the people with the guns on the ground.” 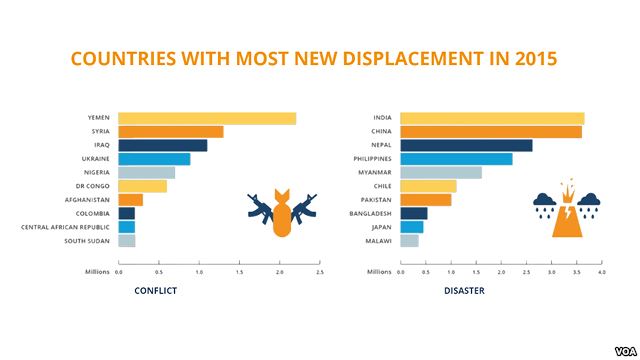 Yemen alone accounted for one-fourth of all conflict-related displacement last year. Schembri said while many of the 2.2 million displaced Yemeni people have sought refuge in displacement camps, safety is not assured. “They have been attacked directly by direct hits on a displacement camp. So there is nowhere safe when there is a war,” he said.

Yemen, an impoverished Arabian Peninsula country, is in the midst of a war between Yemen’s Shi’ite rebels and their allies and forces loyal to the Yemeni government. Saudi-led air strikes on behalf of the Yemeni government and an economic blockade imposed on civilians have contributed to the displacement.

Aside from the Middle East, the report said internally displaced people were most prevalent in Afghanistan, the Central African Republic, the Democratic Republic of Congo, Nigeria, South Sudan, Ukraine and Colombia. 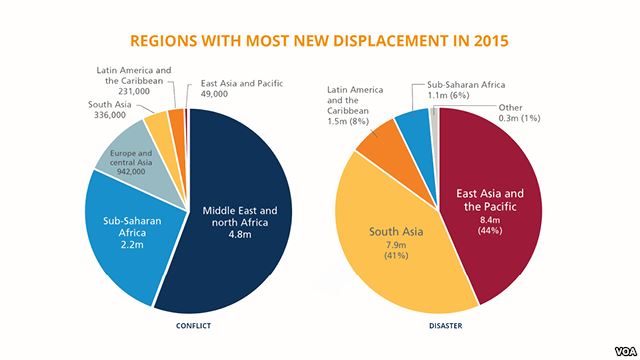 More than 19 million people were uprooted by natural disasters in 113 countries, mostly in India, China and Nepal. Extreme weather such as storms and floods were the main culprits. In Nepal alone, 2.6 people were uprooted by earthquakes in April and May of last year. Over the past eight years, disasters forced 203.4 million people to leave their homes.

While many countries such as Bangladesh, Cuba and Vietnam have improved their natural disaster prevention and preparation capabilities, the report said other countries have work to do.

“In Asia I would say, and to some extent Latin America, still too little is done to meet the growing strength of the forces of nature fueled by climate change,” said Egeland.

“We have to find ways to protect people from these horrendous forces of both nature and man-made ones,” he said.

The summit will be held on May 23 and 24, and include about 5,000 participants including government leaders, business executives, and aid organizations.

Five of the 10 countries with the highest number of people displaced by conflict have been on the list every year since 2003. They are Colombia, Democratic Republic of Congo, Iraq, South Sudan and Sudan.

“This is further evidence that in the absence of the help IDPs (internally displaced people) need, displacement tends to drag on for years and even decades,” according to IDMC acting director Alexandra Bilak.

The report, for the first time, tallied the number of people displaced by drug- and gang-related violence. An estimated one million people were forced to leave their homes as a result of this type of violence last year in El Salvador, Guatemala, Honduras and Mexico.

For the first time, the IDMC report synthesized all of its reports on global internal displacement into a single report. Figures will be continually updated online.

“By reporting on all situations of internal displacement, regardless of their cause, our intention is to provide an even more holistic picture of what has truly become a global crisis,” said Bilak.