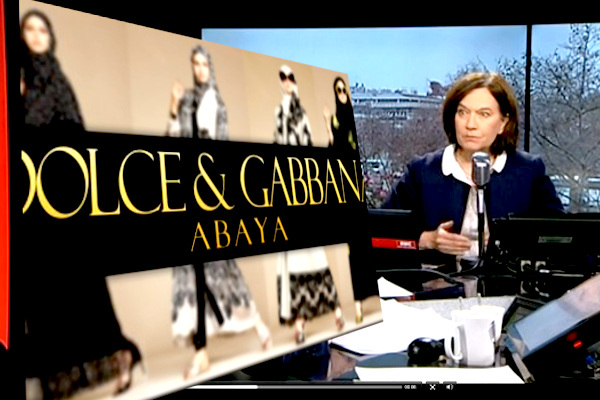 The kerfuffle in France over Western fashion designers producing Islamic clothing for women is one of the great non-issues of our time. But the kerfuffle itself is telling. It’s another sign of the stigma Islam carries today and the prejudice against it, couched, often, in the language of liberalism and, in France, laïcité.

A number of Western designers have started offering Islamic or “modest” fashions—loose, full-length-robes, or abayas, and long skirts—not just in Middle Eastern countries but in Western countries too. Laurence Rossignol, the French minister for women’s rights, recently decried this, saying in an interview on French TV, “What’s at stake is social control over women’s bodies. When brands invest in this Islamic market, they are shirking their responsibilities and are promoting women’s bodies being locked up.”

The partner of the late designer Yves Saint Laurent and co-founder of his fashion house Pierre Bergé jumped into the fray. “Creators should have nothing to do with Islamic fashion,” Bergé said. “Designers are there to make women more beautiful, to give them their freedom, not to collaborate with this dictatorship which imposes this abominable thing by which we hide women and make them live a hidden life.” He suggested that Western designers of Islamic clothing should have more principles than to cash in on misogyny.

“Bare is beautiful” seems to be the message. But of course, this message is not always correct. If bareness is not just about beauty, is it always about freedom? Are women who bare their bodies freer than women who cover them? That surely depends on the woman, her attitude, psychology and circumstances. Misogyny takes many forms, and is everywhere at home.

It was the French diplomat Talleyrand who said “Speech has been given man to conceal his thoughts.” The relationship between clothing and the body can be just as paradoxical. Less is sometimes more, and sometimes way too little. But certainly what women choose to wear or not to wear should be left to them—not to their fathers, brothers, husbands and not to the French state either. France’s obsession with the veil, banning it in schools and other public places, is a strike at Muslims, conveniently channeled through its tradition of fierce laicism.

To Americans, the fixation seems peculiar. Yet clothing, hair and fashion often generate intense acrimony. Some of the debate in decades past (and perhaps present too) over Catholic sisters’ habits seemed a war of words over symbols interpreted in different ways. While some Catholic sisters ceased wearing a habit because they felt it constrained their freedom, other younger sisters have since adopted it as a proud sign of their identity. The Islamic revival that has been going on for almost 50 years has now led many Muslim women to put on the veil that their mothers took off. Though the Koran says little about how women are to dress—contrary to popular belief, there is no requirement in Islam that women cover their head—the head scarf and, for some, the abaya have become emblems, sometimes of faith, sometimes of a politicized identity.

Rossignol’s comparison of women wearing Islamic dress with pre-Emancipation American blacks who favored slavery has ignited a firestorm of criticism, less because of her comments about Muslim women than because the word for black she used, negre, was perceived as racist. Both her and Bergé’s remarks seem militantly ethnocentric, as does a call for a ban on brands selling Islamic fashion by French feminist, philosopher and businesswoman Élisabeth Badinter. For them, it appears, fashion has to be Western fashion that appeals to Western tastes and Western ideas, or it’s enslavement to a primitive belief system. The parochialism of the point of view is striking. And what’s ignored are all the ambiguities in our own culture related to the objectification of women. By condemning a religion they don’t believe in or know much about, Rossignol, Badinter and Bergé become the voices of ignorant reaction, exemplars of the intolerance they decry in Muslims.

The designer Karl Lagerfeld once said, “I want everyone to wear what they want and mix it in their own way. That, to me, is what is modern.” Rushing to the ramparts to attack the abaya seems to miss his point.