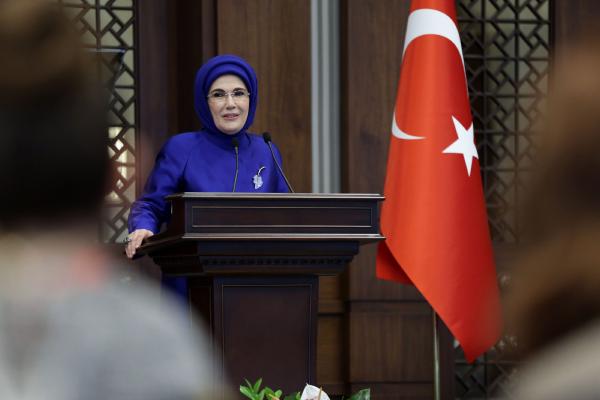 Editor’s Note: It is disappointing to note the number of Turkish nationals, and Muslims more generally, who insist on embracing and propagating a widely discredited and insulting orientalist fetish about the hareem or harem, which used to be characteristic of many Islamic societies in the past. Contrary to the depraved imaginings of many a hapless western observer the hareem was simply the quarters for women of a household or family where they could interact in privacy without the need for being in hijab. Please see this paper for details.

As a historian, I don’t find Emine Erdogan’s “harem” remarks offensive so much as goofy…and a distraction from more serious issues.

The wife of Turkish President Recep Tayyip Erdogan has praised the often-criticized harem of the Ottoman Empire as “a school for preparing women for life.” It comes a day after her husband said women are mothers above all other things, sparking protests.

“The harem was a school for members of the Ottoman dynasty and an educational establishment for preparing women for life,” Emine Erdogan said at an official event on the Ottoman sultans in Ankara, according to Turkish TV stations.

While harems did, in fact, provide women with an education in disciplines such as calligraphy, decorative arts, and music, they have often been criticized due to their treatment of women, many of whom were kept as slaves.

Seen as the ultimate symbol of a sultan’s power, harems typically consisted of the sultan’s multiple wives, servants and female relatives.

However, after the collapse of the Ottoman Empire, Turkey was built on secular principles by Mustafa Kemal, better known as Atatürk, with Islam taking a backseat in Turkish society. Still, President Erdogan and his wife routinely speak of their attachment to Islamic principles and the values of the old Ottoman Empire.

The first lady’s statement, which attracted criticism on social media, was the second controversial remark to come from the Erdogans in recent days.

In a Tuesday speech marking International Women’s Day, the president said that “a woman is above all a mother” – a statement that prompted thousands of people to take to the streets of Turkey in protest.

Critics have accused Erdogan’s government of trying to impose strict Islamic values on Turkey, and curtailing the civil rights of women. The president has urged Turkish women to have at least three children and branded efforts to promote birth control “treason.”