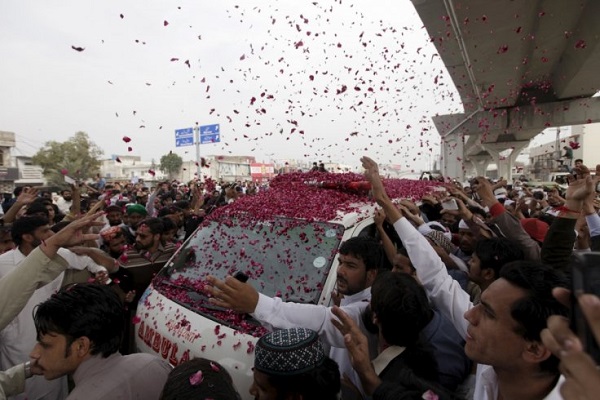 Pakistan has hanged the assassin of a governor who sought to reform the country’s controversial blasphemy laws, officials and supporters said

Mumtaz Qadri – feted as a hero by many supporters – was executed at a prison in Rawalpindi.

Qadri, a bodyguard of Salman Taseer, the governor of Punjab province, shot him dead in the capital, Islamabad, in 2011.

Dozens of rangers and police in riot gear as well as ambulances were stationed outside Qadri’s home in the city early on Monday.

Qadri was convicted and sentenced in late 2011. But he is viewed as a hero by many people who thought Taseer was a blasphemer.

Blasphemy is a highly controversial issue in Pakistan, and angry mobs have killed many people accused of insulting Islam in the Muslim-majority country. The law does not define blasphemy but stipulates that the penalty is death.

Since 1990, dozens of people have been extrajudicially killed as a result of blasphemy cases.

The main road between Rawalpindi and the capital Islamabad was blocked by protesters within hours of the hanging.

“At this time, the sentiments of all Muslims have been injured, and our feelings have been badly hurt. For any Muslim believer – no matter what school of thought he belongs to – Ghazi Mumtaz Qadri is a hero of Islam,” said Tahir Iqbal Chistie, president of Sunni Tehreek, Rawalpindi Chapter, during the protest.

“He sent to hell a person who showed disrespect for the holy Prophet. What he did was according to the orders of the Quran and the collected reports of what the Prophet Muhammad said and did during his lifetime,” he added.

Police later dispersed the demonstrators and closed off the road to prevent more protests.

MWC News’ correspondent Seyd Shah said that “the prison authorities arranged meeting of Mumtaz Qadri with his family and later dead body was handed over to his family members.”

Some lawyers showered Qadri with rose petals when he first arrived in court days after the killing. The judge who first convicted him was forced to flee the country after death threats.