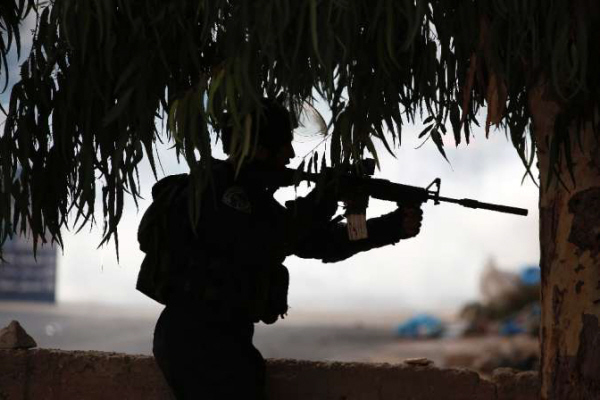 An Israeli soldier has been sentenced by a military court for torturing Palestinian prisoners with electric shocks. His actions were filmed on a cell phone. The Israeli Defense Force condemned the torture saying they’re in violation of the IDF’s code of conduct.

RT: Please give us your comment on this situation as a prominent defender of human rights.

Mustafa Barghouti: Unfortunately, during the last five months we’ve witnessed several crimes committed by the Israeli army, including the torture that has happened to this guy. This is not the first time torture has been practiced against Palestinian people. More than that, so many people have been killed in cold blood; they were assassinated in extrajudicial killings. Most of the 180 Palestinians who have been killed during the last five months have been killed in a format of extrajudicial killing and there is no justification for that.

The whole world watched two days ago how a young girl, no more than 15 years old, was shot and killed and was left on the ground bleeding to death, and when some people tried to approach her, they were attacked by the Israeli army – including a handicapped man who was thrown from his wheelchair. This is unacceptable behavior and torture is only one reflection of this racist and inhuman behavior of the Israeli army.

RT: Isn’t this extremely cynical to commit such a crime and film it? Of course, we have evidence thanks to that, but why was this done in the first place?

MB: Absolutely. And this is not the only case. There are video tapes on YouTube.com that show how Israeli illegal settlers and Israeli soldiers were celebrating the death of a Palestinian who was on the ground killed by the Israeli army. There are several incidents when soldiers – male and female, by the way – were taking photos of Palestinians victims, celebrating their death or celebrating their torture. I think in a way they are repeating what some American soldiers did in Iraq at one point in time.

RT: Clearly Israel is not willing to punish the culprits. What should be done by the international community?

MB: Behavior of the Israeli army, including the killing of Palestinians which has happened on a massive scale in Gaza and now is happening in a horrifying manner in the West Bank, should be judged in the International Criminal Court. And the ICC should take measures to initiate investigations of these crimes and no more hesitation should continue to happen. But on the other hand I believe that 50 years of occupation – which is going to be the case in Palestine next year – is much longer than any people can tolerate. Fifty years of occupation, an occupation that has transformed into a system of apartheid and discrimination. It will not end by the decision of the Israeli government because the Israeli government doesn’t want peace. The only way to stop that is for the international community to support the Palestinian people and respect international law by imposing sanctions and boycott on Israeli government for its behavior.

RT: Still Israelis are often saying that their army was defending itself against violent Palestinians. Who is the provoker in this situation?

MB: Israel has one of the most powerful armies in the world. Israel has 400 nuclear warheads. Palestinians don’t even have an army. And Palestinians are under occupation. When you hear the Israeli propaganda you would think that Palestinians are occupying Israelis. The truth is that Israelis are oppressing us and occupying us for almost 50 years. It is the Israelis who displaced most of the Palestinian people from their land. But Israel wants to be the aggressor and at the same time enjoy the status of a victim. In reality, the attacks on the Palestinians are not provoked by Palestinians; occupation itself is the greatest provocation. And international law says when people are occupied they have the right to resist occupation. What Palestinians do is to show some resistance and most of that is non-violent, peaceful resistance. Yet, we are encountered whenever we demonstrate peacefully with severe violence from the Israeli army… The way to peace for both Palestinians and Israelis is very simple: End the occupation and allow Palestinians to have their own independent state; allow us to have freedom, which all people in the world have a right to.