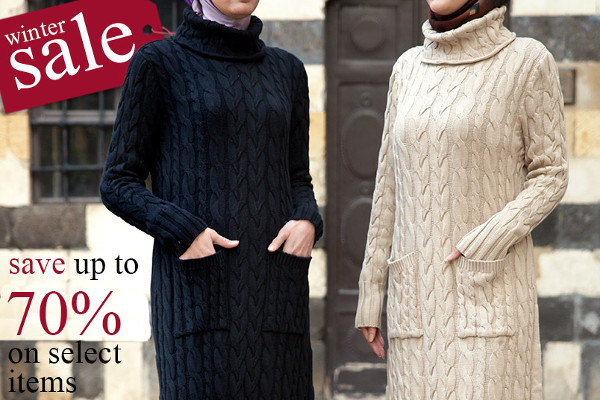 Anas Silwood moved to Jordan from Britain to study Arabic back in 2000. The 20-something was supposed to stay for only a few months, but he soon decided Amman was the place he wanted to be. He learned Arabic, converted to Islam and settled.

“Every time I went back to the UK I had the same problem,” he says. “People looked at me in a funny way because of what I was wearing. It happened over and over again, and that’s how I realized there must be a lot of Muslims in need of better-designed and better-made clothing.”

Silwood’s intuition quickly developed into a business. In 2002 he launched Shukr, one of the first Islamic fashion e-commerce sites catering to the needs of Muslims in Europe who wanted traditional Islamic clothing with attention to style.

It was a success. Sales volumes rose and the company expanded to the United States and the Middle East and North Africa region.

Back then Anas was a pioneer in a nearly untapped market.

The business of Muslim fashion

“Overall clothing purchase by Muslim consumers does not directly translate into Islamic fashion,” Rafi-Uddin Shikoh, the person behind the study, explains. “But there are a number of drivers that suggest the modest fashion industry will be growing towards those numbers.”

First of all, there is the “importance of religion” in people’s life. Compared with Europe, where only one in three respondents deem religion important, or the US where that percentage hovers at around 50 percent, in majority Muslim countries 88 percent of the population define religion as important.

Secondly, there are the demographics. The average age in Muslim majority countries is about 30, in Europe and the US it is about 44.

This is very important as the purchasing power of young consumers tends to grow over the years.

The third important driver is an economic one. The gross domestic product of countries with a majority Muslim population is projected to grow at an average of 5.4 percent a year compared with the 3.4 percent of Europe and the US over the next few years.

Last but not least, 29 percent of the global population is projected to be Muslim by 2030.

These are numbers that seemingly cannot be ignored, and, unsurprisingly perhaps, the number of fashionistas, entrepreneurs and designers rushing to seize the opportunity this presents is growing by the day.

Among these is Modanisa, a Turkish-based e-commerce platform that is one of the largest players in today’s market.

Founded in 2012 by Kerim Ture, Modanisa sells Islamic clothing to about 60 countries. More than 200 Islamic fashion brands offer their goods on the platform. Consumers find what they want, order it, and it is delivered to their home.

“I remember when I realised there was this incredible need,” Ture says. “I went to a restaurant for a dinner and sitting next to me there was a 20-something girl and her mother dressed in the exact same way. There was no way they did not want different things to reflect their style.”

Since then, his business has received $5m in backing from STC ventures, a Saudi venture capital group, and has acted as a catalyst for other Islamic fashion entrepreneurs and designers eager to tap the market and make a name for themselves.

Rabia Z, a UAE-based fashion designer and a veteran in the field, is probably the most well-known in the region. “I started creating modest fashion back in 2001,” she says.

“I was living in the US back then. It was right after 9/11 when a lot of my friends were taking off their hijabs because of the historical moment. I didn’t want to, and because I come from a background in fashion I decided to style my own hijabs and clothing. People liked it, so I decided to put my creation online.

“Client requests haven’t stopped since then. And I have to admit, I could not believe there was nobody creating clothing for millions of Muslim women.”

Neslihan Cevik, the author of a book on the transformation of the role of women in Islam and founder of M-Line Fashion, is keen to underline how Muslim women are typically presented as repressed monotone figures who are unable to make their own choices, but how, from a market-demand point of view, nothing could be further from the truth.

“Within certain standards of modesty, Muslim women have hundreds of different needs,” she says. “Also, it’s important to point out how these have increased in the last years and are, in part, a response of women across the Muslim world engaging more in public activities, having jobs, living outside of the house.”

Catering to specific needs and individual desires is what made Dilyara Sadrieva, a Russian Muslim, the successful entrepreneur and designer behind Bella Kareema fashion.

“I started making Islamic clothes as a hobby, because I wanted them for myself,” she says. “Most of the halal clothes sold in Russia come from Turkey or the Middle East, but they are not suited for our climate or taste so I decided to do something about it.”

Two years later, Bella Kareema was selling hundreds of items per year and taking part in fashion shows in London, the UAE and Turkey. “My secret, I think, is elegance, combining culture and tradition with the need for a personal touch. And I know I am good at it: half of my customers are non-Muslim women that like the style and are looking for a sober dress.”

Local entrepreneurs and designers are not the only ones to have jumped on the modest fashion bandwagon. Large international brands such as DKNY, H&M and Uniqlo have all created collections to cater to the Muslim market. More recently D&G unveiled its abaya and hijab collection, causing a stir in the luxury fashion world and setting a precedent other design houses are likely to follow.

Italian entrepreneur Paolo Costanzo, the founder of Infinita group, and the regional representative of the Islamic Fashion and Design Council, is about to launch a luxury fashion website catering to high-end Muslim consumers.

“We have entered [into] agreements with a great number of small Italian producers [who are] able to deliver top quality products,” Costanzo says. “We have also teamed up with local designers and bloggers to really understand the market. For the longest time Muslim consumers have been treated as passive, as unable to choose, but they are more active then ever and we need to be careful to their specific needs if we don’t want to be left out.”

Rabia Z agrees. “I am happy foreign fashion brands are entering the modest fashion industry,” she says. “It means more choice for the consumer. But I also would like large brands to not see this market as a mere money making opportunity. I put my soul in my work, it’s a way to empower Muslim women and give them choice, help them express themselves and it should remain this way.”