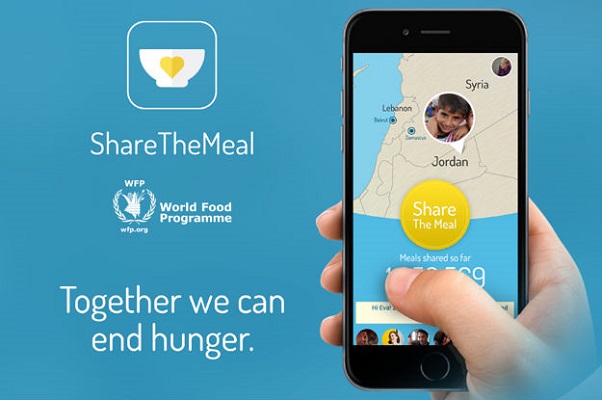 It costs just $0.50, and all it takes is a simple tap on your smartphone, yet it can have a profound impact on the lives of vulnerable Syrians facing severe hunger and malnutrition.

Just two months after hitting its target of helping feed 20,000 Syrian refugee children for a year, the World Food Programme (WFP) has launched a new mobile funding initiative aiming to help nourish women and newborns in the war-torn city of Homs. 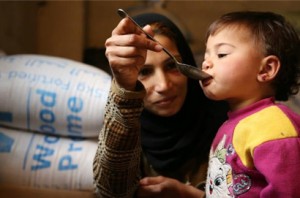 The goal is for users of the ShareTheMeal smartphone app to help provide 2,000 pregnant women and nursing mothers, and their children up to six-months-old, with a year’s worth of vital nutrition.

WFP spokesperson Abeer Etefa said the women in the Aoun distribution centre will receive vouchers to buy fresh fruit, vegetables, dairy and meat, which will allow them to improve their dietary diversity.

“This is particularly important for both mother and child during pregnancy and the first few months after giving birth. The balanced nutrition has a crucial influence on the growth and development of their children,” she said.

Homs, previously the epicentre of the uprising against President Bashar al-Assad, has been under a ceasefire since December 2015.

Yet, the five-year conflict has left the city in central Syria largely destroyed, with many of its citizens displaced and in dire need of support.

“The city is devastated,” Sebastian Stricker, head of the ShareTheMeal project, said. “There are food shortages; a lot of people are displaced and are suffering from severe poverty,” he added.

Having a daily meal, Stricker said, does not only help the women and young children avoid irreversible lifelong consequences, but also provides them with a semblance of normality amid the prolonged crisis.

The free-to-download app, which allows contributors to follow the impact of their donations, is available globally for iOS and Android users. Developers said that a donation of $0.50 can provide women with enough nutrition for a day.

The concept is to allow people around the world to digitally “share” their meals while having dinner or lunch in a fast and easy way.

WFP’s latest campaign comes two months after it first rolled out ShareTheMeal in mid-November in a bid to help nourish Syrian refugee children who had been forced to flee their homes.

Since then, some 400,000 people from 197 countries and territories have used the app, helping the group to raise about $2m – enough to provide school snacks to 20,000 children in refugee camps in Jordan for a full year.

“Some of these children hadn’t eaten in weeks,” said Stricker. “Now they are being fed every day.”

The WFP says it must raise $25m each week to meet the basic food needs of people affected by the complex and worsening crisis in Syria, which has killed more than 250,000 people and displaced millions.

The UN, which has called the use of starvation as a weapon a “war crime”, is struggling to deliver aid to about 4.5 million Syrians who live in hard-to-reach areas, including nearly 400,000 people in besieged areas.

On Thursday, an international convoy carrying food and other necessities entered the famine-struck town Madaya for the second time this week, following devastating reports of starvation and illness.

“We would go for three days without food, then we would go and gather grass to just boil and eat it,” Mubarak Aloush, a Madaya resident who managed to escape to Lebanon said.

On Monday, a first convoy reached Madaya and truckloads of aid also entered two other towns blockaded by rebel groups.

A new round of Syrian peace talks is scheduled for later this month, and access to humanitarian aid is seen as a key confidence-building measure.

James Denselow, a writer on Middle East politics and security issues and a research associate at the Foreign Policy Centre, said the discussions must place humanitarian relief for besieged or hard-to-reach areas at the top of their agenda.

“The slow death of those starving in areas across the country is a matter of huge urgency and a test for all parties to display their commitment to a peaceful end to the conflict,” he said.

“If actors on the ground fail to find a consensus on allowing the access of aid to Syria’s beleaguered civilian population then the international community must take responsibility to put an end to such medieval practices being deployed in the modern age.

“The fate of Syrians themselves must be placed at the heart of any discussion on Syria.”