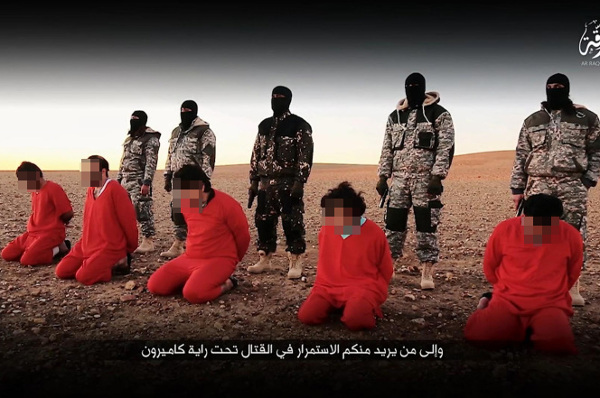 British Prime Minister David Cameron on Monday dismissed as “desperate stuff” an Islamic State video purporting to show the militants’ execution of five men it said were spying for Britain in Syria.

London said it is examining the content of the video in which an English-speaking gunman mocks Cameron for Britain’s air campaign in Syria against the insurgents and vows to invade Britain and impose Sharia law. The 10-minute clip revived memories of Mohammed Emwazi, the British Islamic State terrorist known as “Jihadi John” who appeared in other execution videos before he was killed by a U.S. drone strike last year.

The British leader called the new video “desperate stuff from an organization that really does do the most utterly despicable and ghastly acts, and people can see that again today. But this is an organization that’s losing territory, it’s losing ground; it’s, I think, increasingly losing anybody’s sympathy, and this again shows what an appalling organization we’re up against.”

The footage that circulated Sunday depicted the five men allegedly confessing to espionage, filming and photographing, in exchange for money, the location of militants in Raqqa, the northern Syrian capital of Islamic State’s self-declared caliphate. The men wore orange jumpsuits, kneeling before five masked fighters in military fatigues who brandished pistols.

One of the gunmen said the execution was “a message to David Cameron,” who has ramped up aerial attacks on Islamic State insurgents in Iraq and Syria.

“How strange it is that we find ourselves today hearing an insignificant leader like you challenge the might of the Islamic State,” the gunman said.

The purported spies were then shot in the head.