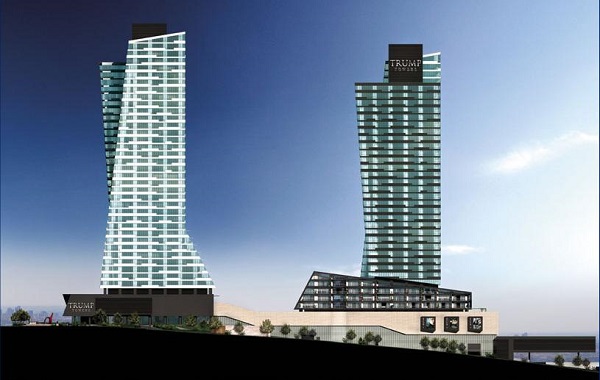 Trump’s name dots high-rises, golf courses and hotels from Istanbul to Dubai. But now in Turkey, an attempt is underway to change the name of Trump Towers Mall in Istanbul’s high-rise business district of Mecidiyekoy.

“We are currently assessing the legal aspects of our relationship with the brand name,” Bulent Kural, the general manager of the Trump Towers Istanbul, told VOA.

Trump Towers Istanbul is a $400 million joint U.S.-Turkish venture that includes two high-rise buildings with offices, residences and the mall. The 3.2 million-square-foot complex opened in 2012.

Kural said his company had already conveyed its disappointment to the Trump family about the billionaire candidate’s remarks.

“If they don’t allow Muslims into the United States, then why should his [Trump] name be here?” said one resident as he stood under Trump Tower in Baku, the capital of Azerbaijan.

In Azerbaijan, an oil-rich nation with a Muslim majority population, locals called on their government to take action with regard to the Republican front-runner’s business association in the country.

“To name a building after such a person is disrespectful to the Azerbaijani people and to the Islamic world at large. The government should remove his name from the building and confiscate it,” Vasif Mammadov, a Baku-based lawyer, told VOA.

As in Istanbul, the Trump Tower in Baku is not owned by Trump.

The property is owned by multibillionaire Anar Mammadov, 34, whose father is an influential minister in the Azerbaijani government. Mammadov did not respond to a VOA request for comment.

According to reports and Trump’s financial disclosure form, his company received $2.5 million in 2014 for lending the brand name and for property management of the luxury hotel in Baku. Amid the firestorm over Trump’s remarks, details of the project have been removed from the Trump company website.

In the United Arab Emirates, a real estate company has removed Trump’s name and his image used in marketing from a $6 billion golf complex in Dubai.

A Dubai firm, DAMAC Properties, Thursday removed Trump’s picture from a billboard near the project construction site, according to Reuters.

Also in Dubai, the Landmark Group said it would take Trump home decor products out of its 180 stores because it “values and respects the sentiments of its customers,” the Associated Press reported.

UAE billionaire businessman Khalaf al-Habtoor, who once had a deal with Trump to build a hotel and tower in Dubai that later fell through, expressed a sentiment that has been rippling through the Muslim world this week. He said he would not welcome Trump again.

“If he comes to my office, I will not let him in. I reject him,” al-Habtoor told the Associated Press.

Trump’s myriad dealings in the Muslim world are difficult to track. Knowledge about them is limited to what the company makes public on its website and in Trump’s financial disclosure to run for public office.

When asked how much Trump stands to lose in Muslim world business, Trump’s company did not respond to VOA queries.