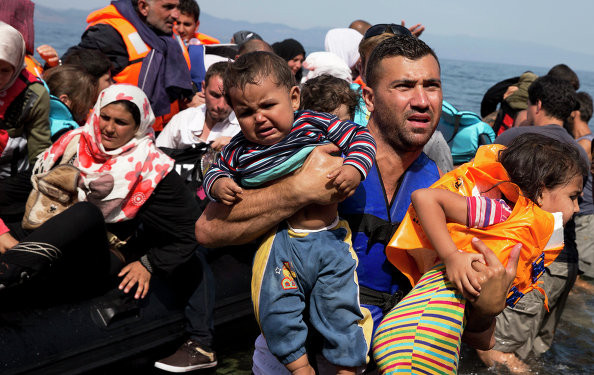 Several mosques have been vandalised and a number of suspected hate crimes targeting Muslims carried out after a number of United States governors announced they would not accept Syrian refugees in their states.

The Council on American Islamic Relations (CAIR), a civil rights organisation, said on Monday that it has documented recent “vandalism, threats and hate [incidents]” in Massachusetts, Florida, Texas, Kentucky, Virginia, Nebraska, Tennessee, Ohio and New York, among other states.

The wave of incidents follows declarations by at least 26 state governors – 25 from the right-wing Republican party and a Democrat – saying they will block Syrian refugees, citing last Friday’s deadly attacks in Paris, claimed by the Islamic State of Iraq and the Levant (ISIL) group.

In one incident, officials at the Islamic Centre in Omaha, Nebraska, said that an image of the Eiffel Tower was spray-painted on the wall of a local mosque overnight on Monday, CAIR said.

In Pflugerville, Texas, worshippers arrived at their local mosque on Monday morning to find faeces smeared on the door and a torn-up copy of the Quran on the doorstep.

The caller said that they have “a militia that is going to come down to your Islamic Society of Pinellas County and firebomb you and shoot whoever is there in the head”.

According to CAIR, another Florida mosque, the location of which has not been made public, received similar threats. A caller vowed to “bomb” the mosque and “shoot people at will”.

In Portland, Oregon,  protesters gathered outside a local and taunted worshippers as they arrived for prayer. They called members of the local Ahmadiyya Muslim community “cowards” and told them they are “going to hell”.

On Tuesday, an Uber driver in Charlotte, North Carolina, said he was punched and threatened with death by a passenger who mistook him as Muslim, according to local media.

And a Muslim family in Orlando, Florida, said their family home was shot at by an unknown assailant on Monday. Speaking to local media, the Elmasri family and their neighbours said they were targeted because of their faith.

Corey Saylor, spokesperson at CAIR, said on Tuesday that the governors’ refusal to accept Syrian refugees has encouraged Islamophobic sentiment.

“It gives people a license to put into action the uglier things they may be thinking” about Muslims, he said.

“After any incident like the Paris attack, we see a clear uptick in anti-Islam rhetoric.”

The Syrian uprising started in March 2011 and quickly devolved into a full-scale civil war. More than 250,000 people have been killed throughout the conflict, according to United Nations estimates.

More than 4.2 million Syrians have become refugees, while about 7.6 million are internally displaced within the country’s borders.

“Closing the doors on people fleeing war zones is not a message that America should send to the world,” Saylor said. “Rather than values, the [governors] are projecting fear.”

Some legislators called for US President Barack Obama’s administration to accept Christian refugees and reject Muslims.

Saylor says such calls are misinformed because ” ISIL’s number one victims are Muslims.”

While governors are not able to ban Syrian refugees from residing in their states, they can suspend cooperation between state programmes and the federal government.

“That can make it more difficult,” Angelita Baeyens, programmes director for the Robert F Kennedy Centre for Justice and Human Rights, said. “But it also sends a message of extreme intolerance and Islamophobia.”

New Jersey Governor Chris Christie said on Monday that the US should not allow any Syrian refugees, including orphaned children.

“I don’t think orphans under five are being, you know, should be admitted into the United States at this point,” Christie said.

Baeyens said that Christie’s comments and others like it “create a climate of fear and suspicion”.

“In the face of the worst refugee crisis in recent history, this rhetoric is really appalling,” she added. “It is collective hysteria.”

Presidential candidates have also chimed in. Writing on Twitter, Republican Donald Trump claimed that “some” Syrian refugees may be ISIL members.

Mike Huckabee, presidential candidate and former Arkansas governor, made similar anti-refugee comments during an interview with Fox News on Monday.

“Can you imagine bringing in a bunch of Syrian refugees who’ve lived in the desert their whole lives that are suddenly thrown into an English speaking community?  Where it’s maybe in Minnesota where it is 20 degrees below zero?”

According to CAIR, Trump and Huckabee are among more than a dozen presidential hopefuls for the 2016 elections who have employed Islamophobic rhetoric during their campaigns.

While only 1,500 Syrians have been resettled in the US to date, the Obama administration announced earlier this year that 10,000 more will be accepted throughout a one-year span.

Speaking of the governors’ declarations, Human Rights Watch said Syrian refugees were being used as a “scapegoat”.

“Resettled refugees from Syria have fled persecution and violence, and undergone rigorous security screening by the US government,” Alison Parker, codirector of HRW’s US programme, said in a statement.

“The governors’ announcements amount to fear-mongering attempts to block Syrians from joining the generous religious groups and communities who step forward to welcome them.”