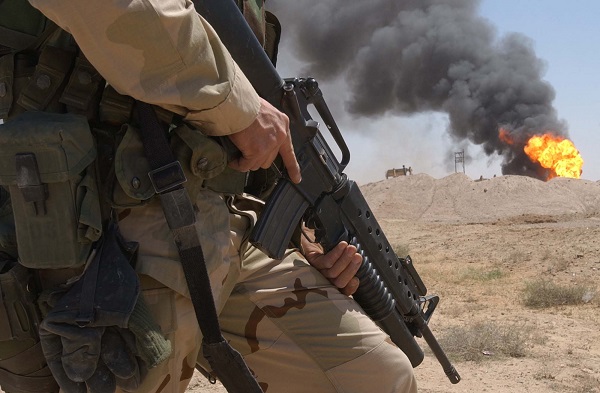 The papers, revealed here for the first time, raise new questions over Britain’s involvement in the war, which had divided Tony Blair’s cabinet and was voted through only after his claims that Saddam Hussein had weapons of mass destruction.

The minutes of a series of meetings between ministers and senior oil executives are at odds with the public denials of self-interest from oil companies and Western governments at the time.

The documents were not offered as evidence in the ongoing Chilcot Inquiry into the UK’s involvement in the Iraq war. In March 2003, just before Britain went to war, Shell denounced reports that it had held talks with Downing Street about Iraqi oil as “highly inaccurate”. BP denied that it had any “strategic interest” in Iraq, while Tony Blair described “the oil conspiracy theory” as “the most absurd”.

But documents from October and November the previous year paint a very different picture.

Five months before the March 2003 invasion, Baroness Symons, then the Trade Minister, told BP that the Government believed British energy firms should be given a share of Iraq’s enormous oil and gas reserves as a reward for Tony Blair’s military commitment to US plans for regime change.

The papers show that Lady Symons agreed to lobby the Bush administration on BP’s behalf because the oil giant feared it was being “locked out” of deals that Washington was quietly striking with US, French and Russian governments and their energy firms.

Minutes of a meeting with BP, Shell and BG (formerly British Gas) on 31 October 2002 read: “Baroness Symons agreed that it would be difficult to justify British companies losing out in Iraq in that way if the UK had itself been a conspicuous supporter of the US government throughout the crisis.”

The minister then promised to “report back to the companies before Christmas” on her lobbying efforts.

The Foreign Office invited BP in on 6 November 2002 to talk about opportunities in Iraq “post regime change”. Its minutes state: “Iraq is the big oil prospect. BP is desperate to get in there and anxious that political deals should not deny them the opportunity.”

After another meeting, this one in October 2002, the Foreign Office’s Middle East director at the time, Edward Chaplin, noted: “Shell and BP could not afford not to have a stake in [Iraq] for the sake of their long-term future… We were determined to get a fair slice of the action for UK companies in a post-Saddam Iraq.”

Whereas BP was insisting in public that it had “no strategic interest” in Iraq, in private it told the Foreign Office that Iraq was “more important than anything we’ve seen for a long time”.

BP was concerned that if Washington allowed TotalFinaElf’s existing contact with Saddam Hussein to stand after the invasion it would make the French conglomerate the world’s leading oil company. BP told the Government it was willing to take “big risks” to get a share of the Iraqi reserves, the second largest in the world.

Over 1,000 documents were obtained under Freedom of Information over five years by the oil campaigner Greg Muttitt. They reveal that at least five meetings were held between civil servants, ministers and BP and Shell in late 2002.

The 20-year contracts signed in the wake of the invasion were the largest in the history of the oil industry. They covered half of Iraq’s reserves – 60 billion barrels of oil, bought up by companies such as BP and CNPC (China National Petroleum Company), whose joint consortium alone stands to make £403m ($658m) profit per year from the Rumaila field in southern Iraq.

Last week, Iraq raised its oil output to the highest level for almost decade, 2.7 million barrels a day – seen as especially important at the moment given the regional volatility and loss of Libyan output. Many opponents of the war suspected that one of Washington’s main ambitions in invading Iraq was to secure a cheap and plentiful source of oil.

Mr Muttitt, whose book Fuel on Fire is published next week, said: “Before the war, the Government went to great lengths to insist it had no interest in Iraq’s oil. These documents provide the evidence that give the lie to those claims.

“We see that oil was in fact one of the Government’s most important strategic considerations, and it secretly colluded with oil companies to give them access to that huge prize.”

Lady Symons, 59, later took up an advisory post with a UK merchant bank that cashed in on post-war Iraq reconstruction contracts. Last month she severed links as an unpaid adviser to Libya’s National Economic Development Board after Colonel Gaddafi started firing on protesters. Last night, BP and Shell declined to comment.

Not about oil? what they said before the invasion

* Foreign Office memorandum, 13 November 2002, following meeting with BP: “Iraq is the big oil prospect. BP are desperate to get in there and anxious that political deals should not deny them the opportunity to compete. The long-term potential is enormous…”

* Tony Blair, 6 February 2003: “Let me just deal with the oil thing because… the oil conspiracy theory is honestly one of the most absurd when you analyse it. The fact is that, if the oil that Iraq has were our concern, I mean we could probably cut a deal with Saddam tomorrow in relation to the oil. It’s not the oil that is the issue, it is the weapons…”

* BP, 12 March 2003: “We have no strategic interest in Iraq. If whoever comes to power wants Western involvement post the war, if there is a war, all we have ever said is that it should be on a level playing field. We are certainly not pushing for involvement.”

* Lord Browne, the then-BP chief executive, 12 March 2003: “It is not in my or BP’s opinion, a war about oil. Iraq is an important producer, but it must decide what to do with its patrimony and oil.”

* Shell, 12 March 2003, said reports that it had discussed oil opportunities with Downing Street were ‘highly inaccurate’, adding: “We have neither sought nor attended meetings with officials in the UK Government on the subject of Iraq. The subject has only come up during conversations during normal meetings we attend from time to time with officials… We have never asked for ‘contracts’.”