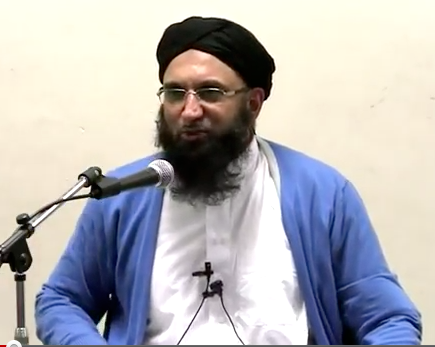 We are now in a small town in a narrow valley. There is no vegetation, no livestock, no gardens, no rivers. Desert after desert separates the town from the rest of the world. During the day the heat of the sun is unbearable and the nights are still and lonely. Tribes flock to it like animals in the open country flock to a water-hole. No government rules. There is no religion to guide people except one which promotes the worship of stone idols. There is no knowledge except priestcraft and a love for elegant poetry. This is Makkah and these are the Arabs.

In this town lies a young man who has not yet seen twenty summers. He is short and well-built and has a very heavy crop of hair. People compare him to a young lion. He comes from a rich and noble family. He is very attached to his parents and is particularly fond of his mother. He spends much of his time making and repairing bows and arrows and practising archery as if preparing himself for some great encounter. People recognize him as a serious and intelligent young man. He finds no satisfaction in the religion and way of life of his people, their corrupt beliefs and disagreeable practices. His name is Sad ibn Abi Waqqas.

‘Ya Ummah! In spite of my strong love for you, my love for Allah (swt) and His Messenger (saw) is indeed stronger. By Allah, if you had a thousand souls and one soul after another were to depart, I would not abandon this my religion for anything.’

“When she saw that I was determined, she relented unwillingly and ate and drank.”

It was concerning Sa’d’s relationship with his mother and her attempt to force him to recant his faith that these words of the Qur’an were revealed:

“And We enjoined on man (to be good) to his parents. In pain upon pain did his mother bear him and his weaning took two years. So show gratitude to Me and to your parents. To Me is the final destiny.

“But if they strive to make you join in worship with Me things of which you have no knowledge, obey them not. Yet bear them company in this life with justice and consideration and follow the way of those who turn to Me. In the end, the return of you all is to Me and I shall tell you (the truth and meaning of) all that you used to do.” (Surah Luqman, 31:14-15)

In these early days of Islam, the Muslims were careful not to arouse the sensibilities of the Quraysh. They would often go out together in groups to the glens outside Makkah where they could pray together without being seen. But one day a number of idolaters came upon them while they were praying and rudely interrupted them with indignities passively and they came to blows with the idolaters. Sa’d ibn Abi Waqqas (ra) struck one of the disbelievers with the jawbone of a camel and wounded him. This was the first bloodshed in the conflict between Islam and kufr – a conflict that was later to escalate and test the patience and courage of the Muslims.

After the incident, however, the Prophet (saw) enjoined his companions to be patient and forbearing for his was the command of Allah (swt):

“And bear with patience what they say and avoid them with noble dignity. And leave Me alone to deal with those who give the lie to the Truth, those who enjoy the blessings of life (without any thought of Allah) and bear with them for a little while.” (Surah al-Muzzammil, 71:10)

More than a decade later when permission was given for the Muslims to fight, Sa’d ibn Abi Waqqas (ra) was to play a distinguished role in many of the engagements that took place both during the time of the Prophet (saw) and after. He fought at Badr together with his young brother ‘Umayr (ra) who had cried to be allowed to accompany the Muslim army for he was only in his early teens. Sa’d (ra) returned to Madinah alone for ‘Umayr (ra) was one of the fourteen Muslim martyrs who fell in the battle.

“Irmi Sa’d… Fidaka Abi wa Ummi – Shoot, Sa’d… may my mother and father be your ransom.”

Of this occasion, ‘Ali ibn Abi Talib (ra) said that he had not yet heard the Prophet (saw) promising such a ransom to anyone except Sa’d. Sa’d (ra) is also known as the first companion to have shot an arrow in defense of Islam. And the Prophet (saw) once prayed for him:

Zahir Mahmood beautifully transforms the listener to the golden age of the Sahabaas and makes us experience what Islam meant for them .

This is one feel good lecture.