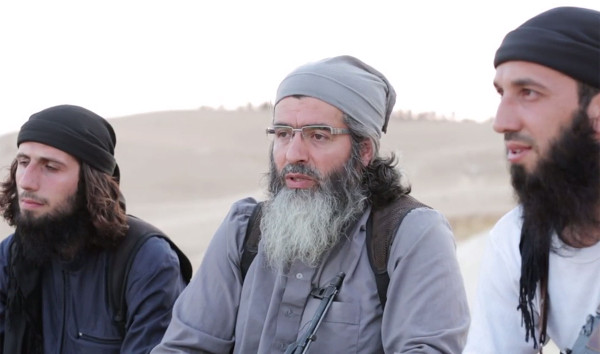 A Turkish militant from the Islamic State of Iraq and the Levant (ISIL) has called for the “conquest” of Istanbul, slamming President Recep Tayyip Erdoğan for helping Western “crusaders,” the “atheists” of the outlawed Kurdistan Workers’ Party (PKK), as well as the Free Syrian Army (FSA) “secularists.”

In the undated video shared on pro-ISIL social media accounts on Aug. 17, an unnamed militant is seen speaking fluent Turkish with sporadic recitation of Arabic prayers and Quranic verses.

While relating how Turks had accepted Islam centuries ago, he complains that “some of us started to worship tombs” as a photo showing Erdoğan visiting an Islamic shrine is displayed on screen.

“Then the secularist Kemal Atatürk came… He forced Turkish people to deny their religion, as well as [imposed] secularism,” the militant says.

The Arabic word “taghut,” which means to “cross the limits, overstep boundaries,” or “to rebel,” is frequently used in the ISIL video, including in descriptions of Erdoğan.

“Then the traitor Erdoğan came. He did not rule by the laws of God. He befriended Americans; Jews; crusaders; atheist PKK members; Atatürk’s secular friends, the FSA; and the apostate spies of the Saud family,” he states.

The statement slams Erdoğan for “opening Turkish lands to the PKK and FSA, and opening Turkish air bases to crusaders and their aircraft to protect the atheist PKK.”

After accusing Erdoğan of “becoming a servant primarily to protect his seat that he was about to lose,” the militant calls on the “people of Turkey to revolt.”

“Let’s hold the rope of the unshakable God and then, with the order of the believers’ amir, Abu Bakr al-Baghdadi – God protect him – who is descended from the Prophet’s line, let’s conquer Istanbul, which the traitor Erdoğan makes every effort to deliver to the crusaders,” he concludes.

A bomb that Turkish authorities blamed on ISIL killed 33 pro-Kurdish activists in southeastern Turkey on July 20.

Both security forces and PKK militants have been killed in clashes in Turkey in the past month, after Ankara launched large-scale strikes against the PKK and limited action against ISIL.

U.S. warplanes carried out their first air strikes on ISIL targets in Syria after taking off from the key İncirlik Air Base in southern Turkey on Aug. 12.

Joint anti-ISIL operations with the participation of Turkey is expected to increase in the coming days, as Ankara is waiting for requests by Washington to maintain full-fledged coordination with the expected aircraft.