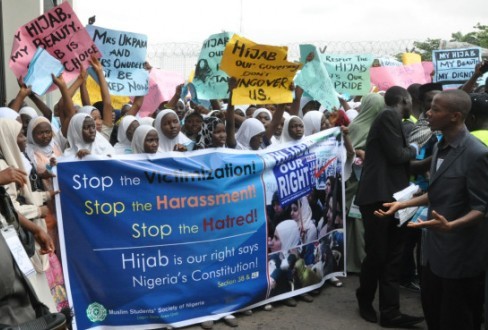 A leading Nigerian civil rights group has condemned calls to ban hijab in northern Nigeria, warning that any such ban would offer no solution to the problem of Boko Haram extremism.

The association implored the Nigerian government “to remain focused in its fight to end the insurgency and not be distracted by those calling for the ban on the use of hijab,” Hajia Amina B. Omoti, the National President of the Federation of Muslim Women’s Associations in Nigeria (FOMWAN), was quoted by Today.ng on Friday, August 7.

“It is diversionary and any attempt to implement it will be resisted by all well meaning Muslims in the country.”

The calls to ban the religious outfit have angered Nigerian Muslim leaders who rejected the call to stop and search Hijab women under any circumstances, urging for more respect for women.

Muslims all over Nigeria have frown on the latest security lapses in Nigeria and its neighboring countries, demanding more respect for the rights of Muslim who are sometimes stopped and searched indiscriminately.

They have also called on the President Muhammadu Buhari’s government to track down the Boko Haram insurgency which has been terrorizing the northern part of the country since 2009.

Omoti, who criticized the wrongful use of the Hijab by the insurgents to perpetrate terrorism, encouraged Muslim ummah to keep calm and continue to be orderly, peaceful citizens of the country.

“The attention of the Federation of Muslim Women’s Associations in Nigeria (FOMWAN) has been drawn to the ongoing debate and unsolicited advice to government in different print and electronic media on the need to ban the use of Hijab,” a statement from the FOMWAN reads.

“FOMWAN as a Muslim Women organization is concerned at the unfortunate use of young and innocent girls wearing Hijab to create havoc in the North Eastern part of Nigeria; this is sad and worrisome.”

Nigeria, one of the world’s most religiously committed nations, is divided between a Muslim north and a Christian south.

Muslims and Christians, who constitute 55 and 40 percent of Nigeria’s 140 million population respectively, have lived in peace for the most part.

But ethnic and religious tensions have bubbled for years, fuelled by decades of resentment between indigenous groups, mostly Christian or animist, who are vying for control of fertile farmlands with migrants and settlers from the Hausa-speaking Muslim north.