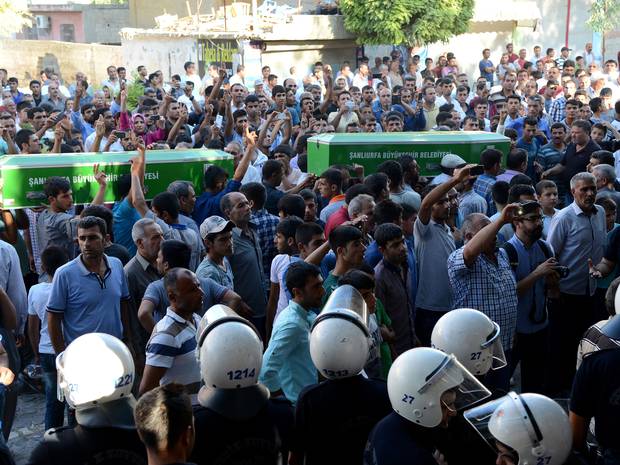 Suruc funeral in wake of the deadly attack.

An explosion on Monday outside a cultural center in the southeastern Turkish town of Suruç, which is near the country’s border with Syria, killed at least 31 people and wounded more than 100, in what may have been a suicide bomb attack by Islamic State in Iraq and the Levant (ISIL) militants.

The explosion occurred at around 11:50 a.m. in front of the Amara Culture Center while a large number of Socialist Youth Association (SGDF) members, who came from İstanbul, Ankara, İzmir and Diyarbakır, were making a press statement regarding the reconstruction of the Syrian border town of Kobani. Turkish media reports said 300 people from the SGDF were preparing to travel to Kobani to help with the rebuilding.

There was no immediate claim of responsibility for the midday blast. Initial reports had said the explosion was a suicide attack and the bomber was reportedly a member of ISIL, and Turkish officials speaking to Reuters also said preliminary evidence suggested an ISIL suicide attack caused the blast. The Turkish newspaper Hürriyet’s website, citing official sources, said the attack is suspected to have been perpetrated by a 18-year-old female ISIL supporter.

“This is a terrorist attack by a suicide bomber. The target of this attack is Turkey,” he said. Davutoğlu also called on all political parties to adopt a joint stance in the face of this attack. “I also want to make a call to our nation. Maintain your common sense,” he added.

“We have convened with security officials and planned the steps that we will be taking,” Davutoglu continued.

“Measures on our border with Syria will continue, and will be increased,” he said.

The death toll was 31 as of Monday evening, according to Deputy Prime Minister Numan Kurtulmuş. A statement from the Interior Ministry said more than 100 people were injured and that the death toll may increase.

“We confirmed that it was a suicide bomber. … However, whether the suicide bomber was an 18-year-old, how old the bomber is — our teams and security forces have been working to find out. As the incident is so fresh, we don’t have information about the identity of the bomber. Crime scene investigation teams and a large number of members of the security forces have been conducting an investigation to produce a result. We will share that information with the public when it comes,” Küçük said.

President Recep Tayyip Erdoğan, who was in the Turkish Republic of Northern Cyprus (KKTC) to attend a ceremony marking the 41st anniversary of the 1974 Turkish military intervention, which is called Peace and Freedom Day on the island, called Turkish authorities to get information on the attack.

Speaking during a joint press conference in the KKTC, Erdoğan condemned those behind the terrorist attack in southeastern Turkey.

“Terror has no religion, no ethnicity, no nationality, no country. We always stated that an international struggle should be taken up against terrorism, we continue to express this,” Erdoğan said in his remarks, which were broadcast live.

The Turkish media, citing Social Services Laborers Union (SES) Şanlıurfa branch official Dilşad Doğan, reported that the death toll was as high as 31 and that 35 people were seriously wounded in the incident.

Television footage showed bodies lying beneath trees outside the building in the mostly Kurdish town of Suruç in southeastern Turkey, which lies some 10 kilometers (6.2 miles) from the Syrian border. Video footage showed the blast coming from just behind the students as they gathered behind a banner declaring support for Kobani. “We defended it together and we will rebuild it together”, read one of the group’s banners at the scene.

“I was behind a banner so I couldn’t see the attacker, but we understand it was a suicide attack. I was thrown to the ground but I did not faint. I jumped up and began running before I even realized I was hurt,” Edemen, a 22-year-old journalism student at Ankara University, said by telephone.

The blast also shattered the windows of nearby buildings. Police and ambulances were dispatched to the scene after the incident. Wounded people were taken to the Suruç State Hospital, while those in critical condition were sent to other hospitals in the Şanlıurfa city center.

“I saw more than 20 bodies. I think the number of wounded is more than 50. They are still being put into ambulances,” one witness told Reuters by telephone, giving his name as Mehmet. “It was a huge explosion, we all shook.”

Pervin Buldan, a senior lawmaker from the pro-Kurdish Peoples’ Democratic Party (HDP) , said the blast happened as Turkish and Kurdish youths gathered at the cultural center ahead of a planned trip to the town of Kobani in Syria, which was finally secured by Syrian Kurdish fighters last month after a prolonged assault by ISIL militants.

“Turkish and Kurdish youth had come to cross into Kobani, and there were three or four days of activities planned,” she told Reuters, adding that HDP lawmakers were on their way to the scene.

A video posted on Facebook by one of the group of youth activists showed at least 20 people lying on the ground, some still alive. People milled about trying to comfort the wounded as others cried out. Smoke and dust rose from the ground.

In a written statement released on the Peoples’ Democratic Party (HDP) website, the party’s Co-chairpersons Figen Yüksekdağ and Selahattin Demirtaş appeared to hold the Turkish government responsible for Monday’s attack.

“All countries and regimes that ISIL and ISIL-like offensive troops take support from are partners in this brutality. Those who remain silent against ISIL, who don’t dare to raise their voice, the authorities in Ankara who caress ISIL’s head while uttering treats against the HDP are collaborators and accomplices in this,” the statement declared.

The HDP leaders also called on Turkey’s interim government to account for bombers walking freely on the streets of Suruç.

“The current government is responsible for the every intelligence and security gap,” the HDP leaders stated.

Suruç is just across the border from Kobani, which was the scene of fierce battles between Kurdish groups and ISIL. Kobani was the ISIL group’s largest defeat last year ever since the militants established control over large swathes of Iraq and Syria. The city has become a symbol of Kurdish resistance.

A second bomb went off Monday south of Kobani near a Kurdish militia checkpoint on the road to Syria’s largest city, Aleppo, according to Idriss Naasan, a Kurdish official in Kobani. It caused minor damage and no casualties, he said.

The explosion comes weeks after Turkey deployed additional troops and equipment along parts of its border with Syria, concerned about the risk of spillover as fighting between Kurdish forces, Syrian rebel groups and government troops and the ISIL militants intensifies.

Turkey’s leaders have said they do not plan any unilateral military incursion into Syria, but have also said they will do whatever is necessary to defend the country’s borders.

Ankara fears any disorder in the border area could re-ignite an armed Kurdish separatist rebellion by the Kurdistan Workers Party (PKK) that has killed some 40,000 since 1984.

Turkey’s Kurds have been enraged by what they see as Ankara’s failure to do more to stop ISIL. The PKK has declared that it holds the government as responsible for Monday’s attack, saying it had “supported and cultivated” ISIL against the Kurds.