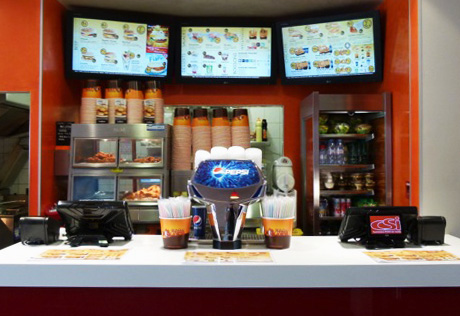 I’ve been fortunate enough to work in the halal restaurant business for the last twenty years. I say fortunate, because for me it’s not just about earning an income, but an opportunity to serve the Muslim community.

What began as a part-time pizza delivery job on weekends eventually turned into opening a family pizza business nestled among Melbourne’s thriving Muslim community in the northern suburbs.

After twenty years of serving customers during Ramadan, I’m almost immune to the chaos that springs up during the time of breaking the fast.

From customers who rush to make large orders just minutes before Iftar, to those who want their pizza at their door right on Maghreb time “not a minute later or earlier,” I’ve learned to stay patient and simply go along with their requests.

I had a discussion with one of my staff members this week, and asked the perennial question that I seem to find myself asking every Ramadan: “Why do we have the same issues crop up every year?”

Yusuf – my dough maker – in his usual wise tone, replied “They just don’t know. They have to be told that what they’re doing is actually making things worse for them in ordering during Ramadan, not better. They just need to be educated.”

That sounds good in theory, but how do you educate anybody during the hustle and bustle of the Iftar period, when all they want is their tandoori chicken pizza and a can of Vimto?

Inspired by his idea, I decided to share some of the typical issues that occur every year, and what I feel, after many years being on both sides of the counter, you should know about eating out during Ramadan.

The more you know about how food business operate during Ramadan, the more you can be prepared and likely to enjoy a Ramadan free from th stress of eating out on time.

As I got into discussion with other restaurant owners, there seemed to be seven regular issues that present themselves every Ramadan.

You’ll notice that every one of them is pretty much common sense, but as always, you’ll be surprised how irrational people become when all they’re thinking about is diving into their chicken parmagiana.

Here’s the seven most common. Some you will have committed, inadvertently, yourself, and others will make you just think “No…really?”

1. Be Aware of Changed Opening Times. Some businesses, particularly those that focus on breakfast, may not even open during Ramadan. Others adjust their opening hours to account for an earlier Maghreb time and quieter times after Isha. In our business, we alert our customers around three weeks prior to these changed times via our Facebook page and pamphlets handed out with every order.

We also make sure we allow for earlier ordering times when the fasting period is during the winter. Now, that doesn’t save us from the usual “I didn’t know you changed your opening hours” that we get every year, followed by the regular advice on how we should have warned people. Just be aware that in all likelihood, there will have been some form of notice put out if there is a time change.

Tip: Your local food businesses will do what they can to inform people about a change in times, but you should also call them prior to Ramadan and ask them if they will be making a change.

2. Remember, We’re Fasting Too. Muslim customers can often easily forget that the girl behind the counter is often a Muslim who is also fasting. She will be hungry, low on energy, and looking forward to breaking her fast. So give the staff a bit of break. They’re bound to be a little irritable, perhaps forgetful and not at their very best. And remember…they probably can’t eat or pray for an hour or two after you do.

Tip: Think of how you’re feeling and remind yourself that the person serving your food is probably feeling exactly the same. If you don’t like being harassed, argued with and bossed around in the last few minutes before Iftar, you can be sure that they don’t like it either.

3. Don’t Be a Last Minute Larry! So, Maghreb is at 6.53, and at 6.50 Iqbal and his fourteen friends storm in with no prior order, wanting a table prepared and eight family pizzas before the azan is called.

Mariam calls twenty minutes before Iftar, panicking about not having food ready for her kids, and needs six roast chickens delivered in fifteen minutes…but definitely not after twenty-five minutes.

Sounds nuts, right? Well it actually happens very often during Ramadan. And from my conversations with other halal food businesses, they all encounter the same problem.

As a customer, be aware that calling at the last minute means you have almost no chance to get your order before Maghreb. It also places extra stress on staff, as they also need to work through orders placed before yours.

Tip: Place your order as early as possible, and if you are planning on eating in, ask if it is possible to pre-order before you arrive.

4. We’re Working as Fast as We Can. It’s funny how many customers feel that the staff are intentionally working to hold back on sending out food, or put in place a system that delays the delivery of their order. Brothers and Sisters, if there is one thing every restaurant and take-away food shop strives to do is get your food out as soon as possible! Nobody wants food sitting around with grumpy customers milling around. The business you visit will do everything possible to serve you as rapidly as possible.

Tip: Just be patient. The staff are doing everything they can to get your food out as early as possible, in a pretty difficult time window. Stopping everyone to ‘check on your order’ every thirty seconds only succeeds in slowing things down.

5. Order Early, and Be Organized. Some years ago I had a group of guys who came in right on the last minutes before Iftar. They strolled up to the counter, with several other people eager to order waiting right behind them, and began to go through every pizza on the menu, asking mundane questions and deliberating on their order. I could see the customers behind them fuming as these guys had at least several minutes prior to think about what they wanted. Yet once they got to place their order, they were clueless.

The same goes for those who call on the phone in a hurry to place their order, then scream out to their family, “Hey what does everyone want?!” while a staff member has to wait and overhear the ensuing arguments on the other side of the line.

This is both disrespectful towards the time of the staff and the time of other customers.

Tip: Organize your order as early as possible, and place the order the moment you are settled on what it is. Calling up any restaurant and then thinking about what you would like is likely to get you in the bad books with any shop owner.

6. You’re Not the Only One. I can’t tell you the amount of times I’ve seen people rush in, place an order, and then discreetly ask if their order can be completed before everyone else’s. They don’t take into account that others have been waiting longer than they have, or that the time they have allowed for is simply not enough. All they are thinking is that they are fasting, and they want their food first.

It’s important that you keep in mind that everyone wants their order as soon as possible, and anybody seen to be cutting in to the queue could face a verbal challenge or two from the mom’s waiting patiently for their order.

Tip: Be respectful of the fact everyone around you feels like you do. The staff are doing their best to serve you has fast as they can. Requests to treat you any differently, particularly during the chaos of Iftar periods, will probably have you singled out as a difficult customer.

7. We Know It’s Ramadan. Honestly We Do.There is one thing you should simply never do when ordering during Ramadan: lecturing the staff member on how you are fasting because it is Ramadan. Believe us, we know!

I’ve purposely left this one till last because it is infamously the most common problem we have every year. Customers will call up, and then slowly explain that they are fasting, and that their order should take precedence over everybody else’s because of this fact. We often diplomatically have to share with them that we are all actually fasting, and that the thirty-three orders prior to theirs are also from people fasting. Somehow…they sound surprised by that.

Tip: Halal restuarants know you are fasting. Most likely, the staff are also. Using the ‘I’m fasting’ complaint to get your order faster is probably not the best strategy during Ramadan.

I hope these tips have given you a bit of an insight into what to avoid doing when ordering to eat out. Whether it’s a five star restaurant or your local kebab shop, it helps everyone when both customers and staff have a better understanding of how the business operates and what we all can do to create a happier period during this blessed month.