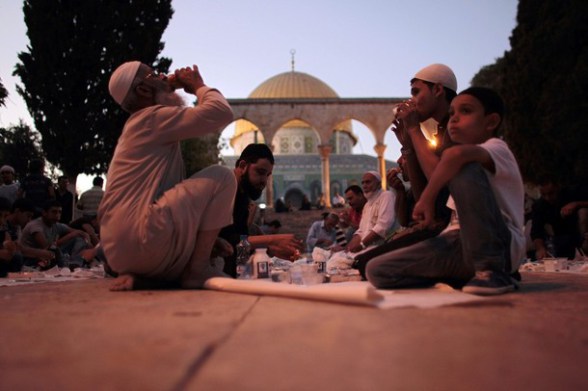 Palestinians eat donated food at the compound of the Dome of the Rock mosque known to Muslims as Noble Sanctuary and to Jews as The Temple Mount in Jerusalem's old city, as they break their fast during the holy month of Ramadan July 25, 2012. REUTERS/Ammar Awad (JERUSALEM - Tags: RELIGION)

Ramadan is the month of heightened Allah-consciousness, of attaining taqwa (piety), of training ourselves to be the best we can be; a month to initiate improvement of reputation, character and for the cultivation of good habits. People who try their best to live by the highest values are surely people of integrity and indeed people of moral conscience. What is morality though? Morality describes the principles that govern our behavior and relates to our behavior at three levels… how we as individuals ensure that we are honest, just and compassionate; how we interact with and contribute to society, as asset or liability; and how conscious we are of our accountability to our Creator.

Taqwa (Piety) in an amoral world

In a world, increasingly amoral, perception is considered reality. How one appears to the world has overtaken the substance of who we really are. Impressions, whether real or fake, are given more credence than it deserves. Though name, image and reputation are what we perceive of people; character is the essence of the “real self”. Taqwa is in reality character development coupled with God-consciousness.

The renowned philosopher, Aristotle, once said; ” You are what you repeatedly do “. Habits are conditioned responses, formed through repetition, until the actions or reactions become second nature; they end up as unconscious behavior, automatic reactions in a particular situation; (e.g. The way you sign your name, the reprehensible habit of cigarette smoking after a meal…) It was the English writer, Shakespeare, who said; ” First we make our habits, then our habits make us “. Thinking in a particular pattern creates a mental path, the mental path affects our attitude and our behavior, and these reflect our personality and character. In other words, our thoughts affect our attitude which affect our actions which determine our habits which reflects our character which could determines our destiny. The Roman poet Naso Ovid rightly said, ” habits eventually become character “.

According to Islam, habits are classified as virtues or vices, as repeated actions that are in conformity with or contrary to the rules of morality. Virtuous character emanates from good habits and good habits emanate from resisting negative temptations. Good habits, unfortunately, seem so much easier to give up than bad habits. Bad habits are like a comfortable bed; easy to get into but difficult to get out. The chain of bad habits are generally too light to be felt until they are too strong to be broken. Remember though, that every habit; whether good or bad, is acquired and can be developed or disowned. Habits decrease or disappear by abstaining from exercising them and then replacing them. In the words of Roman orator, Cicero, ” consuetudo consuetudine vincitur = habit is overcome/ conquered by habit. Ramadan is an ideal training period for filtering out bad habits, developing virtuous character and is thus referred to by Prophet Muhammad (pbuh) as a shield against evil and wrongfulness. We are obligated to nurture our noble qualities; control our passions, our anger and emotions. We are instructed to be considerate, generous and compassionate.

Prophet Muhammad (pbuh) referred to Ramadan as a blessed month in which Allah has made fasting obligatory on those who are able; whosoever denies himself of the benefits of that month denies himself many virtues. As we undertake the physical duty and spiritual responsibility of fasting in the blessed month of Ramadan, we reflect on the words of our beloved Prophet Muhammad (pbuh) who said that the practice of faith will not be correct unless actions are correct and actions will not be considered correct unless the heart is correct.