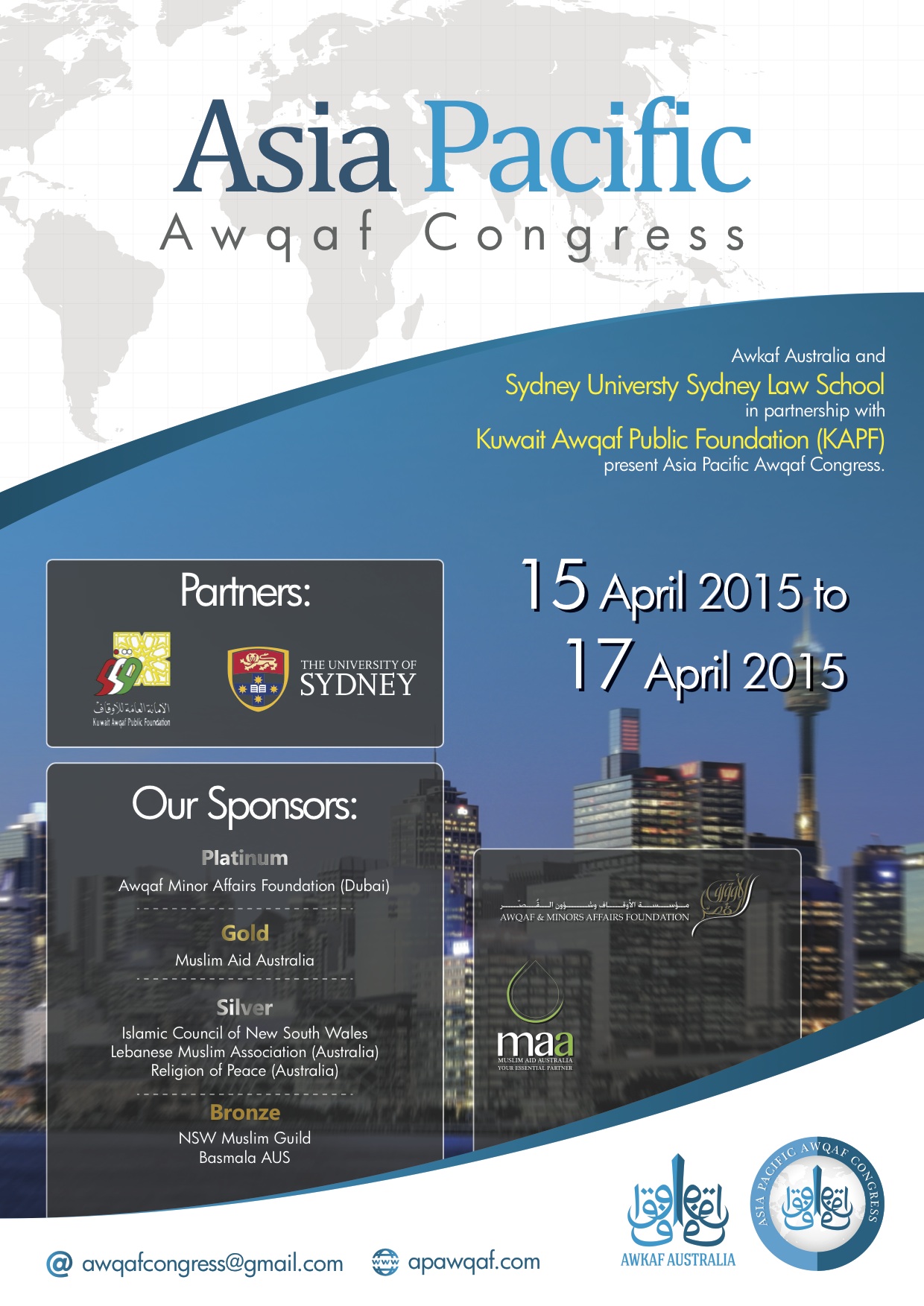 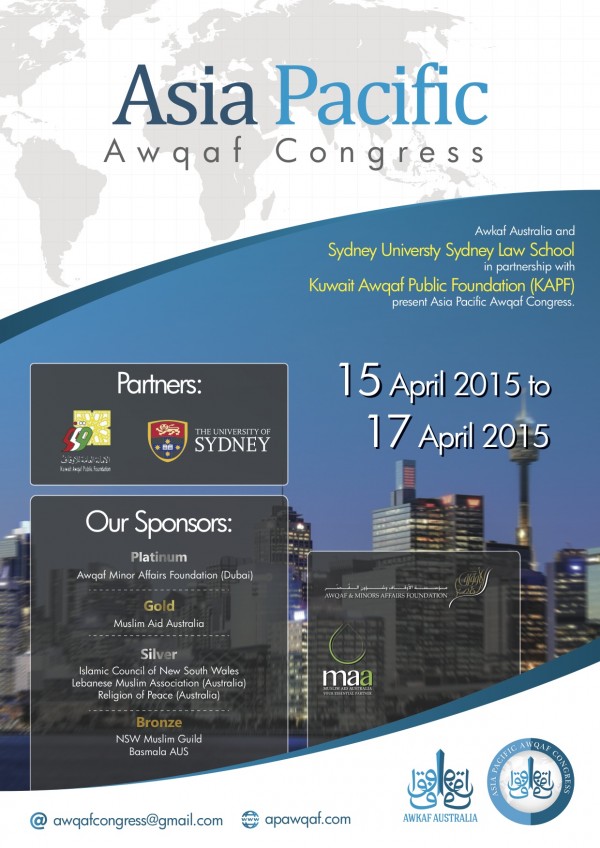 The Asia Pacific Awqaf Congress 2015 is taking place in Sydney Australia this week. This symposium is important for Australian Muslims and Muslim organisations who want to learn about Awqaf and who want to undertake Awqaf development. MuslimVillage.com spoke with the organisers to find out more about the congress and what exactly is “Awqaf”.

MV: What is waqf or awqaf?

Awkaf Australia: The word waqf (plural awqaf) is an Arabic word meaning stop or withhold. In the context of charity, it means withholding assets in perpetuity for a charitable purpose such that the asset cannot be sold or transferred in inheritance, but if need be, for the general good, (maslaha a’mma) it can be exchanged for another. Charitable purposes are not limited to a finite list and may include the relief of poverty, the relief of the needs of the aged, the relief of sickness or distress, the advancement of religion, the advancement of education and other purposes beneficial to the Islamic community.

The classification of Awqaf is based on the type of beneficiaries for whom the waqf asset (Al Mawqoof alaiyhim) is dedicated rather than the type of the asset itself. The three main categories are:

– Joint (Mushtarak) Waqf : This is a combination of both familial and Charitable Waqf.

Other types of Waqf include self-dedicated waqf where the Waqif dedicates the proceeds of the Waqf to himself during his lifetime. Thereafter, it passes on as a familial or charitable waqf. Another type of Waqf is one with non-Muslim beneficiaries. This type of Waqf is most common in Muslim communities in non-Muslim countries where non-Muslims may benefit from some of the amenities of the project.

In principle, the founder of the waqf (waqif) determines the type of management of the waqf. The waqf manager (nazer) has the responsibility to administer the waqf property to the best interests of the beneficiaries.

In many Muslim countries, government ministries or agencies were established for Awqaf. In western countries, Muslim communities have organized their Awqaf in accordance with Islamic Shariah within the limits of prevailing laws and regulations. For instance, in the United States of America, Canada, Australia and other western countries, Muslim communities administer their waqf properties in accordance with the laws regulating trusts, and general charitable organizations.

What sort of things do waqaf funds do overseas? Give us some real life examples?

Awqaf as an Islamic institution to combat poverty and enhance welfare has a developmental role. Awqaf is omnipresent in all facets of life ranging from education and scientific research to healthcare and social services, and from urbanization and transportation, to art and recreation. Major universities, hospitals, libraries, museums, orphanages, homes for the elderly, animal shelters and sanctuaries are prime examples of awqaf.

Awkaf Australia is an institution started up to serve all Australian Muslims regardless of background as primary beneficiaries and all Australians as secondary beneficiaries. The aim of Awkaf Australia is to diversify Awqaf development in Australia beyond Masjids and Islamic schools so as to address the resource and services gap that the community face. This sustainability strategy is aimed at promoting Awqaf development at following levels

i. Empowering individuals, families and organisations to develop their own Awqaf : There is limited awareness on Awqaf development and there are limitations posed by taxation and legal regulations in Australian. Therefore the empowerment is much needed.

ii. Partnering with community to jointly develop and manage Awqaf funds for education, youth job creation and other areas which will serve Australian Muslims regardless of background. This is the second much needed area but it will require a long time as it is a hard area.

What governance structure do you have and how will you ensure full accountability and transparency?

When the first Australia New Zealand Awqaf Development conference was organised in 2012 in UNSW, Australian experts were invited to present on the legal and audit issues simply because in Awqaf development there is a need to build strong system of compliance, accountability and transparency. Awqaf success depends on it. Awqaf failures have often been due to failures in all that.

In the case of Awkaf Australia, at this stage we are focusing on advocacy and doing feasibility studies of Awqaf-to-Awqaf projects. So at this infancy level where we are not receiving donations of Awqaf property, the demands for voluntary and obligatory reporting is low. However we are mindful that before we launch any wakf fund or A-to-A project, we will need to include a tailored governance structure that is separate from the management. Some of this is obligatory under Australian legal and taxation system.

The founders came from different backgrounds and agencies to start this up. Dr. Hisham Dafterdar is a senior member of Australian Muslim community, who has worked as a banker and also within the Islamic Development Bank. He is widely known in the Awqaf and Islamic economics circle globally. He is the chairman of Awkaf Australia.

Khaled Sukkarieh who is the head of Islamic Council of NSW is the Secretary General. The other directors include the following: Thameemul Ansari Jainullabudeen who is a health economist and who was previously the principal economist in charge of middle east economies in the Singapore government. He was also previously secretary of the Islamic Centre of Newcastle and is currently acting director of Basmala AUS;

Mrs Lydia Kamleh is an Australian lawyer based in Dubai and focusing on Islamic finance.

Sezgin Lok is from Redfern Turkish Islamic Society and served the Muslim community in the capacity as treasurer of the Islamic Council of NSW. He has a background in Halal Meat certification.

Tell us about the conference. How can people get involved?

Asia Pacific Awqaf Congress has two major events. On 15th and 16th of April 2015 Awkaf Australia and Sydney University Law School have organised Asia Pacific Awqaf Symposium. The presenters will include academics; institutions that have developed or support themselves partly or wholly through waqf; and Awqaf agencies. Cambridge Muslim College which is Europe’s leading higher Islamic Education institution will present on their waqf development experience. The world’s advanced waqf specialist hospital Indus Hospital from Pakistan will be presenting. We have a presenter from Malaysia’s largest legal firm presenting on the legal issues of Awqaf development in Malaysia which has lessons for us in Australia. The two winners of World Islamic Economic Forum Awqaf award for 2013 and 2014 from New Zealand and South Africa will be presenting. We are having academics from Malaysia, Saudi Arabia, UAE and Indonesia presenting.

This symposium is important for Australian Muslims and Muslim organisations who want to learn about Awqaf and who want to undertake Awqaf development. They can also find partners for their strategies in this event. There is interest from non-Muslim organisations to attend also. Seats are free but limited and need to be booked online.

On Friday 17th April, there will be a Community Day at Lebanese Muslim Association Hall. There will be a day for community to visit various participants and spend time to learn, interact and network. We are also inviting Australian organisations to set up tables and showcase their projects.

Tickets , free but limited, can be booked at http://apawqaf.eventbrite.com.au/

More information can be found at http://apawqaf.com/