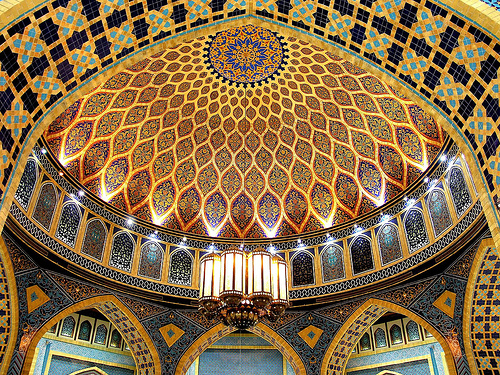 To paraphrase Monty Python, what has Islam ever done for us? You know, apart from the algebra, the trigonometry, the optics, the astronomy and the many other scientific advances and inventions of the Islamic Golden Age.

Well, if you like art and interiors, there’s always the stunning patterns that grace mosques, madrasas and palaces around the world.

Islamic craftsmen and artists – who were prohibited from making representations of people in holy sites – developed an instantly recognizable aesthetic based on repeated geometrical shapes.

The mathematical elegance of these designs is that no matter how elaborate they are, they are always based on grids constructed using only a ruler and a pair of compasses.

Islamic design is based on Greek geometry, which teaches us that starting with very basic assumptions, we can build up a remarkable number of proofs about shapes. Islamic patterns provide a visual confirmation of the complexity that can be achieved with such simple tools.

Dust off your old geometry set, and let’s see how. The template has a circle in a square, divided into 12 equal sections. (We could have got this using a compass, but let’s assume you know how to do this). Put the compass point on each corner of the square to draw the first four quarter-circles.

When it gets tricky it can help to mark the intersections before you draw the line.

Beginning to take shape now. I tried this at home and it was really fun but quite fiddly – and made me respect the skills of the craftsmen of a thousand years ago, who didn’t have retractible pencils, endless sheets of high quality paper or computer printers.

You are now allowed to use the red Sharpie.

It’s looking good. And here we are.

The step by step guide above was made by Eric Broug, one of the most active practitioners of Islamic geometric design working today.

Eric is a Dutchman who lives in Halifax, West Yorkshire.

“Geometry is really a universal language, everyone can – and does – relate to it instinctively,” he says. “There is a joy to be had in starting with a blank piece of paper and to draw lines and circles and end up with a pattern that is recognizable and beautiful. This process connects you very directly to a design heritage.” Islamic geometric design mixes elements of maths, art and history. Trying to decipher the steps that led to finished patterns is like a mathematical puzzle. Constructing new pieces involves creativity mixed with an understanding of the various styles and embellishments the ancients used.

So how did a Christian Dutchman end up an international ambassador for Islamic design? Eric, aged 48, was in his 20s studying Middle Eastern politics at university in Amsterdam when, by chance, he found a book on the subject in a local bookstore. He was hooked. In 2000 he moved to London to study Islamic design at the Prince’s School for Traditional Arts. He later took an MA in the History of Islamic Art and Architecture at the School of Oriental and African Studies (SOAS).

Eric has a full-time job at an academic publisher, but in his spare time writes books, gives talks and workshops and runs an atelier in Halifax that designs bespoke screens, logos and other work for clients around the world. About half of his clients are Muslim. Do they find it odd that he isn’t? “In the 20 years I have been practising Islamic geometric design, I have been asked maybe once or twice whether I was a Muslim. It’s a non-issue. Human beings like beautiful things. I want to engage with people and show them the beauty and design techniques involved in making these patterns.”

“My desire is to popularize this tradition – to make it accessible to anyone who can draw a line and a circle,” he says. Eric’s screens are made from steel, wood or Perspex. “The first screen I ever manufactured was for an American lady in Nebraska. I don’t treat Islamic geometric patterns as universal or generic. So, for example, a client who wants screens for a Turkish restaurant, will be best served with geometric patterns from the Seljuk or Ottoman era. It wouldn’t make sense to use Moroccan patterns in the decor of a Turkish restaurant, after all!” Eric hopes that his research and outreach work will breath life into future of Islamic geometric design. “If we can identify and define what is excellent in the past eight to ten centuries, we can start to come up with an educational strategy to revitalize it in the 21st century so that it once again is a creative realm where innovation pervades. Currently, there is almost only replication of patterns, very little innovation.” The following patterns show how a pattern of overlapping hexagons can become a dodecagons.

“What I love about these four patterns is that they show the creative thought process of a craftsman,” he says. “He might have asked himself: ‘What if I change these hexagons into dodecagons, I wonder what pattern I might create?’”

The most interesting patterns mathematically are those based around pentagons, such as the one below, since pentagons cannot be tiled repeatedly to fill the plain in the way that hexagons, squares and triangles can. Here’s a watercolour Eric made with heptagons, a variation on a detail from a Mamluk minbar in Cairo. “I love this design because it looks so contemporary and bold even though it was designed in the 15th century.” If Eric started to offer a tattoo service, I’m sure this design would do well.