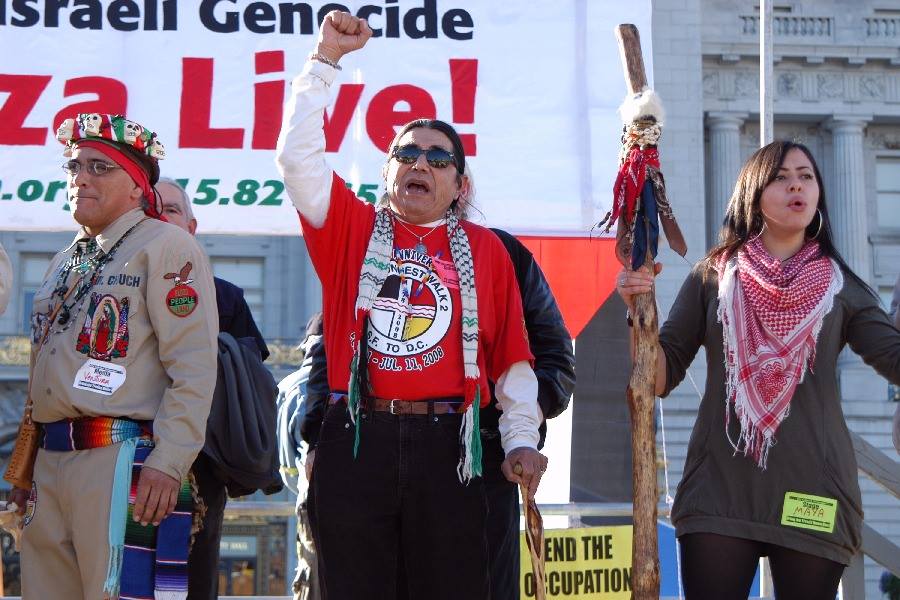 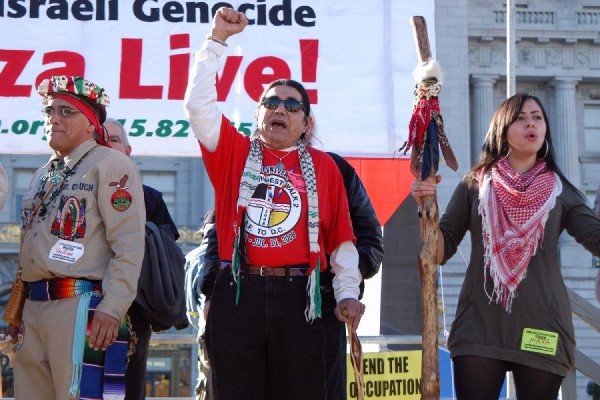 The parallels to the plight of the Palestinian people and Native Americans have been drawn by many. Speaking in San Francisco, Tony Gonzales of the American Indian Movement (AIM), ”with a common legacy of bantustans (homelands) – Indian reservations and encircled Palestinian territories – Native Americans understand well the situation of Palestinians.”

While there are certainly diverse views on nearly every political issue imaginable within Native American communities, a growing number are beginning to empathize with and see a disturbing parallel between what happened to the First Peoples of North America, and Palestinians in the Levant.

The Native American and Indigenous Studies Association made news back in December of 2013 for being one of three academic groups based in North America to endorse the Palestinian campaign for an academic and cultural boycott of Israel.

In January of 2013, the Jerusalem Post ran a telling article, entitled: “Native Americans turning on Israel?” The article focused on an anecdote of Muscogee Creek scholar and literary diva Joy Harjo, who ignited a “firestorm of controversy when she announced on Facebook that she was leaving for a trip to Israel where she was scheduled to perform.”

But most revealing was the article explaining just how much opposition there was within her Native community and others: opposition to her support for the Israeli State and its relationship with the Palestinian people.

Gyasi Ross, writing “Why I, as a Native American, support the Palestinian people,” explains the following:

As a Native person of this country, I’ve come to the conclusion that I must support the Palestinian people and the pursuit of an autonomous Palestinian state.

Although many view both Native Americans and Palestinians as “indigenous and displaced people,” this is not the reason that I feel a sense of kinship with Palestinians.

Instead, this fraternal feeling for my brothers and sisters in Gaza and on the West Bank is due to a much more basic and primal feeling of fear: the realization that what befalls one oppressed group inevitably befalls others.

Indigenous people, as well as other oppressed groups worldwide, regardless of race or religion, have a vested interest in learning from the genocidal atrocities that the U.S. government initiated on Native Americans. Every person who strives for humanity also has a strong interest in preventing those same atrocities from occurring in another place at another time to another group of people — in this particular situation, to the Palestinians.

Palestinians, like Natives, are captives in their own lands. They, too, have no place to go, no geographical recourse. Lebanon, Syria and Egypt have all shown their callousness to Palestinian people and have used them like human chess pieces against Israel.

Short on options, Palestinians, like Natives, have no choice but to continue to be a thorn in the side of the oftentimes apathetic and oppressive governments that have come to power by whatever means available.

Native American peace activists are becoming an increasingly visible presence at protests against the War in Gaza. For many, Ross’s words sum up the motivation and reasons for support.