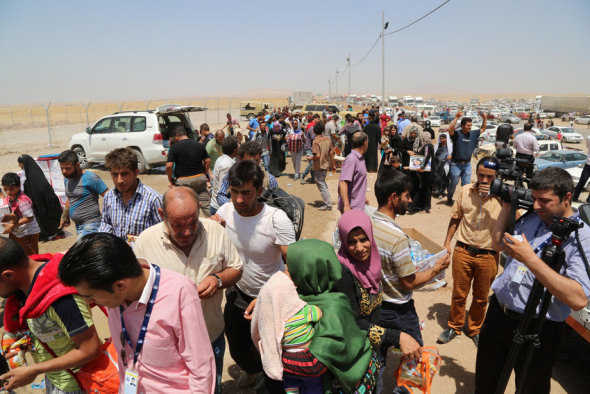 By: Sheren Khalel and Matthew Vickery

Qasi Mustafa Abu Khalil and his family packed all of their belongings into one car and fled their home in the middle of the night. They were too nervous to look back as they left Mosul, the second largest city in Iraq all eyes were glued on the road for Islamic State (IS) checkpoints, and the sky for Iraqi Government military jets.

The Abu Khalil’s have lived as refugees in Iraq since their family fled Palestine in 1948 during Israel’s war of independence, which forcibly displaced over 700,000 Palestinians from their homes and into the life of a refugee.

Today, like many Palestinians in Iraq, Abu Khalil and his family find themselves fleeing for their lives yet again. Over 300 Palestinians have recently fled the city of Mosul, which was taken over early June by The Islamic State (IS), formerly known as the Islamic State of of Iraq and the Syria (ISIS), an offshoot of the Islamic militant group Al Qaeda.

“In my mind I don’t think I will ever come back to Mosul,” Abu Khalil told Mondoweiss.

Since IS’s siege of Mosul and the surrounding areas an estimated one million people have fled the area seeking refuge. These refugees have reported whippings in the streets, executions for smoking tobacco hookah pipes and a crackdown on the movement of women. Regular life has been turned upside down in Mosul, where IS militants decide the rules and who they believe are following them.

Abu Khalil said the problems in Mosul started with the IS’s takeover of the city but continued with the Iraqi Army’s airstrikes against the city after the seige. The airstrikes are meant to target IS but the people fleeing say they feel they are indiscriminate leaving the people of Mosul constantly afraid from both the militants on the ground and the planes in the sky.

“It is scary now that these Islamic State people are in Mosul, because we can’t predict them, we don’t know what they want or if they like Palestinians. And now the Iraqi government is bombing everything. They’re doing this everywhere, the army airstrikes can hit anyone at anytime,” Abu Khalil said.

Issa Mustafa and his whole family have also fled Mosul, choosing an uncertain future over taking the risk that IS will decide being Palestinian is some sort of infraction.

“We got out of the whole situation in Mosul, it’s not safe to the people, to my family, to the Palestinians living there. We had a problem from the Islamic State from when they came into Mosul.  Because of this reason we left and got out, we don’t know where these Islamic State people are from, who supports them, what directions they have, or whether or not they will like Palestinians,” Mustafa told Mondoweiss.

His six children are all young and remain unaware of why they left their home at 2am to pile into their family car and flee from the only home they have known throughout their short lives. Mustafa is at least happy his children are young, he hopes by not knowing, they will keep their innocence.

Refugees fleeing Mosul have sought refuge in newly set up refugee camps beside or in Iraqi Kurdistan, or if they are lucky, with family and friends that live in safer areas under Kurdish Peshmerga control. However for Palestinians living in Mosul leaving the city was not easy and came with its own risks due to their nationality.

When IS came to their homes most Palestinians pretended to be Iraqi, in case being Palestinian would put them in danger.

“If they knew I was Palestinian, some of the Islamic State would probably want to kill me. The Islamic State people don’t know if we are Palestinian or not because we have the same accent as Iraqis, I have talked to them when they have come to my house and they have no idea I am Palestinian. But I was nervous when we left the city, if they ask you at a checkpoint for ID they will know we are Palestinian, and I don’t know what they would do after. On the Iraqi ID it says Palestinian refugee on it,” Abu Khalil said.

Many Palestinians still reside in Mosul, but can’t afford to leave. According Abu Khalil and Mustafa, most Palestinian families in the city are poor and just the travel to leave the city is out of their means.

The Palestinian Consulate in Erbil, Kurdish Iraq, is doing its best to keep up with all the cases of new Palestinian refugees fleeing areas under siege by IS, while attempting to help Palestinians avoid the newly created, and already crowded, UNHCR’s IDP camps.

“Some families are able to stay with friends they know or family they know in Erbil, many people in one room, but others are having to stay in tents in Khazir IDP Camp. We are trying to avoid this. And there still remain many Palestinian families left in Mosul as they simply cannot afford to leave, their only option has become to stay in this dangerous city of Mosul, we can only do so much,” Palestinian Ambassador Nazmi Hazouri told Mondoweiss.

Leaving Mosul has resulted in the displacement yet again of some Palestinian families, who are often treated like outsiders in their host country.

Mustafa said fears his sons will become refugees yet again with their future families, just as his he and his forefathers have for three generations before him.