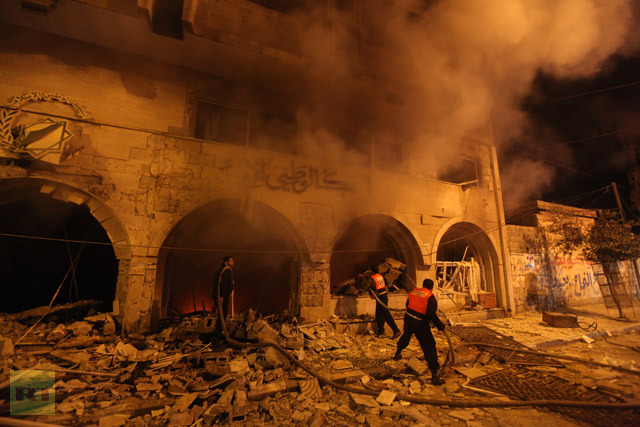 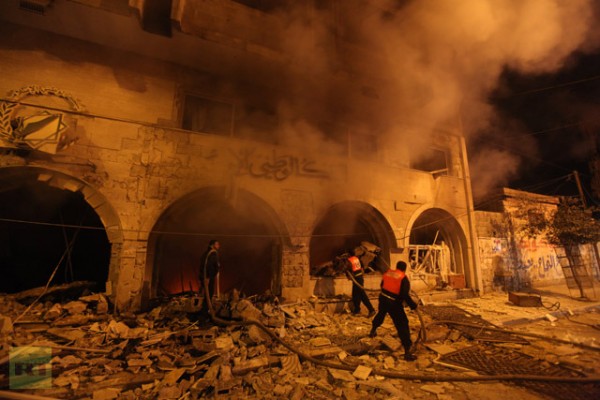 Israel has resumed air strikes on the Gaza Strip just hours after agreeing to an Egyptian proposal for a ceasefire that was not formally accepted by the Palestinian group Hamas.

Fresh air strikes were launched on Gaza at around 12:00GMT on Tuesday after Hamas fired nearly 76 rockets at Israel since 9am, the Israeli army said. “We have resumed our operation against Hamas,” the army tweeted.

The Israeli cabinet approved a ceasefire proposal from Egypt on Tuesday morning, which would have put an end to the week-long conflict that has killed 193 Palestinians and injured more than 1,400 others in the Palestinian enclave.

The violence claimed the first Israeli fatality late on Tuesday. An Israeli man died of his wounds after Hamas said it launched a rocket at Erez border crossing.

At least 10 Israelis have been injured by rockets fired from Gaza during the conflict.

Hamas official Mushir al-Massri said that the group was never consulted in the formulation of the ceasefire and only learned about it from media reports.

He said that Hamas rejected the proposal “in style because no body consulted with us in formatting it, [and] in content because its articles are a free service to the [Israeli] occupation”.

Meanwhile, Abu Ahmed, a spokesperson for the military wing of Palestinian Islamic Jihad, said that the group didn’t “accept a calm for calm agreement”.

Life had slowly been returning to a state of relative normalcy in the strip on Tuesday morning, with shops opening and more cars on the road, but many people remained suspicious that the violence would really end.

“We don’t trust the enemy,” said Maher Jarad, a taxi driver in Gaza City. “The Israelis are looking for a [way] to present their alleged victory to their public.”

In remarks with the visiting German foreign minister, Israeli Prime Minister Benjamin Netanyahu suggested that the agreement would be used to completely “disarm” the strip, a condition Hamas and other groups would not accept.

“The Egyptian proposal gives the opportunity to address the disarmament of [Gaza]… through political means,” Netanyahu said. “But if Hamas will not accept the proposal for a ceasefire, as it appears right now, Israel will have international legitimacy to expand the military operation.”

Hamas has demanded that Israel stop its aggression in Gaza, reduce restrictions on movement in and out of the territory, and release the dozens of Palestinian prisoners that were freed in a prisoner swap in 2011, but were subsequently rearrested.

The two most hawkish members of the Israeli security cabinet, Foreign Minister Avigdor Lieberman and Economy Minister Naftali Bennett, voted against the ceasefire.

Politicians on the centre-left supported it, though Isaac Herzog, the head of the opposition, warned that it would be “worthless and just another break before the next escalation” if it did not lead to meaningful negotiations with the Palestinians.

Danny Ayalon, a former deputy foreign minister, said that “the [Israeli army] will have to enter Gaza” if the ceasefire is not agreed by tonight, implying a possible ground operation.

“Israel can let the Egyptian proposal and mediation continue, and at the same time escalate, including a possible ground operation in Gaza,” said Shlomo Brom, a retired Israeli general. “Because actually, all of these steps are measures to place pressure on Hamas.”

Meanwhile, at Gaza City’s main hospital, al-Shifa, dozens of people gathered on Tuesday morning, holding shoes and slippers, to protest the arrival of Palestinian Health Minister Jawwad Awad from the West Bank. Awad is expected to inspect the healthcare situation in Gaza.

“Abbas is [a] spy, Hamdallah is [a] traitor,” the young men shouted, referring to Palestinian president Mahmoud Abbas and Rami Hamdallah, the prime minster of the new Palestinian consensus government. An outgoing Palestinian rocket was heard during the protest, and traces of smoke were seen overheard. “Strike, strike, Tel Aviv,” the crowd chanted.

In southern Israel, too, there was little faith that the truce would hold. Cafes and shops were emptier than usual, and rocket sirens rang out every half-hour or so.

“It’s a joke. It makes the state and the army look weak,” said Udi Lazarov, a resident of Ashdod, a southern city where a rocket hit a house on Tuesday morning. “We should finish the job.”