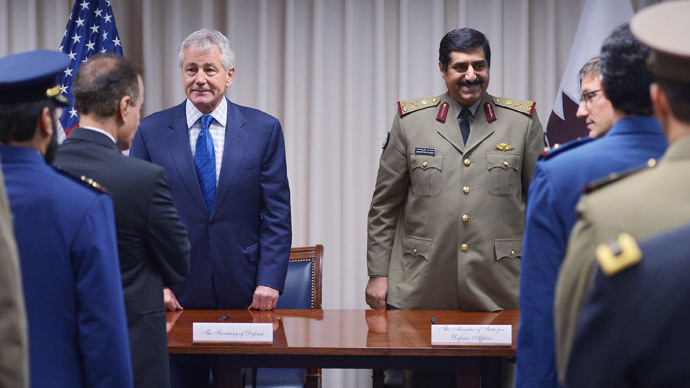 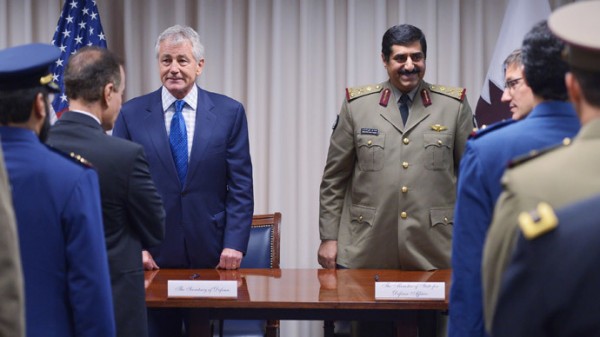 The deal has been signed on Monday in Pentagon by US Defense Secretary Chuck Hagel and Qatari Defense Minister Hamad bin Ali al-Attiyah. Altogether Qatar is buying 10 batteries of Patriot missile defense systems and 500 Javelin anti-tank missiles manufactured by US defense industry giants Raytheon and Lockheed Martin, and 24 Apache helicopters made by Boeing, an anonymous US official told the AFP.

The Patriot complexes with 247 PAC-3 missiles cost over $7 billion, the Apache helicopters and related gear are worth over $3 billion, and the Javelin anti-tank missiles cost additional $100 million.

“Today’s signing ceremony underscores the strong partnership between the United States and Qatar in the area of security and defense and will help improve our bilateral cooperation across a range of military operations,” said in a statement Pentagon spokesman Rear Admiral John Kirby.

Last December US and Qatar signed a 10-year Defense Cooperation Agreement ensuring presence of American troops at the military installations in the area, including the Combined Air Operations Center at Al Udeid Air Base, and closer interaction between American and Qatari armed forces. The agreement was signed in Qatar by US Defense Secretary Chuck Hagel and Qatari Defense Minister Hamad bin Ali al-Attiyah.

“This is a critically important relationship in the region,” Kirby said. “And the secretary is pleased to be able to continue to make it stronger.”

Pentagon claims that new order from Qatar will create 54,000 jobs in the US.

It has been a priority for the US in recent years to improve the air defenses of American allies in the Persian Gulf, remaining “the defense provider of choice” for Qatar and other Gulf States, the same anonymous official informed the AFP.

Qatar is investing in missile defense systems because of the missile arsenal of Iran across the Persian Gulf, the official said. Tehran possesses multiple missiles capable of reaching Qatar in case of a regional conflict.

Qatari authorities have been acting as intermediary when it comes to organizing negotiations between the Taliban in Afghanistan, and American and Afghan governments after a Taliban office opened in Qatar last summer ahead of renewed talks.

In January this year, another set of secret negotiations between the Karzai government and Taliban took place in the United Arab Emirates.

Qatar also contributed to the US-Taliban deal that ended in release of Army Sgt. Bowe Bergdahl on May 31 this year. Bergdahl, who spent five years as a Taliban POW, was delivered to Qatar in exchange for the release five Taliban commanders imprisoned at Guantanamo Bay US detention facility in Cuba.

There have been reports that Qatar has been actively participating in a number of conflicts in recent years, such as ousting Libyan leader Muammar Gaddafi in 2011 and the ongoing civil war in Syria.