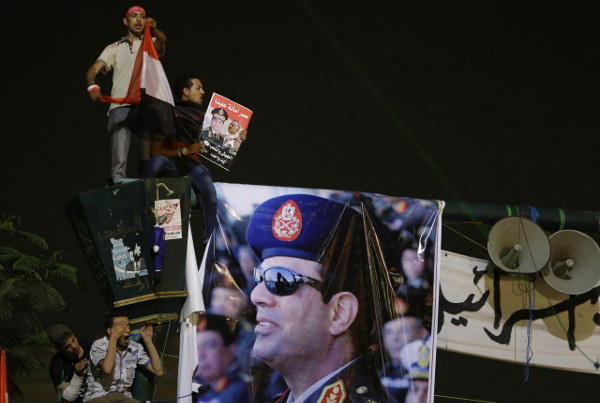 Egypt’s top generals have cleared the way for army chief Abdel Fattah el-Sisi to run for president, state media has reported, setting the stage for him to declare his candidacy in the coming days.

The Supreme Council of the Armed Forces said it would release a full statement “within the coming hours.”

Sisi had been widely expected to announce his political plans this week, after voters overwhelmingly approved a new constitution drafted by the army-backed interim government.

The army chief, who also serves as defence minister, led the toppling of former president, Mohamed Morsi, in July. Analysts say Monday’s announcement was intended to show that he has the full support of the military establishment.

Earlier, interim president Adly Mansour had promoted Sisi to the rank of field marshal. The two men are to meet later on Monday, according to local media. Sisi is expected to make a formal announcement about a possible presidential bid later this week.

In a brief speech on Sunday, Mansour announced that Egypt would hold presidential elections before parliamentary polls, reversing the order set out in a political “road map” outlined after Morsi was overthrown.

“Most of the political forces demanded presidential elections first, and I have amended the road map to meet their demands,” he said.

If Sisi does run for president, he is expected to win by a landslide. Only one other candidate – Hamdeen Sabbahi, who came third in the 2012 presidential election – has announced that he will run against him.

Other possible contenders, including former prime minister Ahmed Shafiq and retired general Sami Anan, have said they will wait to see whether Sisi runs before making any decision.

Monday’s announcement comes two days after tens of thousands of Egyptians demonstrated to mark the third anniversary of the 2011 revolution that overthrew former president Hosni Mubarak. Demonstrators said little about the uprising and most of them waved posters of Sisi, urging him to run for president.

Also on Monday, deputy prime minister Ziad Bahaa el-Din announced that he was resigning from the interim government.

In a letter dated January 23, Bahaa el-Din said he was stepping down to “resume his political and party and legal work” outside the government.

Bahaa el-Din is considered one of the more moderate figures in the cabinet and has been critical of a crackdown on Morsi’s Muslim Brotherhood organization and other groups opposed to the government.