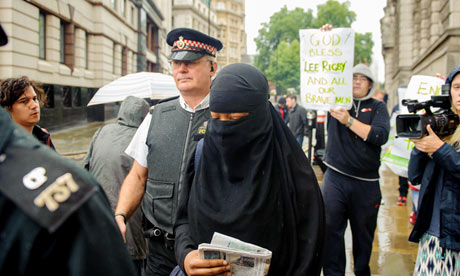 A Muslim woman standing trial in a full-face veil, who was told she must remove it if she gives evidence in her defence, will not take to the witness box, a court has heard.

Rebekah Dawson, 22, has been allowed to appear at her trial for alleged witness intimidation in a niqab showing just her eyes.

The trial judge, Peter Murphy, ruled last September that she could wear the Islamic garment in court but he said she would have to let the jury of five women and seven men see her face if she gave evidence.

Her barrister, Susan Meek, told the jury at Blackfriars crown court in London on Monday that she would not be giving evidence in her own defense.

Murphy had asked Meek whether she had told her client that the jury would be free to “draw such inferences as might be proper” from a decision not to give evidence.

Meek said she had.

“Does she intend to give evidence?” he asked.

Dawson, of Hackney, east London, is on trial alongside her brother, Matthias Dawson, 32, accused of intimidating a security guard at the Finsbury Park mosque in north London last June.

It is alleged they approached Daudi Yusuf at the mosque after an incident between him and Dawson’s husband, Royal Barnes.

Both defendants deny a single charge of witness intimidation.

Earlier in the trial, Murphy told the jury that Dawson was “fully entitled” to dress how she chose to in court.

He told jurors to put aside any feelings they might have about her appearance because they would have nothing to do with the case.

Matthias Dawson, a convert to Islam, gave evidence in his defense, saying he would not have done anything to help his brother-in-law.

“I don’t particularly like him, to tell the truth,” he said. “I don’t think he is good for my sister.”

He admitted attending the mosque with the hood of his hoodie raised.

But he said he had been there because he had been giving his sister a lift through the area, she had wanted to pray, and he decided to do the same.

He said he heard his sister talking to a man but denied being involved himself.