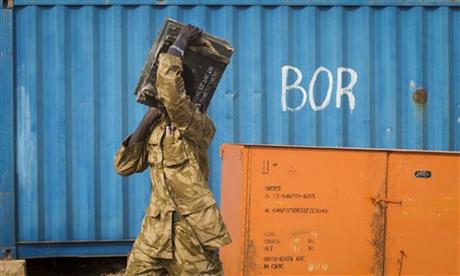 BOR, South Sudan (AP) — Bor is a ghost town. Every shop is looted and empty. Bodies lie on the ground, and English-language graffiti curses the ethnic group of the South Sudanese president.

Near the airport, the road is littered with trash. Shipping containers are pried open and their contents ransacked. Smashed cars and motorbikes litter the dusty streets.

Once held by the rebels attempting to overthrow South Sudan’s government, the city was taken back by the military over the weekend with the help of Ugandan troops.

More and more cities are falling back under government control after a conflict that began Dec. 15 saw rebels gain control of several key cities.

The government said Monday it has also regained control of Malakal, the capital of the oil-producing Upper Nile state, though the U.N. said its base there took fire, wounding nearly three dozen people and damaging the hospital.

Thousands of people have been killed and an estimated half million people have fled the fighting, which pits the government of President Salva Kiir, an ethnic Dinka, against former Vice President Riek Machar, an ethnic Nuer.

Negotiators for Kiir and Machar said over the weekend that a cease-fire was close at hand. But a Twitter feed believed to be controlled by Machar said Monday there won’t be a cease-fire until Ugandan troops supporting the government leave and high-level political detainees are released.

The government insists the detainees go through South Sudan’s judicial process. Kiir late Monday said he would pardon Machar if he surrenders.

The governor of Jonglei state, where Bor is located, urged residents to return to their shattered town, insisting the military is now in charge and is chasing the rebels into the countryside. But it is not clear what kind of lives people will return to when they come back. The aftermath of the killings and looting is tangible.

The streets are deserted, except for government soldiers. Tens of thousands of residents fled across the White Nile River earlier this month as rebels rushed in. Thousands of others took refuge in a nearby U.N. camp, where they remain under the protection of U.N. soldiers.

In Bor’s hospital, the smell of death is overwhelming. A body lies stiffly on a hospital bed. The pools of dry blood beneath suggest the person has been dead for quite a while.

A frail woman, who identified herself only as Mary, was caring for two other women sleeping on a mattress in an empty ward. She said she had to help those too weak to flee the fighting.

“I am here to help them. They are sick, cannot move. It is my duty,” she said.

A U.N. humanitarian charter plane on Tuesday will deliver humanitarian supplies, including medicine and medical equipment, UNICEF, the U.N. children’s agency, said in a statement Monday.

As the U.N. increases its involvement in South Sudan, friction between the government and the global body is increasing, with Kiir accusing it of trying to take over the country.

The U.N. complained Sunday that senior members of the government tried to enter the U.N. base and that the military threatened its staff when they refused soldiers entry.

“This incident is just one of a growing number of violations … making it increasingly difficult for (the U.N.) to implement its mandate and dangerous for United Nations staff working in South Sudan,” it said.

South Sudanese officials strongly disputed the U.N.’s version of events. John Kon Kelei, a spokesman at the Information Minister, said the U.N. was distorting the facts.

Kiir told a news conference that he submitted an official request to the U.N. to return guns he said fighters have inside the camp.

He said U.N. Secretary-General Ban Ki-moon should make it clear the U.N. wants to take over South Sudan.

“We know the U.N. is in South Sudan. We did not know that when (the mission) was brought that it was brought as a parallel government,” Kiir said.

South Sudan became the world’s newest country in 2011, when it broke away from Sudan after an independence vote, the capstone of decades of fighting.

The country, one of the world’s poorest, derives nearly all of it income from an oil industry that has mostly been idled since the fighting broke out.