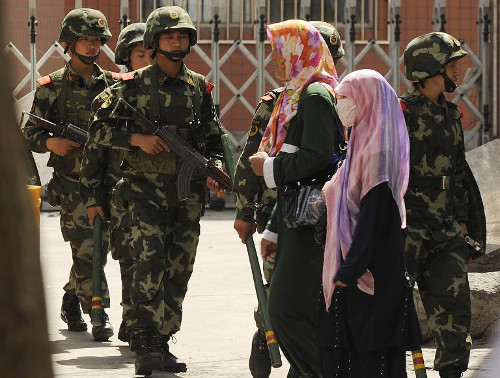 Six women were among more than a dozen ethnic minority Uyghurs shot dead by security forces in China’s troubled northwestern region of Xinjiang this week in violence triggered by the lifting of a woman’s veil by a police officer, according to residents and sources.

The government had said that police had killed 14 Uyghurs on Sunday when they were attacked by a “terror gang” while attempting to detain criminal suspects in Kashgar prefecture’s Konasheher (in Chinese, Shufu) county.

Two police officers had also been killed in the violence in Konasheher’s Saybagh (in Chinese, Sayibage) village, according to the government of the Xinjiang Uyghur Autonomous Region.

But a meeting in Saybagh on Tuesday led by officials of the local ruling Chinese Communist Party branch was told that 16 Uyghurs were shot dead, including six women, when police raided a large house of an extended family, sources told RFA’s Uyghur Service.

The Uyghurs who were killed left behind 21 young children, including a 55-day-old baby, the sources said.

The Konasheher internal security chief and the Saybagh police station chief were among those killed in the raid conducted as part of investigations into a previous violent incident, the sources said.

“Just as they entered the door, one terrorist rushed out and killed the county internal security chief,” one source who was informed of the meeting proceedings told RFA. “The police station chief was also beaten to death in the front yard of the house.”

In addition, the occupants of the house had attacked a police car and “exploded it with a bomb,” the source said, suggesting that police then opened fire and killed the 16.

The source said the meeting was also informed that a four-barreled shooting device and eight bombs were discovered at the scene.

‘Revenge’ sought
Local Communist Party officials had sought “revenge” at the meeting for the death of the two senior security officers, calling for tighter security measures and vigilance against “bearded men and women who covered their faces with veil.”

In recent months, dozens of Uyghurs accused of terrorism have been shot dead in lightning raids in Xinjiang, home to some 10 million mostly Muslim Uyghurs who say they have long suffered ethnic discrimination and oppressive religious controls under Beijing’s policies.

The Munich-based exile World Uyghur Congress (WUC) said that the Saybagh violence was the latest of a string of Uyghur killings in Xinjiang by Chinese security forces “in what is becoming a new trend of state-sponsored violence.”

Saybagh residents who spoke to RFA disputed the official version of the circumstances that led to the violence, with one of them saying that village police chief Memet Sidiq had triggered the incident by lifting the veil of a woman during the raid on the house.

Wedding preparations
The resident, speaking on condition of anonymity, said the police raid occurred when the Uyghur family was holding a meeting in preparation for a wedding ceremony next month.

“The police chief, Memet Sidiq, lifted the veil of the wife of one of four brothers in the house as he entered a room to investigate,” the resident said. “Then all the brothers attacked the police chief and this triggered the incident.”

Another resident said the Uyghur family adhered strictly to Islamic beliefs, identifying the head of the household as Islam Ismayil.

“The Ismayil household was so big and so disciplined and, of course, they cannot accept any unethical actions, like lifting the veil,” the resident said, also speaking on condition of anonymity.

“I don’t believe the family can make bombs or keep weapons at home,” the resident said. “If it is true, then they may have taken this step after facing continuous troubles.”