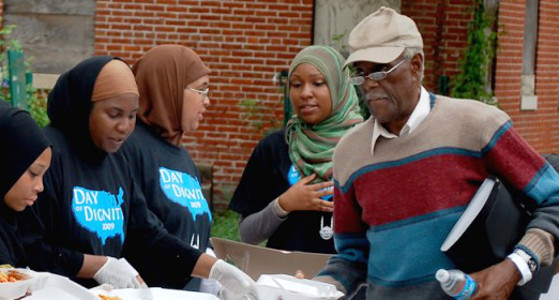 Sending a light of hope for the homeless, a leading mosque in southeast Dallas has been serving the vulnerable in his community for months, presenting more than 15,000 free meals  to Muslims and non-Muslims.

“It was borne out of a need because our area is poverty stricken; there are homeless shelters in the area, there are people sleeping under bridges, and so on,” Muhammad Abdul-Jami, treasurer of Masjid al Islam and coordinator of the Day of Dignity event, told Christian Science Monitor.

Located in an area where homeless are regularly seen, the mosque has been organizing weekly events to feed the needy.

According to the Anti-Poverty Coalition of Greater Dallas, statistics shows that 23 percent of people living in Dallas County have incomes under the federal poverty line.

The percentage was much higher than the 17 percent recorded across the state of Texas and 14.3 percent nationally.

Noticing the increasing need in the area, the event was organized in conjunction with the national charity Islamic Relief USA.

Accusing the government of failing their responsibilities, Churches regularly feed the homeless on Sundays after services.

Masjid al Islam mosque also sees helping in this way as its duty.

“I believe the onus is on the citizens and the community to decide whether we want our elected officials to do more,” Abdul-Jami says.

“Left to their own devices, they are not going to make it a priority. We are trying to do that. This is something we can do on our own.”

The “Day of Dignity” was introduced nationwide ten years ago, aiming at serving homeless and vulnerable Americans, whether Muslim or not.

Every year, the nation-wide effort aims to serve more than 20,000 homeless and people in need in 15 cities throughout the United States.

People receive health screenings, free food, and a variety of goods depending on their particular city.

The charitable events have offered Muslims an opportunity to help their needy neighbors, and encourage volunteerism in the society.

“We want to encourage volunteerism, to get people to be active and do something to help their fellow human beings,” Abdul-Jami says.

The mosque’s outreach events also helped to introduce a correct image of Islam.

“There are millions of Muslims in this country who are very regular people, people who [other] Americans might consider much like them,” Abdul-Jami says.

“They have jobs, families, and similar concerns, hopes, and experiences.

“These events help us showcase that we are concerned about the rest of humanity, not just wanting to help Muslims.

“In fact, we mostly help non-Muslims,” he says.

“And we work with other agencies, nonreligious and nonprofits, to reach out because we all have a similar concern: We want to see relief for those who have the strongest need.”

Since the 9/11 attacks, US Muslims have complained of discrimination and stereotypes because of their Islamic attires or identities.

Despite the frenzy, they seized the opportunity to introduce a true message of Islam, through activism.

Extending new bridges into the community, new groups were established, such as American Muslim Voice, founded by Samina Sundas of Palo Alto.

There is also the Council on American-Islamic Relations (CAIR), which was founded to help Muslims engage with their neighbors in civic life.