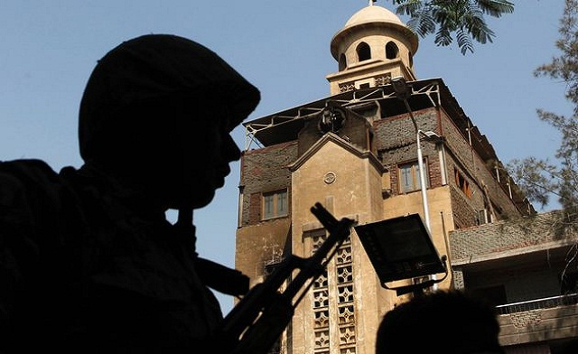 In late September, retired senior U.S. military officials were part of a delegation that went to Egypt on a visit organized by Virginia-based think tank the Westminster Institute (WI), returning to D.C. to hail the Egyptian military’s intervention and deny there had been a coup. Delegates, many linked to conservative think tanks and Christian organizations, spent two days conducting various meetings, including a two hour-long audience with Al-Sisi, as well as Amr Moussa, Tamarod leaders, Coptic Church head Pope Tawadros II, and “local businessmen”.

The post-trip press conference was held at the Press Club in D.C., where delegates expressed excitement and enthusiasm about the military takeover, with one participant hailing Al-Sisi as “almost Washingtonian“. The WI delegation urged the U.S. administration to fully support the Egyptian military so as not to lose a crucial American ally in the region.

Yet in August, Human Rights Watch condemned Egyptian security forces’ “rapid and massive use of lethal force to disperse sit-ins”, which the international organization called “the most serious incident of mass unlawful killings in modern Egyptian history”. In October, Amnesty International cited “excessive and unwarranted lethal force” by security forces. More than 1,000 people have been killed in the military crackdown, with some 2,000 detained.

The WI delegation was co-led by retired Major General Paul Vallely and Patrick Sookhdeo, Chairman of the Board of the WI and International Director of UK-based Christian charity Barnabas Fund (for whom he wrote an article about the trip titled ‘Rejecting Islamic Extremism Abroad – And At Home’). Vallely is the founder of ‘Stand Up America US’ (which also publicised the delegations’ findings) and is involved with a number of right-wing initiatives. He has defended force-feeding at Guantanamo Bay, questioned if President Obama is a “natural-born citizen“, and spoke at the ‘Jerusalem Summit‘ which sees Israel at the centre of a war for “Judeo-Christian civilization“.

According to Vallely, the delegation’s meetings were set up by Tera Dahl, described as a “Westminster Institute congressional fellow”, and who, in a piece published in August, is also named as Stand Up America US’s “Senior Middle East Correspondent“. Interestingly, Dahl has worked as personal assistant to Christian right-favourite Rep. Michele Bachmann, who went on a much ridiculed visit to Egypt where she expressed gratitude to the Egyptian military and linked the Muslim Brotherhood to 9/11. More recently, Bachmann has claimed that Obama’s policy on Syria is a sign of the Biblical ‘End Times’.

Bachmann has been an enthusiastic proponent of investigating alleged “deep penetration” in the U.S. government by the Muslim Brotherhood, efforts in which Tera Dahl apparently played a key role, and for which she was praised by S. Gorka for her “incredible work”. What Salon called Bachmann’s “Muslim witch hunt” prompted the Anti-Defamation League to urge those responsible to stop “trafficking in anti-Muslim conspiracy theories.” In an article on Michele Bachmann’s trip to Egypt in The New York Times, political scientist at the University of Oklahoma Samer Shehata noted “a confluence of interests among the coup leaders in Egypt and Islamophobes in the Congress”.

But what of the Westminster Institute itself? Founded in 2009, its mission is to promote “individual dignity and freedom for people throughout the world by sponsoring high-quality independent research with a particular focus on the threats from extremism and radical ideologies”. Beginning with a first year income of just over US $20,000, the WI’s income has since risen to a total income of US $289,649 in 2012.

The only member of staff listed on its website is Executive Director Katharine Gorka, wife of Sebastian. K. Gorka’s recent work includes co-editing a book with Patrick Sookhdeo on ‘Fighting the Ideological War: Winning Strategies from Communism to Islamism‘. The book was hailed in The Washington Times as possibly “the most important one you will read this year” by Peter Hannaford, a public relations professional who worked with Ronald Reagan.

WI events and speakers have included a September day conference at the U.S. Capitol Visitor Centre on ‘Al Qaeda and the Muslim Brotherhood: A New American Strategy‘, where Sookhdeo reportedly told delegates America must “‘rediscover an identity’ in ‘Judeo-Christian’ faith-based freedom and virtue”. Other past WI speakers have presented on ‘Countering Subversion‘ and described the U.S. as “the last bastion of freedom and the hope of all man living under tyranny”.

Egypt delegation participant Sebastian Gorka has also contributed to the think tank’s output. S. Gorka is connected to different right-wing groups, including the pro-Israel Endowment for Middle East Truth (EMET). At their 2012 seminar on U.S. foreign policy featuring Gorka and others, the WI was recommended to the audience alongside groups like ACT! For America as a means of “telling the truth” on Capitol Hill.

A look at the WI’s board of trustees sheds further light on the think tank’s agenda and connections. Board member Robert Reilly worked in the Reagan White House, and is the author of ‘The Closing of the Muslim Mind‘. Reilly is a board member of the Middle East Media Research Institute (MEMRI) and believes “there is no such thing as a Palestinian people”. In a recent interview with Frank Gaffney (who praised the WI as one of his “all-time favourite organizations in Washington”), Reilly attacked “multiculturalism” and stressed the need to “regain your faith” to “fight this Islamist onslaught”. Reilly spoke of “spiritual warfare”, and cited Britain as an example where “the Muslims in that country…are a problem” despite being only 3% of the population, due to “the loss of faith in Great Britain in their own religion and institutions and ideals”.

However Reilly aside, the WI’s board is dominated by individuals closely associated with UK-based Christian charity Barnabas Fund. The Barnabas Fund’s remit is to “support Christians where they are in a minority and suffer discrimination, oppression and persecution as a consequence of their faith”. It has organized a petition on halal, “Say No to the Islamisation of Our Food”, which it claims “is being used as an underhanded way of furthering the Islamisation of the country”.

The most high profile individual connecting the BF and WI is, of course, the former’s International Director and the latter’s Chair of the Board, Patrick Sookhdeo. Writing just days after 9/11, Sookhdeo asserted that Islam “justifies the use of all forms of violence” and that “the World Trade Centre attack cannot be dismissed as merely the work of a small group of extremists”. Sookhdeo believes “the brutality of contemporary Islamic terrorists…obviously harks back to such paradigmatic examples from Muhammad’s life“, while talking to a Christian website, Sookhdeo said “we must be thankful that today there are more Muslims becoming Christians than ever before in history”. Sookhdeo is a signatory to the US-based “Coalition to Stop Shariah“, alongside many other familiar names and groups.

The WI’s board also includes Patrick Sookhdeo’s wife Rosemary Sookhdeo, author of ‘Secrets Behind The Burqa‘. Other WI board members Albrecht Hauser and Caroline Kerslake are also board members of the Barnabas Fund (UK) and Barnabas Aid (U.S. non-profit) respectively. Another WI board member Brenda Dobbs is wife of Julian Dobbs, board member for Barnabas Aid, with the WI website featuring a sermon by the latter on “One Lord Or Many Gods? Can the God of the Bible and the God of the Koran be the same?” J. Dobbs has previously warned of “a growing Islamic ideology in the U.S. that clearly wants to see Sharia law applied here”. Past “Senior Fellow” at the WI Marshall Sana was working at the Barnabas Fund at the same time, following a position at the Discovery Institute.

Aside from the personal connections, the WI is based at a property owned by the Barnabas Fund. While the WI contact information gives a street address of 6729 Curran St., Mclean, VA, event information has given an address of 6731 Curran St. Barnabas Aid lists its address as 6731, while Isaac Publishing – publishing house for many Sookhdeo books -as well as the Institute for the Study of Islam and Christianity – of which Sookhdeo is the director – both have the same street address: 6729 Curran St.

When I asked Katharine Gorka to clarify the relationship between the WI and the Barnabas Fund, in light of the strong links in personnel, property, and board members, she said that “the two organizations are close” but are “legally separate and with different missions. Barnabas is a charity. Westminster is a think tank.”

The support for the Egyptian military and attacks on Islamism by the Westminster Institute and its fellow travellers comes across as a revival of Reagan-era style conservative politics and foreign policy, a comparison made by a number of the people mentioned in this article. In fact, an upcoming event at the WI will see Kenneth deGraffenreid, Senior Director of Intelligence Programs at the National Security Council during Reagan’s presidency, discuss “Information Warfare and the Muslim Brotherhood”. Comparing Al-Jazeera to “Nazi and Soviet broadcasts”, WI head Katharine Gorka has recommended the creation of a new Active Measures Working Group, a Reagan-era propaganda initiative.

The common cause for the Christian right and these so-called security experts is support for bloody, undemocratic repression abroad, and the targeting of Muslim groups at home – and indeed making the link between the two. At a WI lecture, Sebastian Gorka cites Frank Gaffney and asks the question “if the Egyptian people can reject the Brotherhood there why can’t we reject them in America?” Al-Sisi seems to have given ‘Fear, Inc.‘-style politics a new lease of life.