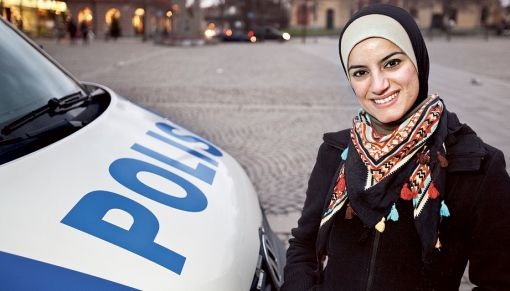 Racial tension has been on raw display in recent months across Europe.

Reports from non-governmental organizations such as European Network Against Racism (ENAR) confirm a dramatic increase of racist violence in recent years. More than 5,000 hate crimes were reported in Sweden in 2012 of which 74 percent were related to racism and xenophobia. Muslims, Roma, and asylum seekers are some of the most vulnerable groups throughout Europe, especially Muslim women who wear the headscarf.

A recent example is when riots broke out in Trappes, outside of Paris, in July after a routine police check on a woman who was asked to remove her face veil (as is required under French law). Officials of all political stripes defend France’s secular law, called the burqa ban, which prohibits women from covering their entire face in public spaces. After the incident in Trappes, Interior Minister Manuel Valls said that the 2010 law “must be enforced everywhere,” according to the Economist because it’s in the “interests of women.”

But women (and some men) across Sweden are donning headscarves and posting pictures of themselves on Twitter and Instagram in protest. They are not Muslim immigrants fighting to protect their cultural norms. Rather, they are politicians and TV personalities staging a “hijab outcry” to show solidarity with Muslim women.

The protest comes after a pregnant woman wearing a veil was assaulted two weekends ago in Sweden. Police spokesman Ulf Hoffman said an unknown assailant had attacked the woman in the suburb of Farsta by banging her head against a car. The attacker then reportedly tore off her headscarf and shouted racial insults.

Veiled campaigners said they want to draw attention to the “discrimination that affects Muslim women” in Sweden, and that the goal of the “hijab outcry” is to demand that the government “ensure that Swedish Muslim women are guaranteed the right to … religious freedom.”

The initiative has inspired similar actions in other places such as Brussels. Lately, acts of public resistance against intolerance have also occurred in Germany and the Czech Republic.

Some people have an opposite opinion about the matter. Hanna Gadban, a feminist Muslim commentator, believes the campaign is counterproductive.

“We talk naive about human rights. Should we give men power and confirmation that they have the right to force their women and children to veil themselves?” she told the Swedish news site, Aftonbladet. “This reinforces racism I see the veil as a cultural, religious, sexual and political symbol. How many women choose to veil themselves? In my experience, it may be around 10 percent who choose it without pressure.”

It’s a delicate, controversial issue: how to demonstrate one’s Muslim faith and tradition in western European countries such as Sweden, France or Great Britain, particularly in an increasingly hostile environment for immigrants generally, and especially Muslim immigrants, in those places. But people need to stop acting like it’s Muslim women’s fault for getting attacked.

Muslim or not, women should be able to walk down the street without being subjected to verbal and physical violence. I respect the Swedish campaigners for promoting that.