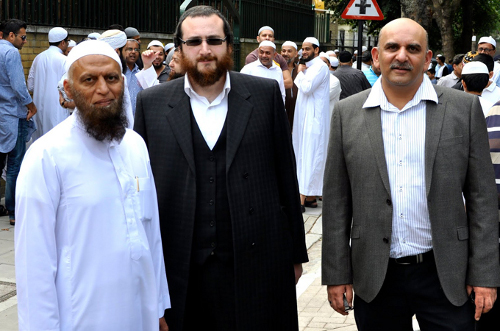 London – Jewish neighbourhood watch group Shomrim cooperates with Muslim leaders to bolster security and protect mosques after threats to a Muslim community in an area of north-east London.
The initiative is in the Stamford Hill neighbourhood of Hackney. Shomrin is an ultra-orthodox volunteer organization. It describes itself as “the eyes and ears of the police.” While the group was formed to protect against anti-Jewish acts, it now is helping out the Muslim community and also advising Muslim leaders on security measures.The supervisor of Shomrim, Chaim Hochhauser told Al Jazeera;“We keep an eye on all the mosques. If we see anything suspicious, we’ll take down a car registration number, report it to the police, keep it for intelligence, log the call and hopefully there won’t be any trouble” .Muna Zeena, who is chair of the North London Muslim Community Centre, said the arrangement with Shomrim was prompted by a series of attacks targeting mosques and Muslims. These attacks increased after Lee Rigby, a British soldier, was killed in May in South London.

Stamford Hill has the largest group of Haredi Jews in Europe many refugees from Nazi-occupied Europe or Holocaust survivors from the 1930s and 40s. The community of 20,000 or so has its own synagogues, schools, and stores. However, about 14 per cent of the area is also Muslim.

Ian Sharer, a local councillor, brought the leaders of the Muslim community centre and Shomrin together last June. The orthodox Jews and Muslims in the area have long lived side by side in peace. Sharer said:“People just get on with their lives, bring their children up, study their own laws, pray to their God.People walk side by side to the mosque and the synagogue, and we like to see it.”

The Shomrim watch group is modeled on similar groups established in Haredi neighbourhoods of New York. They were established first in 2005 after a wave of anti-semitic crimes. Sharer said:“Anybody who doesn’t like Jews probably doesn’t like black people, doesn’t like Sikhs, doesn’t like anybody. It’s unfounded hatred. Anyone who says they don’t like Muslims, there’s something wrong. It’s a bigoted view.”

A Muslim community advocate in Hackney Eusoof Amerat said of the new cooperative arrangement: “Shomrim has been patrolling this neighbourhood for many years now and when they pass the mosque they don’t close their eyes. But this makes it legitimised and the community now knows we are working together. Forget about race, forget about ethnicity, we are living together. And how can we live together without respecting and tolerating each other’s viewpoint, faith and customs?”

Shomrim operates a 24-hour emergency line. Volunteers pass on information to police and attend the scene of reported incidents. They do not have powers of arrest. Matthew Horne of the Metropolitan Police, the local borough commander, said that the police had an excellent relationship with Shomrim. The local Muslim community intends to use Shomrim as a model to set up its own neighbourhood group. Hochhauser welcomed the idea of a Muslim patrol joining with Shomrin in patrols.

Zeena paid tribute to the Jewish community who welcomed Muslims and helped them settle in the area. The Jews supported them in establishing the first mosque in Hackney. It is nearly a decade since the group established a Muslim-Jewish forum to deal with issues of concern to both groups. Zeena said in conclusion:“It took great risks and understanding between the Jewish group and the Muslim group to say we are not enemies of each other. We live side by side and we share many of the same problems. This is about living together as neighbours and human beings, respecting each other and tolerating each other.”