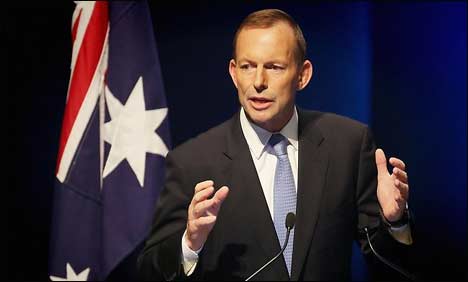 “The near consensus in favor of Tony Abbott to replace Kevin Rudd as the nation’s next PM comes as the Liberal Party reportedly plans to upgrade relations with Jerusalem, make visa applications easier for Israelis, ban more terror groups and stop financial support to any organization that supports the boycott Israel campaign,” said Goldberg.

On August 15, 2013, Australia’s outgoing foreign minister Bob Carr was condemned by the Jewish Lobby for agreeing with British foreign secretary William Hague that all Israeli settlements are illegal under international law.

Antony Loewenstein, an Australian Jewish writer, author and blogger, wrote at British daily Guardian: “Abbott’s view on foreign policy are rarely discussed, but he seems to retain a Bush administration perspective on the world – ‘You’re either with us or against us‘.”

“When I met Abbott in Sydney in 2010 and challenged him to learn more about Israel’s flouting of international law, he reverted to familiar, right-wing Zionist talking points. Both the Liberal party and Zionist lobby remain upset that in 2012, Australia didn’t reject Palestine’s statehood at the UN. Foreign affairs spokesperson for the Coalition, Julie Bishop, has pledged to return Australia to an uncritical stance towards Israel, placing us in a very isolated position globally. (The Greens, especially senator Lee Rhiannon, condemns Israel’s destruction of aid projects in Palestine, some of which are funded by Canberra),” wrote Loewenstein. Read full article here.

Abbott has promised the Jewish Lobby a visa free entry to Israeli Jews (only the US and Canada have such facility extended to Israelis), to ban or oppose the BDS movement, and to ban or restrict entry to any person having ties with Hamas or Hizbullah.

And when it comes to social policy, while Tony Abbott stated last month that he believes in a traditional marriage between a man and woman, his sister Christine Forster, is a lesbian, which is considered as being a form of ‘woman’s liberation’ by many organized (secular) Jewish groups. What this could mean in terms of public policy is something time is certain to tell.