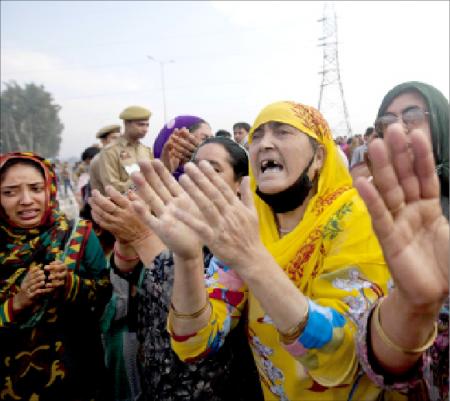 SRINAGAR: A protest erupted Saturday after Indian police said they killed two alleged militants and two civilians in the disputed Himalayan territory of Kashmir, while authorities maintained tight security for a classical music concert being staged amid separatist objections.
Inspector General Nalin Prabhat said police were retaliating against alleged militants who had opened fire on a police camp in the area, which is about 50 kilometers (30 miles) south of Srinagar, the main city in the Indian portion of Kashmir.
Police said they recovered weapons and were working to identify the militants. They said two civilians were also killed and one person was injured in the shootout.Hundreds of residents, disputing the police account, swarmed the streets of the main town in Shopian district after the shooting. Police fired tear gas and used batons to disperse the crowds.
Adil Ahmed, a 26-year-old student shot twice in the stomach, said from a hospital that there were no alleged militants, and that police opened fire unprovoked. He said the two accused by police were actually students riding a motorcycle to an exam center to take tests.
Meanwhile, just north of Shopian, suspected separatists hurled a grenade at a group of law enforcement officers standing outside Pulwama district hospital, police said. Nine people were injured, including two civilians, they said.
Kashmir is divided between India and Pakistan, with separatists in Indian-held Kashmir demanding independence or a merger with predominantly Muslim Pakistan.
Srinagar was under tight security Saturday amid separatist calls for a strike to protest a Bavarian orchestra’s concert with renowned conductor Zubin Mehta. Government buses shuttled concert guests to the outdoor garden venue on the city’s outskirts.
The separatists objected that the concert served to divert attention from Kashmir’s problems.
“We have nothing against Zubin Mehta … no one is against the event itself. But it has assumed political overtures, as an attempt is being made that everything is normal and peaceful in Kashmir, which is not the case,” Mirwaiz Umer Farooq, a separatist leader, told reporters in Srinagar.
Civil society groups organized an alternative concert in central Srinagar, where they were also showing photographs and giving speeches meant to highlight past years of violence and instability in the region.
_________________________
Zubin Mehta in Srinagar: We hurt some inadvertently, next concert will be for allSrinagar, September 7 (AGENCIES): Zubin Mehta’s highly anticipated peace concert was held in Srinagar’s Shalimar Bagh amid heavy security. Called Ehsaas-e-Kashmir, the event, a first of its kind in Kashmir, was organised by the German ambassador to India, Michael Steiner.
Soulful strains of some of the most popular and best-known western classical music compositions reverberated in the majestic backdrop of Zabarwan Hills when the famous conductor performed before a select audience on the banks of the famous Dal Lake.
“I have waited for this moment for a long time. There are those we have hurt inadvertently. I promise next time we shall do this with everyone in a stadium where everyone can come, so it won’t be a select few. When the music starts, a positive wave goes from this stage everywhere,” 77-year-old Mr Mehta said before his performance.
In the 400-year-old Mughal garden with its magnificent chinars, some as old as 300 years and more, Mr Mehta and his Bavarian State Orchestra played its full cast of works of Ludwig Van Beethoven, Franz Joseph Haydn and Pyotr Ilyich Tchaikovsky.
The concert began with the India-born maestro leading the orchestra along with Abhay Sopori’s troupe with traditional Kashmiri instruments.
The concert hit a controversial note with Kashmiri separatists calling it an attempt to digress from the human rights violations in the state. The separatists held a total shutdown of Srinagar in protest.
Reaching out to the separatists yesterday, Mr Mehta said, “I didn’t choose Kashmir, Kashmir chose me. Music is the message of peace, and music only brings peace.”
A counter concert, called Haqeeqat-e-Kashmir to highlight, what its organisers say, the turmoil of the people over the last two decades, was also held, 10 km away from the Zubin Mehta concert.
Tags: deadly police shooting in Kashmir disputed Himalayan territory Ehsaas-e-Kashmir Indian portion of Kashmir Inspector General Nalin Prabhat Kashmir Kashmir’s problems