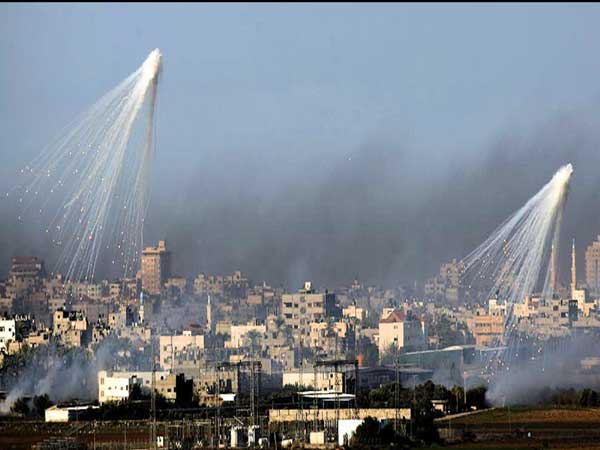 The Palestinians have been the victims of genocide as defined by the 1948 Convention on the Prevention and Punishment of the Crime of Genocide. I say that because of my practical experience: On 8 April 1993 and 13 September 1993 I single-handedly won two World Court Orders on the basis of the 1948 Genocide Convention that were overwhelmingly in favor of the Republic of Bosnia and Herzegovina against Yugoslavia to cease and desist from committing all acts of genocide against the Bosnians in violation of the 1948 Genocide Convention. This was the first time ever that any Government had won two such Orders in one case since the World Court was founded in 1921. On 5 August 1993 I also won a so-called Article 74(4) World Court Order for Bosnia against Yugoslavia for genocide. According to I.C.J. Statute Article 74(4), when the full World Court is not in session in The Hague, the President of the Court exercises the full powers of the Court and can issue an Order to the parties in a lawsuit that is legally binding upon them.

Article II of the Genocide Convention defines the international crime of genocide in relevant part as follows:

In the present Convention, genocide means any of the following acts committed with intent to destroy, in whole or in part, a national, ethnical, racial or religious group such as:

(b)        Causing serious bodily or mental harm to members of the group;

(c)        Deliberately inflicting on the group conditions of life calculated to bring about its physical destruction in whole or in part;

As documented by Israeli historian Ilan Pappe in his seminal book The Ethnic Cleansing of Palestine (2006), Israel’s genocidal policy against the Palestinians has been unremitting, extending from before the very foundation of the State of Israel in 1948, and is ongoing and even now intensifying against the 1.75 million Palestinians living in Gaza as this Tribunal convenes here today. As Pappe’s analysis established, Zionism’s “final solution” to Israel’s much-touted and racist “demographic threat” allegedly posed by the very existence of the Palestinians has always been genocide, whether slow-motion or in blood-thirsty spurts of violence.  Indeed, the very essence of Zionism requires ethnic cleansing and acts of genocide against the Palestinians.  For example, concerning the 2008-2009 Israeli slaughter of Palestinians in Gaza – so-called Operation Cast-lead — U.N. General Assembly President Miguel d’Escoto Brockmann, the former Foreign Minister of Nicaragua during the Reagan administration’s contra-terror war of aggression against that country which was condemned by the World Court, condemned it as “genocide.”[1]

Nevertheless, apologists for Israel have argued that since these mass atrocities are not tantamount to the Nazi Holocaust against the Jews, therefore they do not qualify as “genocide.” Previously, I had encountered and refuted this completely disingenuous, deceptive and bogus argument against labeling genocide for what it truly is, when I was the Lawyer for the Republic of Bosnia and Herzegovina arguing their genocide case against Yugoslavia before the International Court of Justice. There the genocidal Yugoslavia was represented by Shabtai Rosenne from Israel as their Lawyer against me.  Rosenne proceeded to argue to the World Court that since he was an Israeli Jew, what Yugoslavia had done to the Bosnians was not the equivalent of the Nazi Holocaust against the Jews and therefore did not qualify as “genocide” within the meaning of the 1948 Genocide Convention.

I rebutted Rosenne by arguing to the World Court that you did not need an equivalent to the Nazi Holocaust against the Jews in order to find that wholesale atrocities against a civilian population constitute “genocide” in violation of the 1948 Genocide Convention.  Indeed the entire purpose of the 1948 Genocide Convention was to prevent another Nazi Holocaust against the Jews. That is why Article I of the Genocide Convention clearly provided:  “The Contracting Parties confirm that genocide, whether committed in time of peace or in time of war, is a crime under international law which they undertake to prevent and to punish.”  (Emphasis supplied.)  You did not need six million dead human beings in order to constitute “genocide.”

Furthermore, in support of my successful 1993 genocide argument to the World Court for Bosnia, I submitted that Article II of the 1948 Genocide Convention expressly provided: “In the present Convention, genocide means any of the following acts committed with the intent to destroy, in whole or in part, a national, ethical, racial or religious group, as such…” (Emphasis supplied.)  In other words, that to be guilty of genocide a government did not have to intend to destroy the “whole” group as the Nazis intended to do with the Jews. Rather, a government can be guilty of genocide even if it intends to destroy a mere “part” of the group.  Certainly Yugoslavia did indeed intend to exterminate all Bosnian Muslims if they could have gotten away with it, as manifested by their subsequent mass extermination of at least 7,000 Bosnian Muslim men and boys at Srebrenica in July of 1995.  I would later become the Attorney-of-Record for the Mothers of Srebrenica and Podrinja at the International Criminal Tribunal for the Former Yugoslavia (I.C.T.Y.).  In that capacity, I convinced the I.C.T.Y. Prosecutor Carla Del Ponte to indict Yugoslav President Slobodan Milosevic for every crime in the I.C.T.Y. Statute for the atrocities he inflicted upon the Bosnians, including two counts of genocide — one count of genocide for Bosnia in general, and the second count of genocide for Srebrenica in particular.  Milosevic died while on trial in The Hague after the I.C.T.Y denied his Motion to Dismiss these charges after the close of the Prosecution’s case.

But in 1993 it was not necessary for me to argue to the World Court that Yugoslavia intended to exterminate all the Bosnian Muslims.  Rather, I argued to the World Court that at that point in time the best estimate was that Yugoslavia had exterminated about 250,000 Bosnians out of the population of about 4 million Bosnians, including therein about 2.5 million Bosnian Muslims.  Therefore, I argued to the World Court that these dead victims constituted a “substantial part” of the group and that the appropriate interpretation of the words “or in part” set forth in Article II of the Genocide Convention should mean a “substantial part.”

The World Court emphatically agreed with me and rejected Rosenne’s specious, reprehensible, and deplorable arguments.  So on 8 April 1993 the International Court of Justice issued an Order for three provisional measures of protection on behalf of the Republic of Bosnia and Herzegovina against Yugoslavia that were overwhelmingly in favor of Bosnia to cease and desist from committing all acts of genocide against all the Bosnians, both directly and indirectly by means of its Bosnian Serb surrogates. This World Court Order for the indication of provisional measures of protection was the international equivalent of a U.S. domestic Temporary Restraining Order and Injunction combined.  The same was true for the Second World Court Order with three additional provisional measures of protection that I won for the Republic of Bosnia and Herzegovina against Yugoslavia on 13 September 1993.  The same was true for the Article 74(4) Order I won for Bosnia against Yugoslavia from the World Court on 5 August 1993.

In its final Judgment on the merits in the Bosnia case that was issued on 26 February 2007, the World Court definitively agreed with me once and for all time that in order to constitute genocide, a state must only intend to destroy a “substantial part” of the group “as such”:

198. In terms of that question of law, the Court refers to three matters relevant to the determination of “part” of the “group” for the purposes of Article II.  In the first place, the intent must be to destroy at least a substantial part of the particular group.  That is demanded by the very nature of the crime of genocide:  since the object and purpose of the Convention as a whole is to prevent the intentional destruction of groups, the part targeted must be significant enough to have an impact on the group as a whole.  That requirement of substantiality is supported by consistent rulings of the ICTY and the International Criminal Tribunal for Rwanda (ICTR) and by the Commentary of the ILC to its Articles in the draft Code of Crimes against the Peace and Security of mankind (e.g. Krstić, IT-98-33-A, Appeals Chamber Judgment, 19 April 2004, paras. 8-11 and the cases of Kayishema, Byilishema,  and  Semanza there referred to; and Yearbook of the International Law Commission, 1996, Vol. II, Part Two, p. 45, para. 8 of the Commentary to Article 17).

In other words, in order to find Israel guilty of genocide against the Palestinians, it is not required to prove that Israel has the intention to exterminate all Palestinians.  Rather, all that is necessary is to establish that Israel intends to destroy a “substantial part” of the Palestinians.  Furthermore, in paragraphs 293 and 294 of its 26 February 2007 Bosnian Judgment, the World Court found that you did not even need 250,000 exterminated Bosnians in order to constitute genocide — let alone six million exterminated Jews.   Rather, even the seven thousand exterminated Bosnian Muslim men and boys at Srebrenica were enough to constitute genocide. According to the World Court, these victims constituted about one-fifth of the Srebrenica community.

Starting in 1948 Israel obliterated about 500 Palestinian villages from off the face of the earth, literally reducing them to rubble now scattered across the Palestinian countryside in order to prevent their ethnically cleansed inhabitants from ever again returning to their homes because they no longer exist.  And the list of Israeli genocidal massacres of Palestinian communities is quite extensive.  To name just a few of Israel’s most notorious acts of anti-Palestinian genocide: Deir Yassin, Tantura, Sabra and Shatilla, Jenin, Nablus, and repeatedly and continuously Gaza.  As we meet here today, Israel is “deliberately inflicting on the [1.75 million Palestinians in Gaza] conditions of life calculated to bring about [their] physical destruction in whole or in part” in gross and flagrant violation of Genocide Convention Article II(c).

In order to prevent yet another and predictable wholesale slaughter and acts of genocide by Israel against the Palestinians in Gaza, the West Bank, Jerusalem, and elsewhere, we most respectfully request this Tribunal to condemn Israel guilty as charged for genocide as well as for war crimes and crimes against humanity.  Article I of the Genocide Convention requires: “The Contracting Parties confirm that genocide, whether committed in time of peace or in time of war, is a crime under international law which they undertake to prevent and to punish.”  The Genocide Convention has been incorporated into the Charter of Kuala Lumpur War Crimes Tribunal by means of Article 10.

Thank you.  And may God be with you when you retire to deliberate upon your Judgment.